Where to get Confederate battle flags 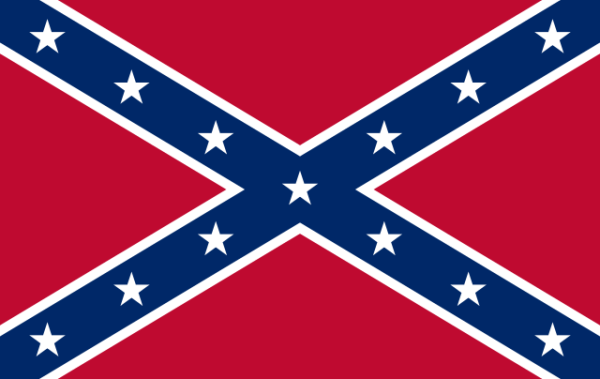 With the recent media/government binge of leftist-fueled demands to remove the Confederate battle flag from as many places as possible, many users are wondering where to get one of their very own.

The Confederacy symbolized resistance to the federal state of America which had been created to enforce a uniform standard among different people, in effect hobbling everyone to the demands of the Crowd. People in cities wanted a type of safety that life cannot provide, and absent a shared culture, they found it in ideology. The Confederacy, like the Founding Fathers, resisted this impulse as it inevitably slides to popular illusions which make people feel validated in their own bad choices by scapegoating any who rise above the lowest common denominator. The Northern States chose to make slavery, a fading institution but still important to Southern livelihoods, their battleground and used the Enlightenment doctrine of “equality” as their justification.

The fracture of the United States remain intact since that time. Most people want — because most people always want this — zero social standards so that they can do whatever they want without consequences, and still receive the protection of society. This denies the historical and logical fact that civilization exists because people come together toward a common purpose of excellence, and administer this through higher standards. The people want lower standards. For this reason, every civilization in history has self-destructed, with for some time America and Western Europe being the exception. That exception has now expired.

Those who wish to resist this process — as any sane person would — desire a rising civilization not just for themselves and their descendents, but for humanity at large. We must evolve above our state of choosing low impulse-control and immediate self-gratification as our goal, but that is what most people want and have always wanted throughout human history. It has only been through the denial of this impulse that civilization, learning, social order and moral decency — the kind that allows people to live safely and dedicate their time to something more interesting that accommodating the dysfunction of others — have arisen.

If you are looking for one way to make your stand, it is in support of the Confederate battle flag, which now joins other banned symbols in the annals of human historical shame. Here are several merchants selling the flag:

I am told these make excellent July 4th decorations. They are also suitable as Christmas gifts, housewarming presents, and Bar Mitzvah gifts. Everyone needs a little color in their lives, and if we are to believe our Western democracies are founded on “freedom” and “liberty” and “equality,” diversity of opinion is also important, especially as our government and social order continues its collapse.