Anti-Tech Revolution: Why and How by Theodore John Kaczynski 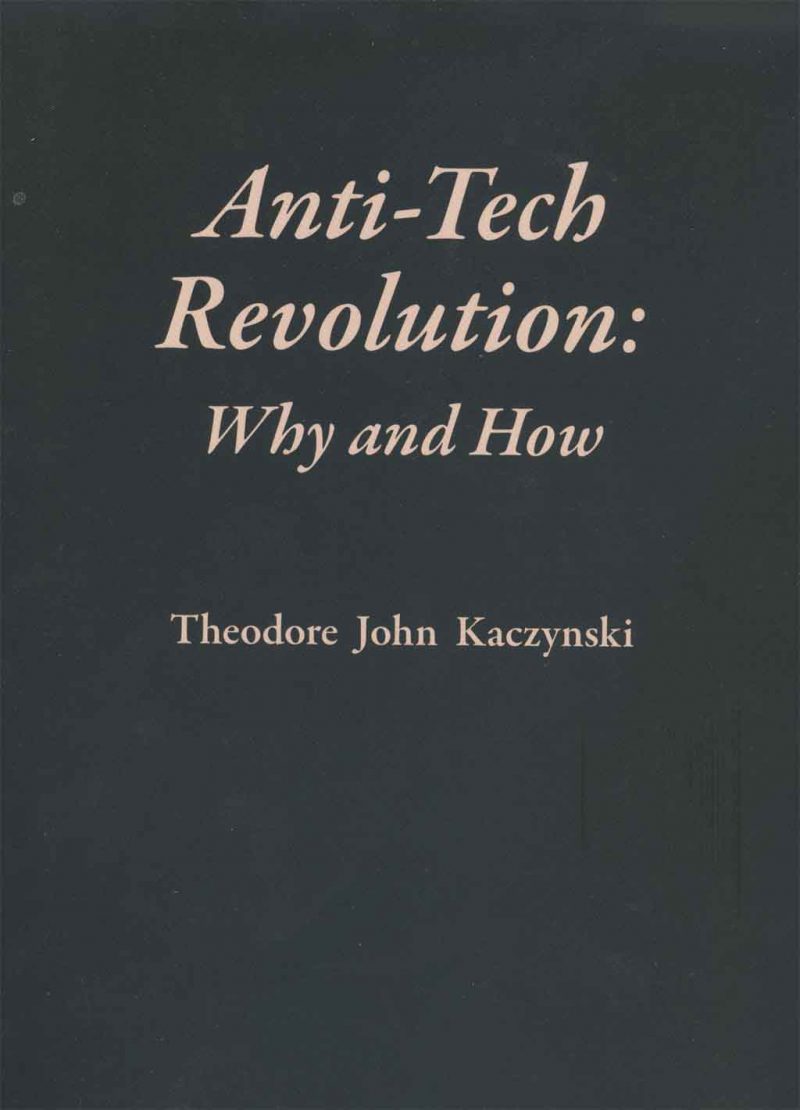 Anti-Tech Revolution: Why and How
by Theodore John Kaczynski
Fitch & Madison Publishers, 236 pages, $14

Humans survive with full knowledge of the time-bomb of their personal mortality, so for most, extending this to the planet we live on appears less disturbing than it should be. We know that space is finite, and humanity keeps growing, and that as our activities pollute air and water, eventually the piper must be paid.

Calling out the lie of our solipsistic oblivion has been a specialty of Theodore John “Ted” Kaczynski, who vaulted to fame in the mid-1990s when he was arrested and charged for mailing bombs to those who described as enemies of the environment and publishing Industrial Society and Its Future, a manifesto describing the inevitable ecocide.

Although all of his arguments make sense, his conclusions in that manifesto might not: clearly the decay in the West arose from The Enlightenment™ and its individualistic mentality, rapidly expanded worldwide, and now we have a planet of de facto sociopaths following the “Me First” dictum that ripened with the 1960s Baby Boomers.

However, as an enabler of this decay, technology — Kaczynski’s chosen target — makes eminent sense, since it provides the force that allows a fundamentally illogical and self-divided society to keep churning forth on the wealth of oil, manufacturing, industrial farming, and other “cushions” against human incompetence and obliviousness.

Even further, Kaczynski’s arguments regarding the nature of modern society, Leftism, and the sheer impact of ecocide distinguish themselves from almost all others by being rigidly realistic in how they describe the workings of the world, and in serving as a wake-up call for those who would rather just roll over and go back to sleep.

With Anti-Tech Revolution: Why and How, Kaczynski targets the more practical question of how revolutions work and through that, how a group of committed deep ecologists could overthrow the current regime and alter society so that it will remain in a quasi-technological state where it cannot do much damage.

This takes us into an analysis of how power systems fall, and how revolutionaries can use force multipliers and political strategies that give a relatively small group a chance to overthrow a deeply entrenched system. It also shows us the problem of growth itself as a form of runaway competition that cannot end except in doom.

Kaczynski’s thesis attacks social Darwinism as well as the idea of government as a vehicle for solutions. He identifies systems of government, politics, and economics as self-propagating systems and points out that systems of this nature are driven by competition from other systems to an infinite growth agenda.

When a self-propagating system grows to be large enough to resist others, however, it either collapses outright or fragments into smaller systems, which means that every system must go through a birth-death cycle where success means not goodness but avaricious growth, and that the growth in turn is a death sentence.

In other words, in human affairs nothing good can last, and anything which does seem like it will last will instead be shortly headed for total collapse. This means that no system which survives the first cut will care about ecocide, since its only mandate is to grow or die.

This restates a paradox known to the ancients, which was that any society which found itself surrounded by neighbors had to grow or it would be conquered. Growth creates unsustainable populations and behaviors because under the law of nature, whoever becomes most powerful — consuming the most resources — avoids destruction by competing groups.

Kaczynski advances this theory to explain why human behavior seems suicidal: we know that we should limit certain behaviors, but the fear of other groups — which, in a Machiavellian sense, is only logical — pushes us to self-destructive levels of activity. Only isolation would cure this, at first.

However, here the second part of Kaczynski’s theory kicks in. If a group killed off all others on the planet, so that it no longer had to compete through growth, it would then fragment internally into smaller groups, which would then compete with each other. No salvation can be found there either.

This leaves us with ecocide as a certainty of any human behavior that is competent enough to master nature, and Kaczynski uses this as a springboard to argue for societies which strongly limit technology and growth through singular power, much as other deep ecologists like Pentti Linkola do.

He suggests that this new stage of humankind can come about through revolution, and then offers some hints for revolutionaries derived from a study of successful revolutions in the past. This part of the book, in my view, will be the most enduring, for it reveals how we got to our present condition; after all, if we take his theory in completeness, the same rules apply to revolutions as to any other self-propagating system, which means that they, too, have been suicidal in their ultimate results.

This explains why ideological takeovers through history have been so concerned with genetics. The Left in France killed off the kings much as the Soviets killed kulaks and Pol Pot shot schoolteachers; with no one remaining but the obedient, the revolutionary government would be in power permanently. This also explains changes in immigration in the West since WW2, since with the original populations destroyed, permanent rule by the revolutionary party would become inevitable (in theory).

Kaczynski examines successful revolutions and finds that those with clear goals, aimed to transform, staffed by committed people, and excluding unsuitable people, tend to succeed. Therein his other postulate kicks in, and he points out that as these revolutions become successful and the founding group die out, they will inevitably become re-purposed for some other end. This expands upon his description of self-propagating systems.

He then assesses previous attempts at anti-ecocidal revolutions and shows where they failed in his rubric, suggesting instead a movement which awaits some kind of system crash and then takes advantage of it to seize power. He grimly describes the present situation and presents practical methods for environmental revolutionaries to organize.

Like all of his work, Anti-Tech Revolution: Why and How provides a systematic analysis that sees through the emotions and surface questions imposed by politics, instead looking toward realistic options in a historical context. It may seem grim, but this book demystifies much of our current situation and the task of undoing it.