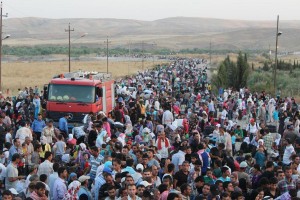 As Europe stands inactive as if dumbstruck by the invasion of migrants eerily presaged by every zombie film, one nation-stateâ€™s leader has attempted to take a defining stance. Angela Merkel made the following revealing statement:

“If Europe fails on the question of refugees, this close connection with universal civil rights … will be destroyed and it won’t be the Europe we want,” she said.

Her statement is correct but not in the way she intends. This mass influx of foreign humans — called â€œrefugeesâ€ by those who wish to obscure the situation by invoking an emotional pity response — poses to Europe a fundamental question of values. Europe can either destroy itself and have universal civil rights, or can continue to exist by discarding that notion as the illusion it is. She said more than she meant to reveal.

Merkel thinks the question for Europe boils down to â€œshould we be nice?â€ This follows the cold shadow of morality currently in vogue: that if our choice is socially popular through a conspicuous display of altruism, we have no need for analyzing its actual effects. In terms of winning votes for the next election, or selling cellular phone plans, she is probably correct. However, the true question that Europe and European-descended people everywhere must face is â€œshould we exist?â€

Choosing to meekly roll back under the advance of aggressive masses while quietly uttering apologies will negate the ability for European values to exist for the simple reason that it will physically negate Europeans. There will no longer be the Europe that Merkel wants because Europe will no longer be.

All other questions are secondary: Europe must decide whether or not it wishes to continue exist. To do so, it must escape the fetishism for universal civil rights that is a political outpouring of the perceived need for social popularity through altruism. It must realize that whether these ideas are foreign or not, they are bad and will result in the destruction of Europe by the destruction of Europeans. As with all other peoples, Europeans are a unique group with capabilities all their own, and when a mass wave of migrants pours in and effectively replaces that group, Europe ceases to be. If our addiction to universal civil rights is, as Merkel says, the seed of our destruction, we should get off that needle now and move on to something healthy instead.

Clarity about our task | One of Us: The Story of Anders Breivik and the Massacre in Norway, by Åsne Seierstad