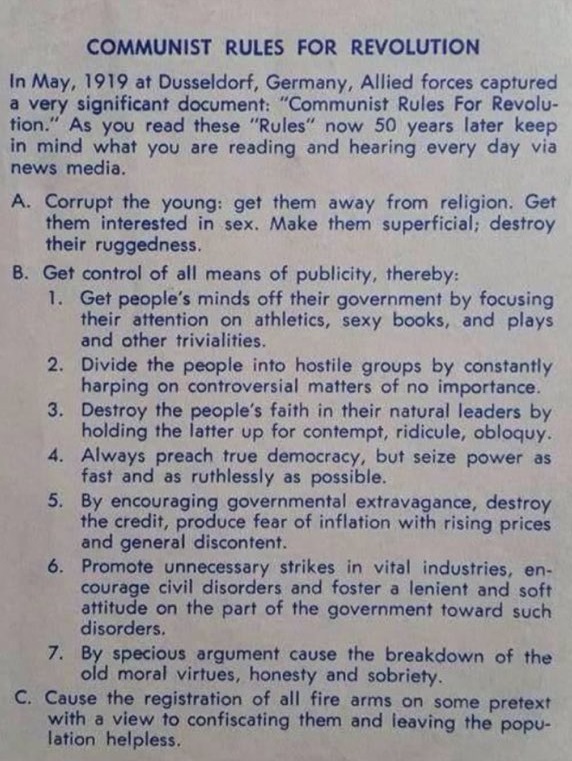 The New York Times says it is a hoax, and while the lügenpresse does one thing well (lying) it also seems like the language in this document is more American and 1940s than Russian or German from the 1910s. However, it endures for the same reason many other hoaxes do, which is that in a semi-satirical but analytical fashion, it describes how Leftists operate.

A careful reading of this text suggests that it is more tongue-in-cheek than previously thought, but also bitterly accurate about what people could see happening even then. The Communist “Rules For Revolution” endure because of that accuracy:

1. Corrupt the young: get them away from religion. Get them interested in sex. Make them superficial; destroy their ruggedness.

2. Get control of all means of publicity. Get peoplesâ€™ minds off their government by focusing their attention on athletics, sexy books, plays and other trivialities.

3. Divide people into hostile groups by constantly harping on controversial matters of no importance.

4. Destroy the peoplesâ€™ faith in their natural leaders by holding the latter up to contempt, ridicule and obloquy.

5. Always preach “true democracy” but seize power as fast and as ruthlessly as possible.

7. Foment strikes in vital industries; encourage civil disorders and foster a lenient and soft attitude on the part of government toward these disorders.

8. By special argument cause a breakdown of the old moral virtues: honesty, sobriety, continence, faith in the pledged word, ruggedness.

9. Cause the registration of all firearms on some pretext with a view of confiscation of them and leaving the population helpless.

We might regard semi-hoaxes — in which it is unclear if they are designed to be taken literally — as a genre of political literature rather than exact historical argument. This document reads like a creative attempt to describe the Left as an organized conspiracy but misses the actual motivation behind Leftists: destruction of everything but the Self, made holy by Enlightenment&trade-style equality.

For that reason, while the above is instructive in recognizing Leftist behavior, looking at Leftist methods serves as less of a gateway to understanding than looking toward the intent and psychology of people involved with Leftism. What we see, independent of techniques used, is a deeply-rooted individualism which consumes all else like an unstable ego expanding to the size of a small star.

In Case You Wondered, Google Supports Politically Correct Censorship Too | “Who Are The Americans?”