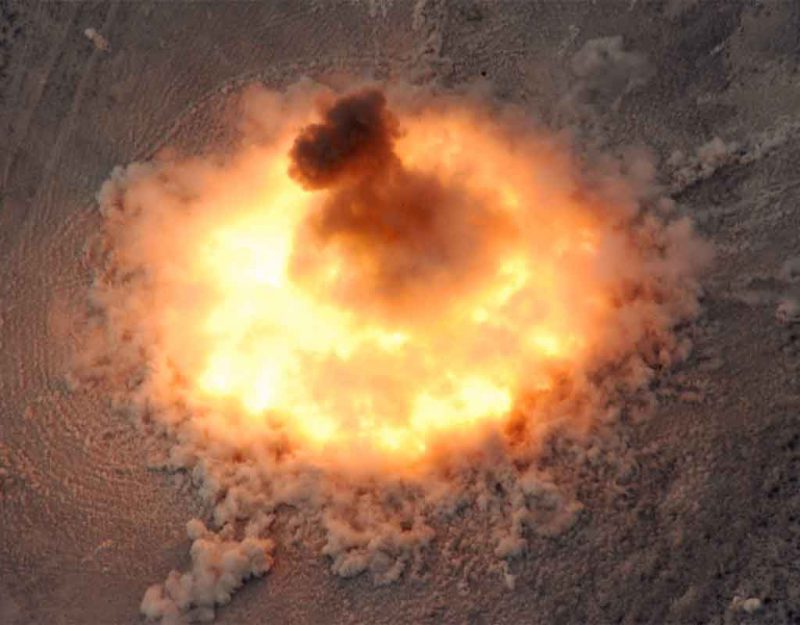 Most people have no idea that one of the most powerful explosives of the modern era is made from a common fertilizer. In fact, many types of nitric acid compound can be used to similar effect, including urea.

Ammonium Nitrate/Fuel Oil (ANFO) mixtures provide a stable and powerful explosive that you can easily make in your garage:

The most widely used dry blasting agent is a mixture of ammonium nitrate prills (porous grains) and fuel oil. The fuel oil is not precisely CH2, but this is sufficiently accurate to characterize the reaction. The right side of the equation contains only the desirable gases of detonation, although some CO and N02 are always formed. Weight proportions of ingredients for the equation are 94.5 percent ammonium nitrate and 5.5 percent fuel oil. In actual practice the proportions are 94 percent and 6 percent to assure an efficient chemical reaction of the nitrate.

For this purpose, about 1 gal of fuel oil for each 100 lb of ammonium nitrate will equal approximately 6 percent by weight of oil. The oil can be added after each bag or two of prills, and it will disperse relatively rapidly and uniformly. Inadequate priming imparts a low initial detonation velocity to a blasting agent, and the reaction may die out and cause a misfire. High explosive boosters are sometimes spaced along the borehole to as sure propagation throughout the column.

Fuel oil means Diesel Fuel, in our common parlance. The formula can be refined to be even more destructive:

Cook’s greatest commercial explosives invention was formulated in December of 1956, when he created a new blasting agent using an unusual mixture of ammonium nitrate, aluminum powder, and water. The safety and efficiency of this new explosive were apparent, and the use of water was revolutionary. Tests that followed resulted in the development of a new field of explosives: slurry explosives. This invention converted the commercial explosives industry from “dangerous dynamite” to “safe slurry” and dry blasting agents [ANFO]. In 1972 Cook developed the BLU-82, the largest and most powerful chemical bomb, using aluminized slurry.

It works well if used with a blasting charge of something more volatile:

Some use nitromethane or hydrazine instead of diesel fuel for further power, such as Tim McVeigh:

The salesman said the customer bought three 54-gallon barrels of nitromethane for $925 each on Oct. 21, 1994, at a drag-car racetrack in Ennis, Texas.

McVeigh, 29, and Nichols, 42, are accused of mixing fertilizer and racing fuel to make the bomb that destroyed the Alfred P. Murrah Federal Building in Oklahoma City in April 1995.

McVeigh detonated his bomb with Tovex and detcord, but any sudden sharp explosion will work, although for best results there should be multiple blasts within the ANFO in order to cause it all to go up at once. He added cylinders of acetylene to increase the blast force of the explosion.

ANFO requires intense heat (2000F+) and/or a blasting shockwave to detonate, which is why is it usually set off with more intense explosives. In OKC, McVeigh used 350 pounds of conventional explosive, including one based partially on ANFO, to detonate his truck bomb.

The shockwave or rapid heat is necessary to cause the rapid chemical reaction that results in an explosion:

The first thing that happens during a fertilizer bomb blast is the explosion of the detonator. It contains a small amount of an explosive compound in it, and when it discharges, it creates what experts call a detonation wave. This detonation wave radiates outward from the detonator at a speed of about 2 to 3 miles per second through the mixture of ammonium nitrate and fuel, Goodpaster said.

The energy of the detonation wave causes the ammonium nitrate in the fertilizer to vaporize – the solid fertilizer becomes a gas in an instant. The ammonium and nitrate molecules break down, and a large amount of oxygen gas is suddenly formed.

The gas released from the decomposing fertilizer is what drives the explosion. The rapid release of oxygen, along with the energy from the detonation wave, ignites the fuel. When the liquid fuel ignites, it rapidly combusts, and even more gas is released.

The best way to increase the energy of ANFO is through the addition of aluminum to ammonium nitrate resulting in higher energy output compared to just fuel oil.

Aluminum, when reacting in the detonation process, produces aluminum oxides. The reactions are exothermic and the energy output of the explosive is improved. The graph below shows the effect of aluminum in the energy of ANFO. It is obvious that energy can be increased. However the rate of increase falls-off beyond the 13%-15% Al point. This is probably the upper limit for economic reasons as well. Furthermore at higher percentages the energy output falls off. It should be noted here that solid Al2O3 results as a product of reaction. This has energy trapped in it. From blasting studies it is estimated that only 1/2 of the energy which is associated with the solids is available for useful work. A large percentage of aluminum desensitizes the product. 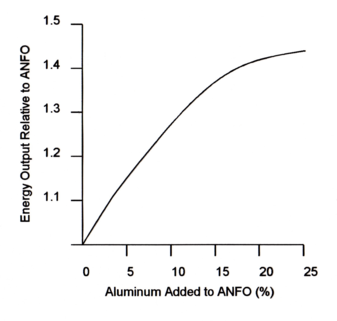 It helps to encase the explosive in a rigid container:

The critical diameter of the prilled product ( = 0.8 g/cc) is 7.5 cm when the product is unconfined. Confinement decreases the critical diameter to about 5 cm. The ideal detonation velocity of ANFO at a density of 0.85 g/cc is 5200 m/sec. From the above curve it follows that ANFO detonates non-ideally even at very large diameters. It has been found that the ideal detonation of ANFO can be achieved when using very strong confinement or using confinement and a very large diameter of charge (in the range of 44 cm).

Some use gelled nitromethane for a sharper blast:

A good, stable high explosive may be made by mixing twenty parts gelled nitromethane to eighty parts powdered ammonium nitrate. The nitromethane is gelled by the addition of 1 to 10 percent nitrocellulose, in the form of modified, single-base smokeless gunpowder. The smokeless powdeT is softened in a little acetone and spread out on a smooth surface to dry. It is then broken up into a granular powder. It will dissolve more readily in the NM in this form.

This explosive is an improvement over conventional NM/AN mixtures in that it is substantially nonvolatile, uses less nitromethane, and has a greatly extended shelf life. For example, the commercial NM/AN explosive called Kinestik uses 64 grams NM and 160 grams AN to make a half-pound “stick.” This mixture uses 179 grams AN and 45 grams NM to achieve the same level of power. It is roughly equal to TNT.

You may find additional materials of interest especially regarding the production of booster explosives which can be detonated with something as simple as a shotgun shell wired to a solar igniter.