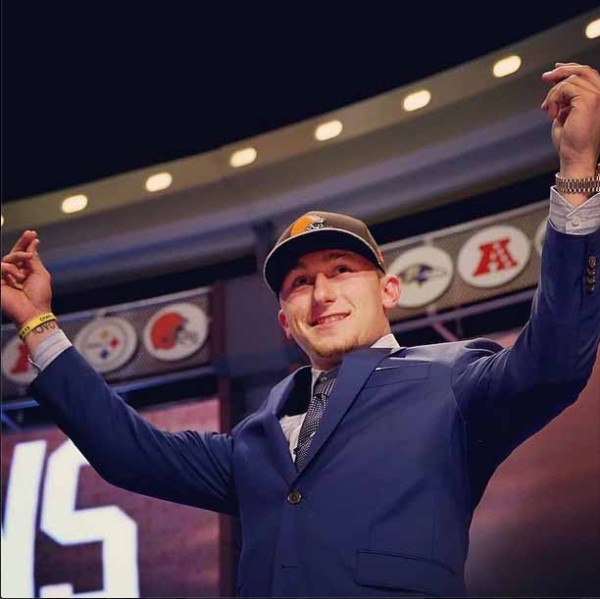 Does sport matter? Some say it doesnâ€™t, referring to it dismissively as â€œSportsball.â€ Others say it matters in a negative way. Itâ€™s a part of the Matrix. Paul Kersey (of SBPDL fame) referred to college football as â€œThe Opiate of America.â€ I tend to respectfully disagree with both of these points of view. I look at sport the way the Ancient Greeks looked at tragedy. The games provide catharsis and teach us lessons. They reveal truth within the crucible of competition. As Legendary UCLA Basketball Coach John Wooden put it: â€œCompetition doesnâ€™t build character. It reveals it.â€ We can see the character of who we are reflected in who gets to play our games on the biggest stages. Take the example of Amerikaâ€™s Quarterback, Johnny Manziel.

Amerika turns its children into the most special of special little snowflakes and in so doing, we make a tragic mistake in malfeasant parenting. Nobody ever told Johnny Manziel that he sucked at anything. Manziel was the son of a Texas football legend and predictably matured into an outstanding high school QB. The misplaced hero worship started right there. So special was the Great White Snowflake, that he earned an athletic scholarship to the prestigious and world-renowned Texas Art and Music University*.

It was in college where Manzielâ€™s specialness first turned into rot. He won many great games, went to many wild parties and developed a reputation for acting like quite the wild douche-nozzle. By the time Johnny Manziel graduated, he had a Heisman Trophy, a chemical dependency, and a reputation that scared off serious-minded NFL General Managers that strove to build workable teams in the quest for Super Bowl glory. Luckily for Johnny Football, the Cleveland Browns have an NFL franchise as well. This franchise accurately represented the brainpower and moral character of Cleveland, Ohio by selecting Manziel in the 1st Round.

It would have gone so much better for Special Little Johnny if he had been a back-up QB who spent a few years freezing his butt cheeks off on the sidelines at Michigan before getting a chance to start. Then he could spend the last Semester of his senior year, sobering up, passing a few classes and sprucing up his resume. Itâ€™s the whole process of not really knowing whether you are going to make it that helps develop the character that oh, winning a bunch of super bowls successfully revealed in Thomas E. Brady.

And what character traits make Johnny Manziel Amerikaâ€™s Quarterback? He quickly got into trouble in his first NFL training camp because he wasnâ€™t the man and couldnâ€™t handle being nothing special. His play was sporadic. His crazy life off the field prevented him from achieving success. He promptly finished his disastrous rookie year with a stint of rehab worthy of a Motley Crue Rhythm Guitarist. Like many special people, Manziel found rehab tiring. It drained his soul. He needed a vacation. So he decided to do something original like go to Vegas and drink.

As a result of reposing their trust, confidence, a nuclear kiloton of bank in Johnny Manziel, the Cleveland Browns got a 3-13 record, a fired Head Coach, a fired General Manager, and didnâ€™t even quite stink badly enough to get the number one pick in next yearâ€™s draft. The entire organization, not just Manziel, will be spending the offseason getting rehabbed. And that is both condign and fitting. When the entire outfit stinks like a butthole, you can pretty much expect them to hire and promote people who, to quote Thomas E. Brady, Defending Super Bowl Champion, are basically turds.

This is why Johnny Manziel is Americaâ€™s QB. He is overrated, spoiled, indulged, insulated from consequence and then put in a position he has been given no preparation to succeed in at all. And then we furrow our brows and wonder why he habitually craps on anyone who rewards him with good faith and trust. It almost reminds you of the guy we have in the White House. You could just about learn a lesson from the tragic and cathartic downfall of a guy like Johnny Speedball, oops I mean Football and not put a guy like that in charge of anything that really mattered. You could, of course, if you didnâ€™t just consider things like NFL Games, corporate hiring decisions, Presidential Elections et al., all just â€œSportsball.â€

We have no one to blame but ourselves | Female moderators