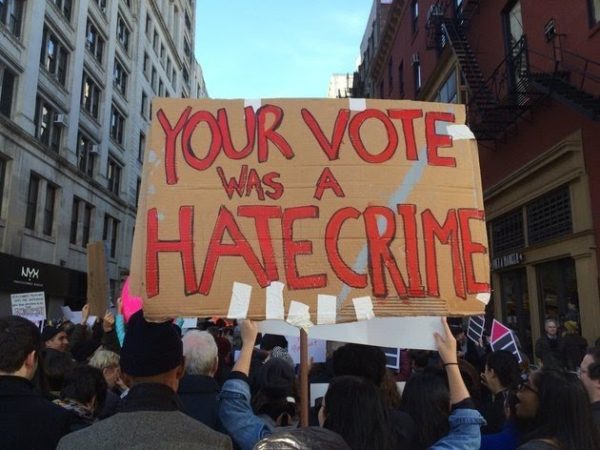 The fragmentation of the former United States of America happened this way: the coasts, appalled at the earthy dirt people rhetoric of the middle states, seceded in a mirror image of the Confederacy 150 years before.

As the wealthiest parts of the nation, at least on paper, they took all of the entertainment, finance, publishing and internet industries. This made them the odds-on winners from the beginning.

However, the dirt people had something else on their side: they were the remaining producers. As imports slowed because of the instability in China and rising oil costs caused by Paris convention rules that slowed international shipping, the city people found the dirt people were gaining a slow advantage.

This prompted quick conferences among the city people. “We need a pretext for war,” said President Joe Biden. “How do we make these people so mad they will attack us?” The group huddled and came up with an answer.

The next morning, press releases went out: a new restriction was placed on trade, such that any state which did not support the Rainbow Contract — no one could refuse gay people any service, pre-schools had to teach transgender education, and every corporation had to have the right mix of women and minorities on its board — would face an additional tariff.

In the cities, this was greeted with mass public celebrations. The dirt people were beaten! They would have to comply, if they wanted the lucrative city people trade. But then something entirely unexpected happened.

The dirt people shrugged. “We will make do with an economy of our own,” they said. Exports ceased.

In order to afford this, the dirt people shrugged off every government policy except defense. Roads were privatized to local communities, and highways became tollways. Public schools dissolved. Welfare and health care went away.

During those early days following the split, both dirt people and city people had essentially adopted copies of the previous government. Then, each added and subtracted rules. Now, the dirt people had stripped the government back to its 1780s version.

The city people were jubilant — at first. Prices in the stores kept creeping up. Their own agriculture could not handle the demands of their new population, many of whom were minorities, gays and Leftists relocated from dirt people lands.

Ripple effects were quickly felt. The internet industry depended on people able to buy products, but food was too expensive, so advertising collapsed. Then the government defaulted on its already-heavy debt.

Nothing was left except to invade.

Things went well for the dirt people at first. They were able to hold off the early invasions with their superior knowledge of marksmanship and military strategy. But over time, the invaders kept pouring in. The cities emptied their excess population, gave them cheap guns, and sent them to the front in vast waves.

Even worse, the independent states did not unify to form a fighting force. Texas, for instance, was not so concerned about what went on in Ohio, and vice-versa. This meant that the states began to fall like dominoes.

With the sacking and burning of Dallas in 2034, the war was considered to be over by most. The city people had won, just like they did in 1865. But another curious thing happened. The dirt people were nowhere to be found. Their armies just evaporated.

This meant that when city people drove to the countryside, they often vanished. The city people Reconstruction force which enforce rainbow rights in all the small towns found itself unable to contact its outposts. People just disappeared. Equipment blew up. Sniper rounds took the heads off visiting business dignitaries.

Now the city people faced their worst nightmare. They had won the war, but could not control the territory. Whenever a local area acted up, the city people could send in a large force to crush it, but the instant that force was gone, the acting up started again.

The city people deployed secret police, drones, spies and police. These seemed to succeed, but then found that the people they were hunting down had disappeared, re-appearing elsewhere under different names. Dirt people stopped using the internet and triplicate forms. Nothing was certain.

Even more, the secret police were not safe. A truckload of troops would head out to suppress a small rebellion and never make it. Bureaucrats and police alike were found floating down the Mississippi, with hands, heads, eyes and teeth removed. Communications were sabotaged.

What settled the war in the end was the collapse of the city people economy. They had too many welfare recipients and not enough customers, and they could not force the dirt people to buy their products. Unfunded, their military withered.

At this point, the dirt people emerged as the wealthiest part of the nation. With their knowledge of technology and manufacturing, they manufactured a fleet of drones which fired cluster munitions into heavily populated areas.

Twenty years later, the population crashed on the coasts, and the dirt people armies drove the remainder into the sea. What was left was a nation of maybe fifty million people, all competent, who were ruthlessly intolerant of anyone different.

The Union was whole again. Like Abraham Lincoln almost two centuries before, the dirt people had preserved the United States, but at a great cost. Future centuries would not care however as the new nation went on to greater heights than its old ruined shell, afflicted as if by a cancer with the delusional city person ideology.