Alt Right Does Not Mean “Nazi.” Time To Stop HitLARPing. 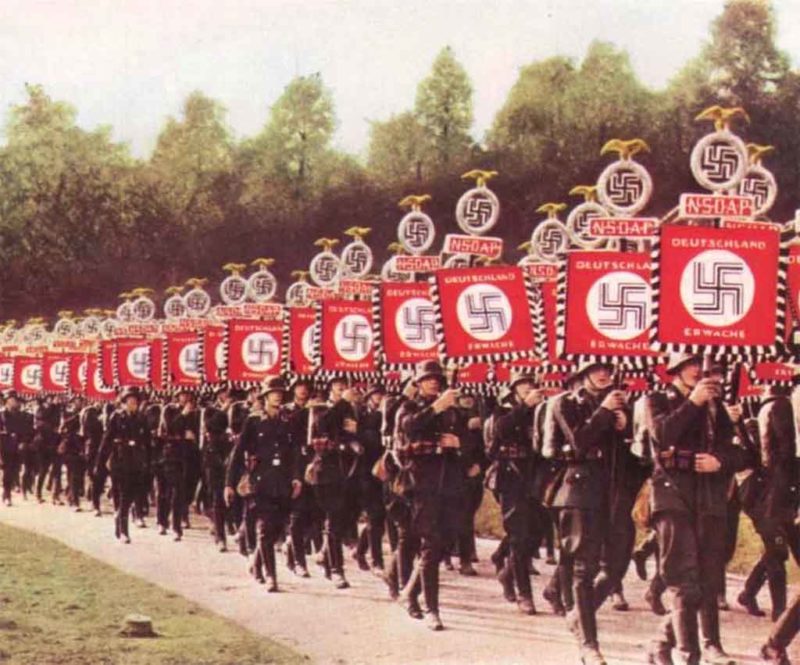 Modern society feels like the parade in the children’s The Emperor’s New Clothes:

So off went the Emperor in procession under his splendid canopy. Everyone in the streets and the windows said, “Oh, how fine are the Emperor’s new clothes! Don’t they fit him to perfection? And see his long train!” Nobody would confess that he couldn’t see anything, for that would prove him either unfit for his position, or a fool.

We all know, at a gut level, that this society is fundamentally evil because it is given over to mob rule and thus a lowest common denominator in all things, but no one wants to speak up and be thought… animalistic, cruel, elitist, unsociable, or otherwise undesirable.

So we all go along with it. We get up tired, commute through a wasteland to boring jobs, curse our failed marriages, pretend to like the moronic television, vote for the lesser of the evils presented, and generally act as if we were having a good time in this utilitarian nightmare, lest someone think we are losers.

And then along came the Alt Right:

“But he hasn’t got anything on,” a little child said.

“But he hasn’t got anything on!” the whole town cried out at last.

This has been our strength. We are more like literature or philosophy than politics; we pointed out that the clothes are not there, and have gestured at a greater world that we have lost and how to get there. It begins by noting that a civilization is its genetics, and that we need to preserve ourselves against the currents of mob rule and diversity.

However, with being that lone voice of a child comes a great desire, which is to take one single step that will smash down the evil and restore goodness. The more extreme, the better; we want to tolerate nothing but the good, and rip the rest out, and then be delivered from this deranged dystopia of the human ego unleashed.

For this reason, people turn fondly toward images of Adolf Hitler. History proved him right about diversity being our downfall, and he certainly had a handle on smashing down what clashed with his vision. Not to mention the cool uniforms, and the Nazis being the last time the world respected and feared Europeans.

Now we are like the anime versions of ourselves, cuddly and friendly in that same way that prey animals are, and stupidly oblivious to the resentment of the rest of the world who, being unable to achieve what we did, simply want to take what we have and replace us. Diversity creates hatred.

Hitler symbolizes total war and erasure of all that is wrong in the world, an intolerant and incessant Templar quest for purity, and making white people respected again. Without fear, or at least the potential for fear, there cannot be respect. Machiavelli was right in this regard.

I get it. If you grew up in this society and saw its horrors and how everyone stayed scrupulously in denial of them, you do not want just a reveal of the Emperor’s nakedness… you want a bloodbath, after which point everyone who participated in the lie is heaped in a mass grave along with their idiotic modern art and laws.

However, emotion is not reality. Nor is it a particularly good guide past the initial direction. It is healthy to see this world as a horror and to want to destroy it. In fact, anyone who lacks that outlook probably has mental health problems, even if most seem to lack it because they have been made dishonest by peer pressure.

Even more, there are some problems with Hitler: he was, ultimately, too modern. He wanted big government to nurture culture, but ended up replacing culture with a totalitarian regime. He wanted to end diversity, and ended up mass murdering a bunch of Jews. Then there was the instability, the lost war, the excesses of authority.

But going further, we cannot be Hitlerites for the same reason that we cannot be those people who long for the restoration of the 1980s. This is nostalgia, and it misses the fact that we need to move forward toward something better than anything in the modern era.

No doubt our task is made more difficult by the pathological tendency of the Left to call us Nazis. The red-blooded response is to say, “You want Nazism? I’ll show you total Nazism!” and start gassing journalists, minorities, Leftists of all varieties, and any degenerates you find.

However, what makes the Alt Right powerful as an infectious idea — a meme itself — is that it offers an alternative to things as they are. Leftism is insane, mainstream conservatism is neutered, industry and academia have gone crazy, and we want to escape this entire cycle and start with a new vision and new hope.

The Alt Right, if you read carefully of its statements, centers around a simple idea: restore Western Civilization. This requires admitting that we have not had Western Civilization for some time, only a zombie ersatz substitute, and that we need to change our thinking.

Modernity takes the form of a thought process at its very root. This mentality insists that we are all equal because we are individuals and each one of those wants to be a little King in charge of his or her own world. It results in mass manipulation, because with a mob of individualists, the only way to get anything done is a cult-like mass mobilization.

This view of life is entirely evil, and nothing can cleanse it, not even Hitler. On the way we will end up doing un-Aryan (“noble,” “twice-born”) things, horrible things like the Holocaust or even the killing of the White Rose society. That is not who we are. We are those who create great things.

In the process, we must push aside others. There is nothing wrong with saying that Western Civilization belongs to genetically Western European people, and everyone else — every last one — must Go Back Home. If we are as intelligent as we think we are, we can do this peacefully and graciously.

When we fixate on Hitler, however, we have chosen a substitute for the goal of restoring Western Civilization. We are restoring the Nazis, flaws and mistakes and all. Even more, we are trying to do so when our situation has vastly changed, in a way that may escape our control when people chase the symbol instead of the goal.

Modernity began with the Renaissance when it was decided that “man is the measure of all things,” forgetting that we need a commons comprised of social order, culture, customs, values, faith, and lore… the elements of civilization itself.

Unless we reverse that thinking, we will never get anywhere but a repeat of the last centuries, growing weaker each time we kill our brothers and sisters in pointless warfare like the two moronic world wars. It was moronic for America to participate, but the genesis of these wars was idiotic as well.

The Alt Right exists to restore Western Civilization. This requires that we do away with that Renaissance thinking and its modern form, Leftism. Leftism is a spectrum from libertarianism through Communism. The different types are distinct only by degree, because they agree on the same idea: equality. Remove equality, then individualism will naturally fall, and we can bring back quality.

Leftists generally come from the category of unhappy neurotics who are self-destructive like most people, but clever enough to rationalize that self-destruction as “progress.” This thinking has its root in their unhappiness.

Unhappy people have no faith in the world to be good. They suspect that its end results are like its methods or mechanisms, which can be brutal and ugly. They forget that natural selection brings us both hawks and hummingbirds, so tends toward beauty, not ugliness.

Hitler ultimately embraced too much of the ugliness, resentment, hatred, darkness, rage, and sense of futility. His ideas were good at the start, but became twisted by his outlook, which at the end was without hope and self-destructive like that of the Leftists.

People without faith in the goodness of life focus on their own reactions to the world instead of the world that they are reacting to. They are more aware of their emotions, judgments, and feelings — which correlate to methods — than they are to the goodness hiding in every corner of life, which correlates to our goal or purpose.

Again we must turn to Fred Nietzsche for an insight into our sickness:

This modernity was our sickness: lazy peace, cowardly compromise, the whole virtuous uncleanliness of the modern Yes and No. â€¦ Rather live in the ice than among modern virtues and other south winds! We were intrepid enough, we spared neither ourselves nor others; but for a long time we did not know where to turn with our intrepidity. We became gloomy, we were called fatalists. Our fatumâ€”abundance, tension, the damming of strength. We thirsted for lightning and deeds and were most remote from the happiness of the weakling, ‘resignation.’ In our atmosphere was a thunderstorm; the nature we are became darkâ€”for we saw no way. Formula for our happiness: a Yes, a No, a straight line, a goal.

People who lose faith in the goodness of the world retreat into themselves. They focus on their reactions, which become substitutes for goals. They rationalize failure as good, and find scapegoats to blame for the ineffectual nature of steering themselves by reaction. They become twisted as a result.

We do not want to go down that path. The Alt Right offers our first new opportunity in at least a thousand years: a concept of dedicating ourselves to building civilization by accepting both radical realism and the need for a transcendent vision, or a chance to use creativity to build instead of destroying.

It makes no sense to let the Left define us. We are not Hitler, nor could we be him. We do not want to relive the past. For the first time in a long time, we want to live for the future through our sense of purpose, and that requires that we stare into the abyss, say “no” quietly, and turn toward creation.

Leftism Ends As People Realize It Is A Greater Threat Than The Right | Will Brazil Set A Precedent In Quitting Liberal Democracy?