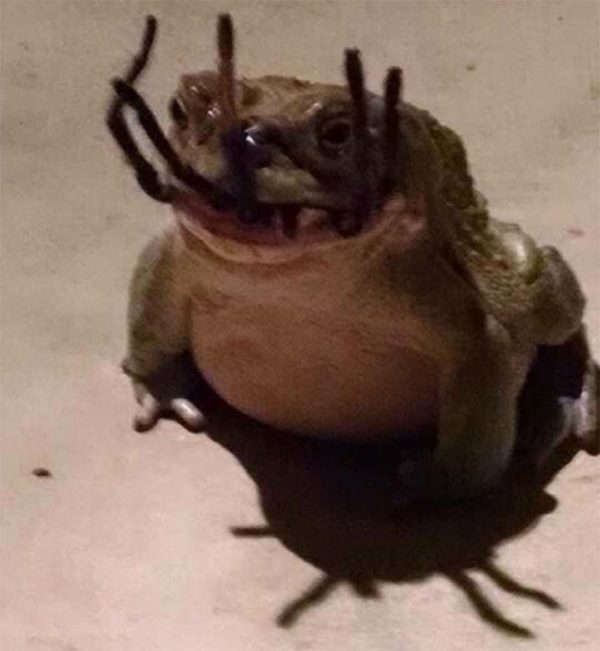 President Trump used the phrase Alt-Left to refer to the counter-demonstrators in Charlottesville who opposed the Alt Right demonstrators there. This was more than symmetry: he used the term to identify these people as extremists who have risen to oppose the Alt Right, and to tar them with the same brush of “terrorism” that the Left is using against the Right.

Unfortunately, this statement also opened up ambiguity and gave this new group an identity. The press can now wonder aloud who the Alt-Left are, and explore “investigative journalism” that consists of interviewing their contacts on Twitter, Reddit and Facebook. There will be much effort expended in trying to portray the Alt-Left as a new idea.

In reality, we all know who the Alt-Left are: the same group of Communists, Anarchists and criminals who make up Antifa and anti-G20 protest groups, funded by NGOs and wealthy benefactors, and bused in whenever there is chaos with the intent of creating a riot so that middle America cowers and gives them whatever it is they want this time.

Looking slightly deeper, we can see that these different groups agree on one essential thing, namely the forced creation of equality through the redistribution of wealth. Whether they call themselves Anarchists or Greens, they are all essentially Communists, and none of them deny this. Antifa, after all, was always a Communist group sponsored by international Communist organizations. 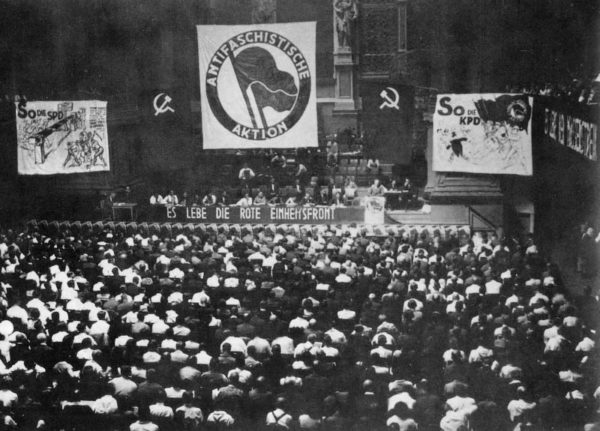 Above: Antifa conference in Germany in 1932, sponsored by the Communist party.

Maybe we can dig deeper. Those who join Leftist movements are of several types, with most following along for social reasons like being with their friends, and a few true believers who are the ones who instigate violence as happened in Charlottesville.

The psychology of these people reveals an underlying emptiness filled only with an impulse to destroy, which is why they wage war on civilization through class revolt. For whatever reason, they cannot have power and importance in the world by doing productive things, so they focus on making themselves important by being destructive, which makes them feel powerful, a clear sign of low self-esteem.

Their hunger for power manifests in a type of acquired sociopathy that expresses itself in a desire to dominate others:

Yet, leaders can delude themselves that they are working for the greater good (using socialized power), but engage in behavior that is morally wrong. A sense of power can cause a leader to engage in what leadership ethicist, Terry Price, calls “exception making” – believing that the rules that govern what is right and what is wrong does not apply to the powerful leader “for other people, this would be wrong, but because I have the best interests of my followers at heart, it’s ok for me to….” During Watergate, the argument was made that President Nixon could not have acted illegally because “the President is above the law.”

Leaders can also become “intoxicated” by power – engaging in wrong behavior simply because they can and they can get away with it (and followers are willing to collude and make such exceptions “It’s ok because he/she is the leader”). Some have suggested that President Clinton’s engaged in a sexual dalliance with intern Monica Lewinsky simply because “he could.”

…On the negative side, the more people possess power, the more they focus on their own egocentric desires and the less able they are to see others’ perspectives.

In other words, low self-esteem people when given power use it to fill the void of lacking self-esteem, and as a result, become abusive mainly because they were never competent to have power in the first place, but built up their self-image with the idea that they deserved it. This is the long-term mental health fallout from assuming “equality” as a value in our society.

Drilling down deeper, we can see a psychological pattern to people like this. They want to be powerful but are not, so instead they subvert and undermine, and this forces them to justify their actions as “good” in order to maintain their self-image as a positive person. They adopted that self-image to compensate for their lack of actual achievement or goodness.

All Leftists fit within this psychology, and it places them on a power spectrum, which tells us that all Leftism is the same, differing only in degree. A mild-mannered democrat, when given power, becomes a socialist; when given unchecked power, this same person might well become a mafioso, gang leader or Communist because all three grant them the indulgence to act out their power in sociopathic ways.

Through this we see that the Alt-Left is the same group that has always provided people to destructive movements, whether cults like Jim Jones, Communist leaders like Che Guevara, or organized crime kingpins like Hillary Clinton or Jimmy Hoffa. They are what Fred Nietzsche calls Tarantulas:

Lo, this is the tarantula’s den! Would’st thou see the tarantula itself? Here hangeth its web: touch this, so that it may tremble.

There cometh the tarantula willingly: Welcome, tarantula! Black on thy back is thy triangle and symbol; and I know also what is in thy soul.

Revenge is in thy soul: wherever thou bitest, there ariseth black scab; with revenge, thy poison maketh the soul giddy!

Thus do I speak unto you in parable, ye who make the soul giddy, ye preachers of equality! Tarantulas are ye unto me, and secretly revengeful ones!

But I will soon bring your hiding-places to the light: therefore do I laugh in your face my laughter of the height.

Therefore do I tear at your web, that your rage may lure you out of your den of lies, and that your revenge may leap forth from behind your word “justice.”

Because, for man to be redeemed from revengeâ€”that is for me the bridge to the highest hope, and a rainbow after long storms.

Otherwise, however, would the tarantulas have it. “Let it be very justice for the world to become full of the storms of our vengeance”â€”thus do they talk to one another.

“Vengeance will we use, and insult, against all who are not like us”â€”thus do the tarantula-hearts pledge themselves.

“And ‘Will to Equality’â€”that itself shall henceforth be the name of virtue; and against all that hath power will we raise an outcry!”

Ye preachers of equality, the tyrant-frenzy of impotence crieth thus in you for “equality”: your most secret tyrant-longings disguise themselves thus in virtue-words!

Fretted conceit and suppressed envyâ€”perhaps your fathers’ conceit and envy: in you break they forth as flame and frenzy of vengeance.

At some basic level, these people are motivated by a desire to take revenge upon the world. It created them, in their view, and then gave them nothing which matches what they think they should be, which is kings or at least powerful, despite not having the ability to be those things. This is the mentality of caste revolt, and the Alt-Left is just its latest incarnation.

People motivated by revenge are — like suicide bombers or career criminals — often willing to sacrifice themselves in order to destroy others who they perceive to be unjustly above them. Their response to power is not to resist it, or find a legitimate means of gaining it, but to sabotage it and then seize the moment in flourishes of anarchic destruction that basically hold normal citizens hostage.

Alt-Left members will demonstrate a psychology common to all Leftists based in low self-esteem and revenge:

10. By “feelings of inferiority” we mean not only inferiority feelings in the strict sense but a whole spectrum of related traits; low self-esteem, feelings of powerlessness, depressive tendencies, defeatism, guilt, self-hatred, etc. We argue that modern leftists tend to have some such feelings (possibly more or less repressed) and that these feelings are decisive in determining the direction of modern leftism.

…13. Many leftists have an intense identification with the problems of groups that have an image of being weak (women), defeated (American Indians), repellent (homosexuals) or otherwise inferior. The leftists themselves feel that these groups are inferior. They would never admit to themselves that they have such feelings, but it is precisely because they do see these groups as inferior that they identify with their problems. (We do not mean to suggest that women, Indians, etc. ARE inferior; we are only making a point about leftist psychology.)

…15. Leftists tend to hate anything that has an image of being strong, good and successful. They hate America, they hate Western civilization, they hate white males, they hate rationality. The reasons that leftists give for hating the West, etc. clearly do not correspond with their real motives. They SAY they hate the West because it is warlike, imperialistic, sexist, ethnocentric and so forth, but where these same faults appear in socialist countries or in primitive cultures, the leftist finds excuses for them, or at best he GRUDGINGLY admits that they exist; whereas he ENTHUSIASTICALLY points out (and often greatly exaggerates) these faults where they appear in Western civilization. Thus it is clear that these faults are not the leftist’s real motive for hating America and the West. He hates America and the West because they are strong and successful.

In other words, all of their causes are pretexts and excuses, and their actual cause is hatred of health, prosperity, strength, intelligence, beauty and moral goodness. They feel that if they destroy these things, their own lack of them will not be noticed, and so they will finally escape the “oppression” of being lesser.

They could easily escape that oppression by engaging in the time-honored practices of introspection, meditation and self-discipline, but the need to do those things insults their artificially-created personality construct which holds that they are not losers, but in fact winners, much as in Leftism, winning is losing and losing is winning.

Luckily, the Alt-Left is a perfect foil for the Alt Right, because everything we have said about Leftists (mental health disorder, grifters, parasites, civilization destroyers) comes true in Antifa and the Alt-Left, as even curmudgeonly Leftist Noam Chomsky observed:

“It’s a major gift to the Right, including the militant Right, who are exuberant.”

…Chomsky said, “what they do is often wrong in principle â€“ like blocking talks â€“ and [the movement] is generally self-destructive.”

“When confrontation shifts to the arena of violence, it’s the toughest and most brutal who win â€“ and we know who that is,” said Chomsky, a professor emeritus of linguistics at the Massachusetts Institute of Technology. “That’s quite apart from the opportunity costs â€“ the loss of the opportunity for education, organizing, and serious and constructive activism.”

In the coming weeks, Leftists will be divided on the Alt-Left. All will support it in private because there is no difference from its ideology and their own, and emboldened by Civil Rights, the Left has become a party exclusively dedicated to its own victimhood and therefore a need for revenge. In public, some will shy away from what looks increasingly like a terrorist or organized crime group.

As George Smiley reminds us in Tinker, Tailor, Soldier, Spy, we know they can be beaten because they are fanatics, and every fanatic harbors a secret doubt. In the case of the Alt-Left, they secretly suspect that the actual reasons for their life-failure are their own inadequacies and lack of bravery in areas where they could make a positive difference. This makes them unstable.

To counter them, then, the only solution is to be braver than they are: to discuss any issue, to be clear on what we believe and why it is logically correct, and to constantly and brutally point out their personal shortcomings and their motivations. These are fragile people underneath the bluster, and they can be defeated.