All Leftist Movements Are ISIS in The End 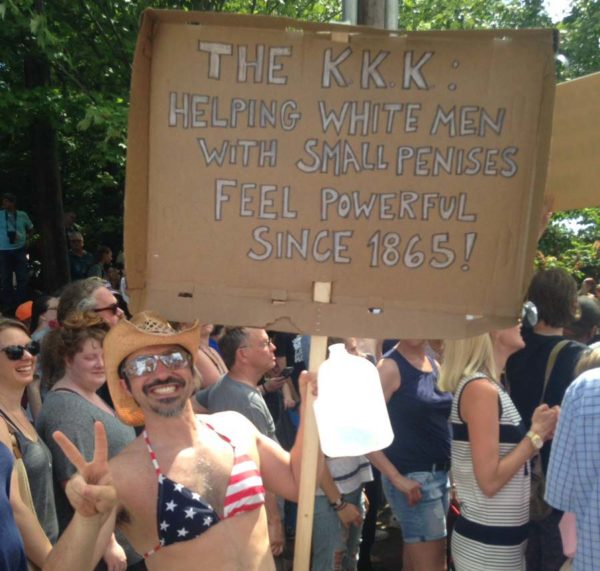 If you never managed to understand much of history, we have a solution for that. You can just tear down all the monuments and pretend that history exist. You will then avoid any confrontation with facts or logical truths that contradict what you want to believe is true, or even have used as the foundation for your personality construct.

This has great historical precedent on the Left, who specialized in editing history and replacing it with propaganda. If you lead a political movement that offers no ability to build anything other than a mound of the enemy’s skulls, you better tear down the cathedrals, museums and statues erected by your more civilized betters. Books that are thousands of years old and that form a canon of accumulated cultural wisdom? Bring on the kerosene and cigarette lighters.

Your success consists in denying your enemies a platform. If you can’t build it, maintain it or even understand the ruins you see decaying around you, remove it from sight before it becomes too great a reminder of your own impotence and a catalyst of shame.

Illegally pulling down statues of Confederate soldiers and taking videos of â€œbraveâ€ unemployed liberal arts major social justice warriors kicking the Confederate soldier is what passes for activism in todayâ€™s warped society. Liberal mayors and city councils across the south are falling all over themselves wasting time and taxpayer money to remove statues of Confederate generals to appease the left and make a display of how anti-racist they can be. Meanwhile, their cities are bankrupt, their infrastructure is decaying, black crime is rampant and their education systems matriculate functionally illiterate deranged snowflakes into society.

The destruction of monuments is both a form of distraction and a rejection. It is a distraction from the failure of Leftism to lead anywhere other than death. It is also a rejection of the superiority of what came before the Leftists. The contemporary Amerikan is not a capable, progressive (in the honorable, older definition of the term), inventive, strong or useful human being. We are a failed country that doesn’t want to face what we once could accomplish in the harsh, glaring light of a hungover, unemployed morning.

But you can’t make a statue of obese, blue-haired people failing to make any connections to anything larger than their beautiful Rubenesque selves. So in the dark of night, like the thieving cowards that perhaps many contemporary Amerikans truly are, they creep into the parks and remove the monuments to a local junkheap. The cowards who claim to govern Baltimore continue to destroy all value bequeathed to them by the culture and society that built the city.

Private contractors, city officials and a few onlookers were on the site of the Lee-Jackson monument as it was being taken down overnight into early Wednesday. The preparation began around midnight and by 3:00 a.m. FOX45 crews confirmed that at least two of the four monuments had been removed. After more than a century, the Roger Taney statue in Mount Vernon was removed, the base is all that remains.

Crews on at the site of the Stonewall Jackson and Robert E. Lee Monument in Wyman Park say, Mayor Catherine Pugh looked on as the monument was lifted from its base.

But where does it all end? whinges a cuck over at National Review. It will end with his finely-coiffed head on some primitive SJW savage’s totem pole. In an almost ironic paragraph of coruscating self-unawareness, his article explains why.

Two miles from our offices at National Review, there is an 18-foot statue of Vladimir Lenin. (The real-estate website Curbed calls it â€œquirky.â€ It was commissioned by the Soviet Union and discovered in a junkyard in Moscow.) You will not doubt my sincerity when I say everyone at NR despises Lenin and everything he stands for. So will Kevin Williamson be putting on a balaclava and leading a band of self-appointed historical-correctness commissioners down to 178 Norfolk Street on a commando raid to pull it down? No.

The wimps at NRO have no will to resist Leftist culture. The Leftists have the intent, the will, and the hatred to utterly smash your face for what they view as the hideous crime of ever existing. This is why anyone who follows mainstream Right will find themselves in the gulag or facing a guillotine. A nation defended by irresolute cowards will be nuked and burned from the pages of history. Their families will be raped and enslaved by BLM and Antifa.

The Alt-Left has no problem with ISIS because this is ultimately what they are striving to emulate and become. ISIS, the destroyer of culture, decency and civility resembles what all major Leftist causes degenerate into by the end. This is why Socialism always leads to death. This is why anyone who wants to reason together with the Deray McKessons of the world will end up dying unmourned and unlamented as the barbaric and gibbering Leftist pseudo-sapiens idly desecrate his smoldering and mutilated mortal remains.

How You Know You Are Living in a Soft Totalitarian State | Author Interview with David J. Wing