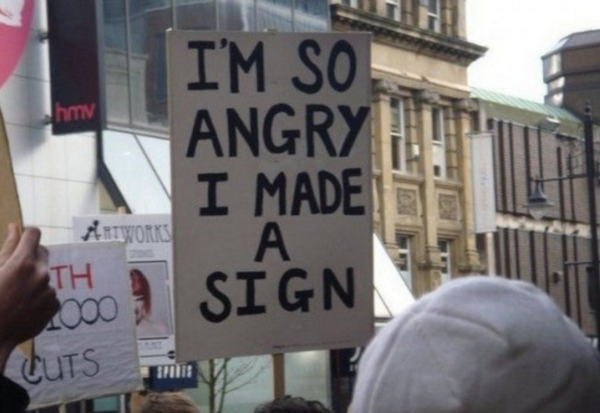 What does â€œfree speechâ€ mean? Â Like any â€œhuman right,â€ it is only vaguely defined: people should be allowed to say whatever they want, and should not be prevented from doing so. Â

The definition immediately raises questions. Â What about screaming â€œfireâ€ in a crowded theater? Â That has obvious immediate harmful effects, and so everyone is comfortable marring the clean absolute freedom with caveats to the effect that it only applies in reasonable situations. Â A crack in the clarity of the freedom appears, and soon a gang of subsequent exceptions crowd in, widening the rend until the whole thing collapses and leaves behind a garish rubble heap of political correctness and hate speech. Â

Now the new and improved definition of free speech goes as follows: people should be allowed to say whatever conforms to the prevailing narratives, and the government shouldnâ€™t stop them in an obvious way, unless itâ€™s hate speech, and in that case they should go to jail.â€

This colossal failure gives us a chance to reassess.

What we want is an absence of restrictions while pursuing and creating truth, virtue, and beauty.

Free speech is an absence of restrictions for anyone while pursuing anything.

When stated this way, the indiscriminate egalitarian nature of free speech becomes obvious. Â Egalitarianism is so deeply ingrained and reinforced at nearly every moment in the modern environment that it takes us deliberate effort to even recognize its presence. Â Since it is inherently false–humans are not equal; equality is a concept outside of the natural world and only makes sense in a purely abstract setting like mathematics–its presence will always confuse, misdirect, and corrupt.

In this case, defending the right of anyone to say anything is not the best path towards truth, virtue, and goodness. Â At best, itâ€™s an awkward, flawed method of sneaking in true, good, and beautiful speech along with a torrent of what is effectively noise. Â Itâ€™s an inherently egalitarian strategy for overcoming or holding back the more obviously destructive excesses of egalitarianism, and so ensures its own failure by having a foundation upon the force that it is meant to oppose.

Letâ€™s cut to the point. Â The best path towards truth, virtue, and goodness is simply to uphold those directly. Â Since these are not recognizable to all, and some can recognize them better than others, this requires hierarchy. Â In the egalitarian mindset, this is seen as unfair, because some are treated differently than others, but once human differences are taken into account and egalitarianism is rejected, it becomes clear that in fact the only way to be fair is to treat some differently than others in accordance with their differing natures.

When â€œspeechâ€ is not treated as a singular, indivisible abstract concept we become able to separate signal from noise because different subsets of society will have different criteria for what is considered noise. Â Some will hear a Bach fugue as a meaningless jumble of frantic notes and others will hear a pop song with as much interest as a washing machine, but this only becomes a problem when thereâ€™s only one radio station.

Similarly, when the task of governing is justly assigned to those who are most suited to perform the task well, whose traits include a greater ability to recognize truth, there is less noise amongst the group than there would be if it included everyone, some of whom are less able to recognize truth. Â And when this latter group is not burdened unjustly with reigns of power it is not suited to hold, there is less cause for concern when it produces speech that strays from truth. Â Overall, as a side-effect, this allows for greater freedom of speech for all because there is less need to police speech.

Under current conditions, free speech is often a useful tool that can overcome restrictions against true speech, virtuous speech, and beautiful speech. Â Let us not mistake the method for the ultimate goal.

You May Be A Leftist And Not Know It | Nationalists Defeat Antifa In Harrison, Arkansas