A Totem Pole for Our Time 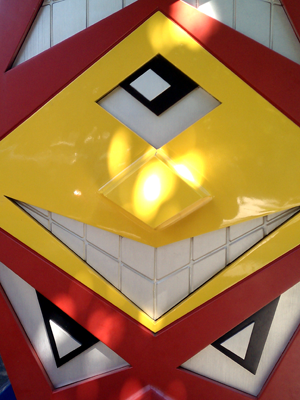 Many humans have traced their lineages to animals or mythological creatures, and it was these sacred totemsâ€”ancestorsâ€”who were depicted on totem poles throughout the Pacific Northwest. Similar practices have been documented around the world. Polynesians carved wooden tikis to represent their ancestors and beliefs about their origins, which connected and unified them as a people.

Portlandâ€™s Pearl District is a former industrial area that has been redeveloped as an upscale neighborhood. Where men labored in the steam of industrial shops, making and moving things, young urban professionals with soft, uncalloused hands now stroll from condo to boutique, picking out trinkets and jackets between appointments with their personal trainers and reservations at trendy restaurants.

A streetcar runs by Jamison Square in the Pearl, where yuppie parents bring their spoiled token children to play in the fountains. On the east side of Jamison Square there are four pieces of public art that look like cartoon totem poles. These 30-foot tall sculptures are officially called the â€œTikitotmoniki,â€ and like most contemporary public artworks in Portland, they seem harmless enough.

The Tikitotmoniki are recolored replicas of a sculpture by Brooklyn pop artist Kenny Scharf, titled â€œEndless Tiki.â€ The sculptures were brought to the Pearl District by Portland native Paige Powell, a former editor of Andy Warholâ€™s Interview Magazine, during her tenure as the director of a privately-funded arts organization she created (now defunct) known as the Pearl Arts Foundation. 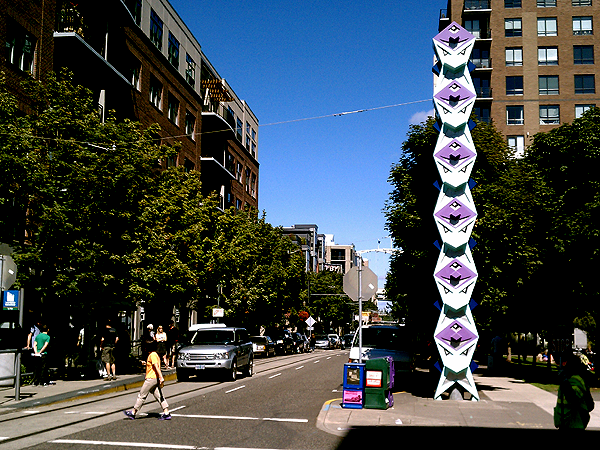 The Tikitotmoniki were not requested by the people of Portland; they were installed at the whim of elites. The Tikitotmoniki were not hand carved by a Portland artist; they were manufactured by contractors working for an artist who lived 2,900 miles away in Brooklyn, New York. These totems are imported products, like expensive European handbags, meant to increase the status of a refurbished industrial zone by tarting it up with symbols of high culture from somewhere else. Â Like all pop art, they celebrate the soulless product and make the artist and his handlers money while exploiting the cultural cachet of â€œart.â€

My palÂ Trevor Blake recently completed a project he has been working on for three years. Trevor has walked the city streets and compiled a detailed list of publicly viewable memorials in downtown Portland. He cataloged hundreds if not thousands of plaques and sculptures. Many of the memorials are dedicated to men who died in battle while fighting for their people, or men and women who made some sort of sacrifice to aid or enhance their community.

This is old Portland, old America, Traditional civilization. These memorials are truer totems, produced groups of people with a shared identity and a real connection to each other. These are the kinds of monuments created by people who want to remember their shared past, their kinship, their triumphs and defeats and experiences and unifying beliefs. These monuments are made by the people, for the people, because they mean something to the people.

Perhaps Scharfâ€™s Tikitotmoniki are the only appropriate totem poles for our New World. The Tikitotmoniki are cute, rootless and meaningless status symbols chosen by elites who â€œknow best,â€ to celebrate the culture of the dazed globe-trotting consumer.

Like most contemporary public artworks, they seem harmless enough.

When I first saw the Tikitotmoniki, I only noticed the bright colors and smiling faces. To passersby the Tikitotmoniki read as â€œfunâ€ sculptures. But like every overly-friendly salesperson or carefully scripted customer service representative, there is an angry, malevolent face under every forced grin. Â These happy people are not really your friends. 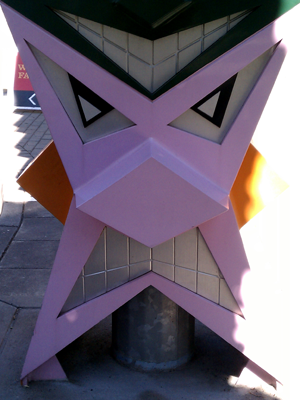 The Tikitotmoniki is the perfect totem for the age of the â€œfrenemy.â€