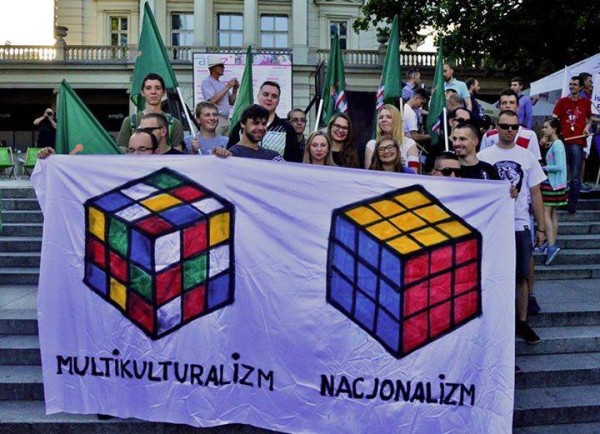 We filter people every day by what they speak and do. It seems unfair, except that it is necessary self-preservation: stay away from the crazy or foolish, and pursue those who have something to offer. This is one reason for the constant chatter of humanity.

These filters are powerful. People emulate successful people. If they see them using filters, they will imitate those. Filters are through this mechanism one way that culture commands society, doing a better job than control, government or media.

With recent events making things as clear as possible, it is time to upgrade our filters. I suggest a new Rubicon for separating the healthy people from the fools, insane and pathological leftist types. It consists of a single question and topic, and reveals whether someone is a media zombie or still capable of independent thought:

There will be two possible answers here:

To be in the running to be in my tribe, people have to answer with the first option. Diversity does not work because it requires more than one culture to occupy a space, which creates perpetual ethnic conflict. That conflict is always blamed on the majority, which advances the agenda of those who wish to seize control from that majority. The minorities are used and then discarded as needed.

There are other reasons why diversity fails as well. The biggest is that we cannot have social standards when we do not have a single group; instead what we have are anti-standards, where we try to accept, tolerate and encourage a wide variety of behavior. This makes everything less efficient. Also, as Robert Putnam’s study illustrated, with diversity comes distrust because there is no longer a common values system upon which people base their behavior, which makes the world a cryptic and threatening place.

In fact, none of the supposed strengths of diversity are in fact strengths. They are obligations, which allow the witless among us to show off how enlightened and compassionate they are, but as with all obligations, they subtract time, energy, money and goodwill from other activities. What we sacrifice to maintain diversity is the energy we needed to keep our society improving.

And none of this is mystifying at all. There is one and only one reason to support diversity: to get in the good graces of the herd, which insists you believe all sorts of nonsense so it can tell the difference between the good sheep it controls and the dangerous outsiders. All these people are doing is following the herd, hoping it will reward them for being so obedient.

While I have no problem with the fact that most of our species is limited by native intelligence, which appears in a Bell Curve with most people in the middle where they are just below the minimum limit to understand just about anything in politics, it is useful to separate the zombies from the survivors. The zombies will continue the march into the abyss and then wail about how it is someone else’s fault as they fall over.

Survivors have already detached from the herd dogma and are critical of things like democracy, pluralism and diversity because they can see that these ideas contain logical contradictions or paradoxes and therefore will never work. That means these ideas are con jobs, excuses and justifications not goals, and a flashy appearance with no substance. Why would anyone run a con job? To steal money or power, or simply to subjugate. That is why smart people avoid these ideas.

It’s a good and useful thing to separate from the herd. Among other things, you do not want to be dependent on zombies when something goes wrong, or have them near you, as they will drag you down. In addition, removing zombies from your life reduces your exposure to insane lies accepted as normal truths, and you can enjoy freedom from the mental spam that our society generates in lieu of anything useful.

#BlackLivesMatter has a point: Chicago deserves to burn | Stevens4Prez 2016: How I’d save the middle class