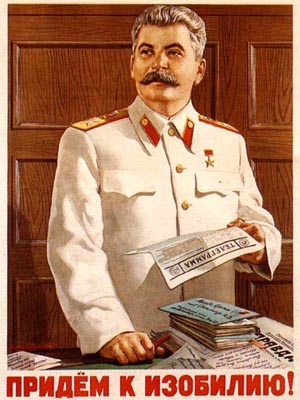 When empires are strong, they are carried by their deeds: their productivity, the clear wisdom of their mandate, and their great works.

However, when they start to die, they instead turn to control. If they have no deeds, they can instead control your thought by forcing you to repeat insane dogma until your brain accepts it as true.

No one minds a fascist or totalitarian empire when it is succeeding; when it starts to fail, multitudes rush to bad-mouth it, so they can get the social points for having spotted the weakest animal in the herd, first.

In those dying days, however, even non-totalitarian empires become “post-totalitarian,” which is the state when the population enforces obedience on each other.

They do it, of course, for gain: in a dying society, the best way to rise is to join the club. Repeat the dogma. Then help each other out. You rise, even if what you’ve gained is ultimately moribund.

When we use the term “Soviet” on this blog to describe this state, we’re referring to a civilization out of control. It is in denial of reality. It is covering that fact with dogma. If you publicly disagree, you may find yourself ostracized or worse.

Like all dying civilizations, ours has established such a political conformity. Since 1789, European-descended peoples have been moving further into liberalism.

Liberalism demands that everyone is equal and enforcement of that should be the highest goal of a society. There’s a direct relationship between our society falling apart and our adoption of liberalism.

This political conformity is the same mentality that afflicts all dying empires. Late empire Rome, the last two decades of the Soviet Union, ancient Greece after populist democracy: all fit the same pattern.

Our permanent obsession in this climate of political conformity is demanding equality by punishing the capable so we can transfer wealth and power to those who are at best “equal,” but more likely, not as intelligent, productive or morally upright as our successful.

Equality demands we give up ideas like monarchy (a hereditary line of leaders), social caste (hereditary roles by ability), and most of all, nationalism, or the idea that an population can define itself by heritage. Heritage, culture, language, customs, values and identity are inextricably linked.

You can see the jihad of our permanent obsession every day — and directed against all groups, not just European-descended ones:

A federal order for one of the nation’s largest American Indian tribes to restore voting rights and benefits to about 2,800 descendants of members’ former slaves threw plans for a special election for a new chief into turmoil Tuesday.

The federal government sent the sternly-worded letter to the Cherokee Nation after it sent letters last week kicking the descendants out of the tribe and stripping them of benefits including medical care, food stipends and assistance for low-income homeowners. – AP

You can see that while this is not genocide, the end result of it is genocide: destruction of the Cherokee by forcing them to outbreed, thus leaving no pure Cherokees intact. With outbreeding, culture falls apart, and with it customs, values, language and identity.

The Cherokee wanted to resist this. Their suggestion was simple:

The African Americans lost their citizenship last month when the Cherokee Supreme Court voted to support the right of tribal members to change the tribe’s constitution on citizenship matters.

The change meant that Cherokee Freedmen who could not prove they have a Cherokee blood relation were no longer citizens, making them ineligible to vote in tribal elections or receive benefits. – MSNBC

In other words, the Cherokee wanted to stay Cherokee.

In the interests of fighting racism, the federal government wishes to destroy the Cherokee.

Paradox? Yes. But equality knows no bounds — and liberal entities like our federal government, who gain their power from pandering to how people want to see themselves as altruistic and equal, will not be satisfied until every population on earth is mixed.

This conveniently destroys any values except those preached by government, advertised through commerce, propagandized through Hollywood “entertainment” and the neurotic news media, or dictated by social fashion. In short, it is a war against the idea of culture itself.

All Western governments are this way because with the French Revolution in 1789, they all started going liberal — in the hopes of avoiding revolutions and the bloodbaths that follow.

More than 20,000 pupils aged 11 or younger were last year put on record for so-called hate crimes such as using the word â€˜gaylordâ€™.

Some of them are even from nursery schools where children are no older than three.

One youngster was accused of being racist for calling a boy â€˜broccoli headâ€™ and another was said to be homophobic for telling a teacher â€˜this work is gayâ€™. – Daily Mail

As it turns out, these ideas are popular because social pressure dictates they must be popular. How do you want to appear to your friends — as a loving, giving, compassionate, liberal mind who wants to include everyone, or as some fuddy-duddy fossil standing up for those old silly concepts like tribe and morals?

The situation is further complicated by the fact that liberalism is a death spiral. It forces adoption of unrealistic policies and then, when those achieve symbolic victories but create disorder through the rest of the civilization, it blames those in power, the rich, religions or anyone else it can.

The result is a state of constant ideological war — the permanent obsession — and an increasing mania for adopting more and more extreme liberal policies to try to win that war:

SCHOOL students are being targeted in a major new push to force acceptance of multiculturalism by “embedding” it in the national curriculum.

Young Australians will be trained in “cultural competency” during classes as part of the Gillard Government’s plan to boost support for multiculturalism and outlaw negative attitudes.

Thousands of teachers have been surveyed about how the policy is working and to uncover racism under special research entitled “Rethinking Multiculturalism/Reassessing Multicultural Education”. – The Courier and Mail

After all, we don’t want to look bad to our neighbors and friends, do we?

We want to look like egalitarian superstars. This is how dogma is spread in a post-totalitarian society: the only way to succeed is to take on the popular dogma, and enforce it, which makes you an accepted member of the in-group.

Thus without a single central point of control, the all-encompassing control moves forward and absorbs every aspect of daily life. Total control takes over in the name of “good intentions” yet again.

I’m not here to preach freedom or liberty, by the way. Very few of us actually need much of those. What we need is a stable society that doesn’t require our input while we’re busy doing other things, like having careers, families and lives of our own. We need enlightened leadership to do this for us.

But that scares the egalitarians. That means putting some above others, “more equal than equal,” and so they lash out against it. They chant dogma from books like 1984 and repeat memes from Hollywood movies. Fight the power! — yet that replaces it with a more controlling power, which is our own obsession.

In fact, they like to disguise this great takeover as a kind of permanent permissiveness, or a free extension of social inclusion to all, including those with serious behavior problems:

The language and thought are drawn from a chapter of “A Study of History,” entitled “Schism in the Soul,” in which Toynbee discusses the disintegration of civilizations. He observes that one of the consistent symptoms of disintegration is that the elites–Toynbee’s “dominant minority”–begin to imitate those at the bottom of society. His argument goes like this:

The growth phase of a civilization is led by a creative minority with a strong, self-confident sense of style, virtue and purpose. The uncreative majority follows along through mimesis, “a mechanical and superficial imitation of the great and inspired originals.” In a disintegrating civilization, the creative minority has degenerated into elites that are no longer confident, no longer setting the example. Among other reactions are a “lapse into truancy” (a rejection, in effect, of the obligations of citizenship), and a “surrender to a sense of promiscuity” (vulgarizations of manners, the arts, and language) that “are apt to appear first in the ranks of the proletariat and to spread from there to the ranks of the dominant minority, which usually succumbs to the sickness of ‘proletarianization.”

That sounds very much like what has been happening in the U.S. Truancy and promiscuity, in Toynbee’s sense, are not new in America. But until a few decades ago they were publicly despised and largely confined to the bottom layer of Toynbee’s proletariat–the group we used to call “low-class” or “trash,” and which we now call the underclass. Today, those behaviors have been transmuted into a code that the elites sometimes imitate, sometimes placate, and fear to challenge. Meanwhile, they no longer have a code of their own in which they have confidence. – Charles Murray

If you ever find yourself wondering why your society is falling down around you, don’t waste time on the official dogma. It is nothing but excuses.

The fact is that every empire fails the same way, which is through an environment of moral cowardice in which reality is denied in favor of dogma.

Much as in the Soviet Union or Revolutionary France, the end result is the same: an accelerating of the denial brings greater demands for the dogma, until society paralyzes itself with the poisonous effects of many bad decisions.

Our permanent obsession is bringing us the doom that all pathological behavior brings. You won’t hear about this on the mainstream news, or in academia, or any other official channel.

When you think about that, you can see how complete the liberal bias has become, and ask yourself: what’s so powerful about conservatism that to keep it away, these people would destroy a civilization?