Diversity is failing for everyone 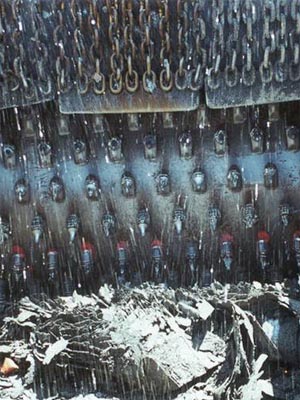 We all know that two or more objects cannot occupy the same space at the same time.

Culture is the organizing principle of a society. It is intrinsically linked with genetics, or ethnicity, because it co-evolves with the population.

Two or more cultures cannot occupy the same space at the same time. What results with “multiculturalism” is constant struggle for supremacy, racism and hatred.

Even the “anti-racism” displayed proudly and sycophantically by members of our chattering classes is a form of racism. It’s racism against the majority, disguised as ignoring the problem of cultural clash.

But ignoring problems doesn’t make them go away. It just makes them stronger.

While all that goes on, most of them are quietly miserable.

Women of all races bring home less income and own fewer assets, on average, than men of the same race, but for single black women the disparities are so overwhelmingly great that even in their prime working years their median wealth amounts to only $5.

Among the most startling revelations in the wealth data is that while single white women in the prime of their working years (ages 36 to 49) have a median wealth of $42,600 (still only 61 percent of their single white male counterparts), the median wealth for single black women is only $5.

Wealth, or net worth, measures the total of one’s assets — cash in the bank, stocks, bonds and real estate; minus debts — home mortgages, auto loans, credit cards and student loans. The most recent financial data was collected before the economic downturn, so the current numbers likely are worse now than at the time of the study.

That’s a bleak statistic. This means perpetual poverty for these people.

While this dismal result is clearly a consequence of low performance, it also indicates that these people are not in a supportive society.

A supportive society does not encourage whole swathes of its population to exist at subsistence level and take advantage of them when they are clueless.

In the clash of cultures, commerce wins, because it has no culture. It fits anywhere that there’s not a higher rule, like culture. Naturally, commercial interests support the breakdown of culture and ethnicity.

And then quietly but firmly, they rip all the wealth they can out of these people, such as by writing them impossible loans with the idea of later repossessing the property, including all of the wealth thrown into it for as long as its would-be owners kept making payments.

When we claim there is no culture, all actions that are profitable are good. Capitalism without culture is larceny.

College-educated whites make up about one-fifth of the adult population, while minorities account for a little under one-third. The picture is changing, but whites who have not completed college remain the backbone of many, if not most, communities and workplaces across the country.

They are also, polls consistently tell us, the most pessimistic and alienated group in American society.

The latest measure of this discontent came in a thoughtful national survey on economic opportunity released last week by the Pew Charitable Trustsâ€™ Economic Mobility Project. If numbers could scream, they would probably sound like the pollâ€™s results among working-class whites.

One question asked respondents whether they expected to be better off economically in 10 years than they are today. Two-thirds of blacks and Hispanics said yes, as did 55 percent of college-educated whites; just 44 percent of noncollege whites agreed. Asked if they were better off than their parents were at the same age, about three-fifths of college-educated whites, African-Americans, and Hispanics said they were. But blue-collar whites divided narrowly, with 52 percent saying yes and a head-turning 43 percent saying no. – National Journal

What no one wants to say about “diversity” is this: commerce imports workers who have no goal except to rise above their previous impoverished status. They are hungry. They are desperate. And so they are willing to give their lives to the job, just about.

This displaces the native working class who, in addition to having their jobs, want to be part of a community and have a social life. That after all is the promise of having a country: you have a support network, and so you don’t have to work all the time.

The imported kaleidoscopic diversity knows nothing more than its job, has no connections for a social life, and so is easily taken advantage of us and pushed to do labor-intensive jobs cheaply. This displaces the native working class, and provides cheaper goods and services, but as happens when you exploit people, produces shoddier labor and often cut corners.

No one wins in that situation.

For a society to succeed, its citizens must be able to unite around common core values. The most fundamental values are national identity and a wish for fellowship with oneâ€™s countrymen. National identity means that you feel like a Dane if you live in Denmark. Fellowship means that similarities â€” first of all the fact that you live in the same country â€” means more than differences, for example religion, color, or country of origin.

National identity and the feeling of fellowship increase work morale, taxpaying morale, morale in relation to social services, and respect for the countryâ€™s laws in general. People who experience themselves as part of the community will feel that they harm themselves if they harm the community. National identity is also important for respect towards the nationâ€™s authorities.

The sense of community is crucial to the quality of life for us â€œpackâ€ animals, and common core values are the foundation of the mutual trust and mutual helpfulness, openness, understanding and respect among the population. People who are deeply divided on core values and who want the community to evolve in completely different directions simply feel less fellowship with one another.

When people identify with a culture whose values are not rooted in the nationâ€™s indigenous culture, this identification happens at the expense of identification with the greater community. The step towards acting in violation of the communityâ€™s interest is therefore shorter, which is one of the reasons for the dramatic over-representation of certain immigrant groups in crime and unemployment statistics.

Multiculturalization of a society, therefore, leads to an increased need for control, prohibitions, police, and tougher sentences in order to prevent internal factions from cheating or committing crimes against the community. Multicultural societies thus move easily towards a less democratic and more fascistic condition. The former German chancellor Helmut Schmidt concludes in hindsight: â€œThe concept of multiculturalism is actually incompatible with a democratic society. â€¦ If one asks, where in the world are multicultural societies functioning, he quickly comes to the conclusion, that multiculturalism can only exist peacefully within strong authoritarian states.â€ (Hamburger Abendblatt, 24 Nov 2004). – White Locust

Diversity has driven America to turn against itself, both through class war and now ethnic-cultural conflict, but most of all through population displacement.

There is no sense of loyalty. If we find someone new who will do it for cheaper, even if the quality sucks, we’ll replace you immediately. Your old neighborhood isn’t yours, and you don’t belong to a group.

You’re a just a worker. You’re equal, sure, but that just means it’s easier to make you an interchangeable part. A replaceable cog within the machine. Your equality means you have no job security and anything you gain is temporary.

This affects more than the white working class. It affects everyone. There are no winners in diversity. Not whites, not blacks, not Asians, not Hispanics (and any other groups you can name).

Everyone becomes fodder for the machine.

But at least we’re all equal, and anti-racist.