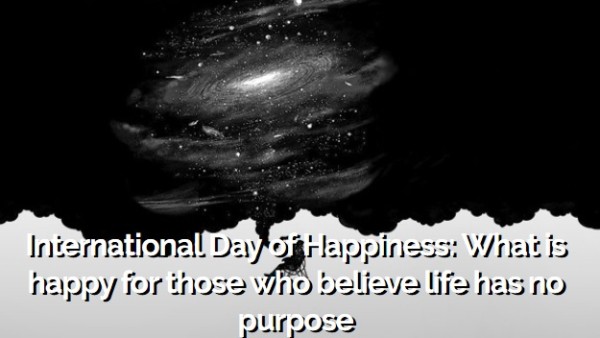 Over at DNA India, the Sunday features section includes a brief mention and partial interview with myself regarding nihilism and how it intersects with happiness. You can read the article, “International Day of Happiness: What is happy for those who believe life has no purpose,” on the DNA India site in Roshni Nair’s column.

In the meantime, here is the full interview for grins ‘n’ giggles:

Before kicking off my queries about nihilism and happiness, Iâ€™d like to know what you make of World Happiness Day.

In my experience, the most common human event is the takeover of a term. Certain words, symbols and images convey great power, and so those who want to be powerful attempt to possess those things for purposes of thought control of the group. They almost always do this by creating a positive vision that involves the term, and then use that vision to define other terms as good or bad, which makes people want to do the good and run away from the bad. It is mind control, just not the type with radio waves and mystical charms. It operates through peer pressure.

As you allude to later on, there is a whole industry dedicated to making you think that what you have is not happiness, and that therefore you are bad, and should spend all of your time and money on self-help books about happiness. Luckily “happiness” is a vague term — it can mean “the state of momentary happiness” or “a state of mind of being happy” depending on context — and they can utilize that ambiguity to inject their own definition. This clever ruse makes them gatekeepers of what makes you happy (good) and what makes you sad (bad). This gives them imense power.

This particular charity I like more than the rest because they dared to have a campaign titled “Your happiness is part of something bigger.” Unfortunately, “something bigger” will quickly be redefined to mean charity work in odd places or some other rather individualistic pursuit, but for now they make a good point that our modern societies are epidemics of loneliness and isolation. That alone is quite important because most people deny that and pretend that everything in society is good, when in fact some is good, and some is rotten.

Does happiness exist, or do you think itâ€™s just an umbrella term for the absence of suffering?

I am certain that happiness exists, but I am also certain we very rarely recognize it. “Happiness” varies its meaning in context; if you say “I seek a life of happiness” you are using a different word than when you say “that ice cream brought me happiness.”

Happiness in the moment may mean absence of suffering, as Arthur Schopenhauer suggests, but happiness in the life-long sense consists of contentment plus the realization that you are heading in the right direction. People like to feel that they are not wasting their lives, and that requires them to be engaged in some task external to them which is “good” in addition to having a pleasant life which they basically enjoy experiencing.

Happiness is misunderstood. On one side people like to think it means a constant state of ecstatic joy, forgetting that if it was constant, this would be a very boring life. On the other side, they say things like “happiness” is the absence of suffering and forget that we make affirmative decisions to improve our state beyond simply eliminating suffering.

As a nihilist, would you agree with the saying that goes, â€œYou canâ€™t be happy unless you choose to beâ€?

Absolutely. Enjoying happiness consists of giving yourself permission to recognize you are happy, and then enjoy it. Someone who is determined to be unhappy regardless will never find happiness. Someone who believes in happiness, and seeks it, must choose to be happy when he finds it even if it is not what he expected (in this life, things rarely are what we expect).

I think of Michel Houellebecq’s comments on a somewhat tangential topic:

INTERVIEWER: What is your definition of a Romantic?
HOUELLEBECQ: Itâ€™s someone who believes in unlimited happiness, which is eternal and possible right away. Belief in love. Also belief in the soul, which is strangely persistent in me, even though I never stop saying the opposite.

A line from your metalcrypt interview back in â€™04 read: â€œThe quickest way to find happiness in life is to find out what’s real.â€ Can a nihilistic life be a happy â€“ or rather, fulfilling â€“ one?

I’ll go farther and say that a nihilistic approach — which is basically a form of extreme realism and ego-denial — is essential to finding happiness. You need to be aware of reality and honest with yourself before you find any joy in anything. Otherwise, it is a projected joy, an unstable and untrustworthy thing. People say you can be happy by acting happy, but the point of the divide between self and world is that the two must be in agreement or you will never believe your own emotions. And instability is by definition not very happy.

A nihilist will look at life and work on his own perceptions until he is as close as possible to seeing what is real. This lets him perceive things, both physical and metaphysical, that tell him what is important. When he acts on those and achieves them, even if to a minor degree, he then has the groundwork of happiness in life, made by his own hands.

A nihilistic life is thus not a magic bullet like a self-help book or a strong drink. It is a steady process of, for lack of a better word, “maturation.” In it the young nihilist learns to discern between illusion and reality, and by acting on reality, is able to filter out all the stuff that wastes his time, and replace it with things that return contentment, happiness, even joy. At the end of it, the real and the ideal have come into alignment and his life is full.

People think we are angry bearded men who live in vans and basements. We are in fact people who say that “you must live according to what is real, not the illusions inside your head” and we tend to live in vans parked in basements. At least, I did for almost a year. It was a great experience because I owned very little, had few obligations on my time, and could spend my days exploring the world and the great works of literature, philosophy and science. My real piece of advice there is to remove the automotive seats and put a real sofa or two in your van. Comfort makes a world of difference.

Pragmatists often cite â€œthe happiness industryâ€ as a tool of conformity â€“ the kind, they say, which pathologises sadness/treats it as a pariah emotion. What are your views on this?

The happiness industry is really a sadness industry; they preach what their audience lacks, but is happiness, but their real financial incentive is to disguise sadness as happiness so the audience keeps coming back. If self-help books worked very well, many people would be cured and never buy another one. That’s a bad product. For them to enact thought control through language, they need to first convince you that any kind of sadness or discontent is a sign that your life is unhappy and you need their products.

Again the time scale fools us with this word. Sadness is part of a happy life; a life without emotional ups and downs would be not only boring, but would steal all power from joy. Ours is a relative universe and we do not know “hot” without “cold,” nor “joy” without “sadness.” What I have found is best to avoid is the entropy of the soul, a type of boredom, depression and purposelessness all rolled into one. With it, one can never be happy.

I read that you started identifying as nihilist when you were in your teens, in large part due to your parents being academics and exposing you to such literature. Other than this, were there other influences/influencing factors that made you gravitate towards nihilism?

I became a nihilist at age fifteen, having slowly developed my philosophy of total realism and denial of human judgments, feelings and desires up until that point based on my observations of adults, who terrified and depressed me. My background was a broad reading in the classics of Western literature but more importantly, time spent alone in the forests near my home. At that time, our American city was small enough that there were boundaries to the comfortable glass, plastic and concrete world where the only rules were transactional. I went beyond these boundaries, into the woods, and spent whole days and sometimes nights there, observing the type of order I saw. I approached it much as I later would computer programming: looking into the structure and process, or abstract relationships between objects as expressed in cyclic interaction, of natural creatures, plants and forces like rain and sun. I went from the simplistic, deranged human world to this place of utter clarity and profoundly brilliant design and my brain was at rest. From this transition point, I realized that the enemy of humanity was not Hitler, Satan, the Jews, the Rich or the other scapegoats, but our own tendency as individuals toward giving in to illusion because it supported our appetitive impulses. “We have met the enemy, and he is us.”

Over the years, how challenging has it been for you to find a balance/navigate the despair associated with nihilism with happiness/fulfillment?

Oddly, I do not find despair in nihilism; I find it in humanity. Having to live in a failing civilization, among a failing species, in which idiots perpetually rule and only illusions are famous or revered, yes, that’s a bit of an ugly fate and a depressing one. But nihilism? My version of nihilism is complex because it denies human orders in favor of the type of mathematical order that underlies reality. For that reason, it is open to possibilities beyond the material, so long as they are not mere human wants rephrased as truths.

How pivotal has ANUS been in making you the person you are today, and are you still active on the site?

ANUS was an excellent early experience from which I learned a great deal about how to organize and express ideas. In subsequent projects, I have tried to expand my message to be clear to more people and less idiosyncratic. ANUS today remains an archive that people visit at numbers that still strike me as oddly high, but it has been mostly drowned out by the “new internet” and its insistence that its one method of expression (big media, Wikipedia, social media) is right and everything else must be silenced. This is how humans control each other: they set up a fake truth that is a subset of the actual options possible, and then force everyone to obey, which actually shuts those people off from some possibilities they need to at least be aware of. My plans for the future are to turn these old writings into a series of books, the first two of which are now complete and in search of a publisher!