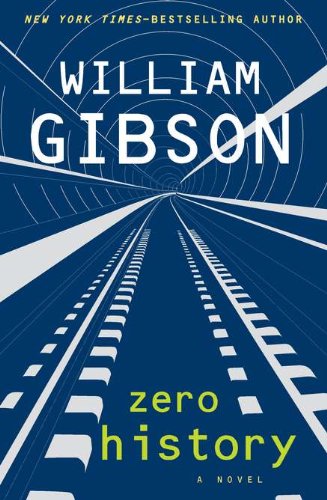 William Gibson burst onto the fiction scene in 1986 with his cyberpunk thriller Neuromancer, and since then has been trying to become more like his heroes and influences, Thomas Pynchon and William S. Burroughs.

The literary leanings of his works since 1995 have brought us a new Gibson: a more refined writer, a keener observer of current trends instead of a projector of distant futures, a more savvy designer of tales. The only caveat with his later work is that these books are not about anything.

A book about something has a central topic and a clear idea. It then develops a story to explain that idea, translating abstract knowledge into concrete examples through the experience of characters. Gibson works backward on books like Pattern Recognition, All Tomorrow’s Parties and Zero History: having no dominant idea, he throws in a laundry list of interesting stuff and ties it together with whatever topic he can use to connect the parts. The tail wags the dog, in other words.

Zero History mimicks the action layout of Neuromancer. A lonely hacker pairs up with an assertive female under the guidance of a mysterious thought-leader, then they embark on pursuit of a sacred symbol, at which point they must give up on their social conditioning and become feral hackers who break some rules to get to the truth. It’s a good formula.

Gibson must be like a Zen monk wandering the streets of our modern societies in a state of mindfulness. He picks up on every developing trend, from military couture to Norwegian black metal, and fits it into a developing story and tries to layer a “meaning” over that with a vague, semi-spicy narrative about the imposition of memetic “truth” or holy grails upon the rest of us media sheep.

We like his characters, but don’t believe them. They are almost entirely without past, not scarred by their experiences despite those being traumatic as the book hints, and do not develop as people so much as adapt to their situation without changing their constant forces of personality. At best, they are Jungian symbols for parts of our consciousness we wish we knew better; at worst, they are carboard front window displays from video stores, waving cardboard arms to the pulse of an electric motor stapled to their manila backsides.

Because it lacks any real central theme, and as a result is a collection of almost-related ideas stuck together with the sticky glue of “meaning” in the vaguest sense, the book holds together aesthetically but falls apart under the skin. That is to say you read until page 160, and then you skim to the end. There are few if any surprises. As with Pattern Recognition, the rich montage of interlocked concepts that sparks the text fades so that by the second half, the writing is nearly uniform, functionalist. (Incidentally, this problem is shared by most artists with a great idea after which they must support a career, including Pynchon and Metallica, whose later works are also salads of random bits held together by the slick but hollow implication of a greater meaning or if not that, at least a lifestyle.)

Like Pattern Recognition, this latest book is Gibson at his post-scifi best. There’s a lot to admire in here, even if the book as a whole takes a “short cut” that leads it on a wandering path over the earth with no clear purpose in sight. In fact, this book re-uses characters, settings and germinal ideas from Pattern Recognition, just jazzed up a smidgen with the Neuromancer-style more action-oriented format. It’s far better than the paranoiac and confused (but not collapse-aware, like Neuromancer was) Spook Country, which truly was a muddle. This is clearer, with more to think about, but it cannot offer us any true guidance.

Dignity of Life Includes Dignity of Death | Dissensus of the greens