Why We Fight: Manifesto of the European Resistance by Guillaume Faye

Why We Fight: Manifesto of the European Resistance
by Guillaume Faye
274 pages, Arktos, $25 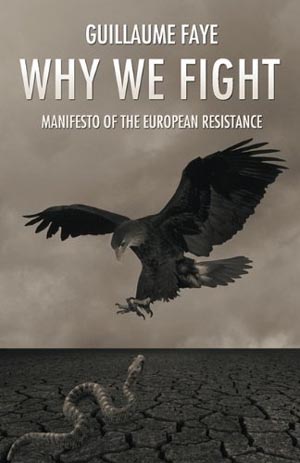 This book combines two excellent concepts: a brief summary of the European New Right and its goals, and more importantly, a glossary of terms which re-captures many concepts from their definitions as seized and contorted by liberal academia.

For most people in the United States, “nationalism” means “patriotism,” because that is how the big media talking heads (and hence, their friends, who repeat things they’ve heard in order to seem smarter) use the term. However, professional sources still note that nationalism is the concept of ethnic self-rule for all ethnic groups, while patriotism is loyalty to the nation-state and its political dogma and economic system. (p. 200)

Faye renews terms that have been forgotten by all but historians and philosophers, as well as a few recent hilarious additions (see “Mental AIDS” on p. 190). Through this vehicle, he is able to construct an argument from the terms already in use, making it drop into place as part of arguments already made. This is the power of his Metapolitical Dictionary, which comprises the bulk of this book.

In addition, the glossary helps keep focus on terms that signify important parts of a worldview that otherwise would be forgotten, in the rush to accomplish big things (limit democracy, instill nationalism, ameliorate consumerism). This is a careful ground-up work that constructs the delicate balance of terms that allow us to understand the underlying concepts of an order beyond the one we have been taught in popular notions and state-filtered education.

Etymologically, a ‘nation’ is a popular and political community made up of those of the same ethnic origins, of the same ‘birth.’

The nation ought not to be confused with the nation-state. ‘Nation’ and ‘ethnos’ are the same word, designating a community whose members are of the same origin. To oppose the nation to the Empire is, semantically, to misunderstand it. An empire, in the positive sense, is a federation, an ensemble of similar, closely-related nations — a ‘federal nation.’

The shorter first part of the book is a more triumphant, less academic summation of Faye’s beliefs expressed in other works such as Archeofuturism: European visions of the post-catastrophic age. It is a more exuberant, more contemporary and less abstract version of what he expresses in that book and other writings.

In it, Faye outlines the situation: the West is dying because it has lost a sense of biocultural identity and with it, the ability to make decisions based on values on not simply reactions. At the same time, the results of 400 years of insane liberal policies have come home to roost, which Faye sees as resulting in a “convergence of catastrophes”: failing water and food supplies, climate change, warfare, racial strife and economic collapse.

In addition, he writes about the process of coming to political power and the necessity of unity without corruption by ideologically-confused people; also, he clarifies in simple language how to define the political viewpoint and how to answer its critics. Throughout the summary, he hints at the necessity of an absolute struggle, which is a popular vision among those who have taken the difficult step of rejecting their society and its ideals “as it stands now.”

While the New Right as a movement birthed by thinkers and academics was initially vague in nature, Faye corrects that tendency with a book that uses lists, bullet points, and clear and accurate language to express itself:

Good relations with the Arab-Islamic world cannot but take the form of an armed peace that never lowers its guard. The sine qua non (“necessary prerequisite” – Editor) of such a condition will entail the end of its colonisation of Europe. As the Qur’an says, Islam needs to ‘put down its hand to avoid having it cut off.’ It won’t do this if there is a sword in its hand. The idea of a ‘European-Arab Mediterranean alliance’ based on allegedly common interests is a fool’s errand without any historical or economic basis. Europe has no need of Africa or the Middle East, which are a drag on her, a financial, economic, and human burden, and increasingly a menace. (71)

Faye makes compelling arguments but in this work, he strives not to argue his point so much as to make it plainly distinct from all around it, and thus to capture space in the intellectual free-for-all-zone that is occurring as a future power vacuum becomes obvious to observers of Western collapse. What makes this book a winner is that instead of blindly bloviating, or retreating into abstruse theory, Faye gives us a groundwork for a new movement.