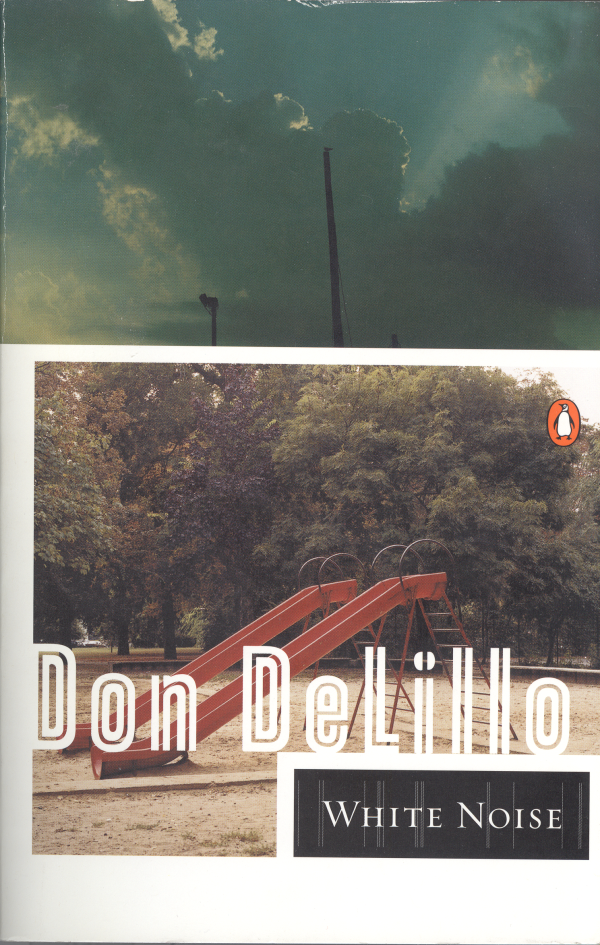 Reviews of postmodern novels present a problem because the postmodern novel, which quotes freely from mainstream fiction genres and wraps them around a metaphorical core, builds itself outward from setting more than character to the point where revealing too much about the setting is to reveal the plot. The characters are generally like occupants on a fast-moving train, watching the changing setting outside the window and rarely able to take any action except periodically have extreme responses when the absurdity peaks.

White Noise entered American consciousness in 1985 and accurately reflected how Western civilization saw itself at the time: going through the motions, unsatisfied and empty, in fear of death constantly because of the purposelessness of it all, and trying to distract from that fact. The thesis of this novel might be summarized as “the self-conscious society dedicates itself to death,” and that phrase could also serve as a handy epitaph for the West. Throughout the book, characters navigate a web of rules — both official and social, but mostly damaging where values have become rules — which have converted life from a process of having a goal, to an endurance test of reacting to a civilization dedicated to social engineering removed from life itself. Characters know what they ought to be doing not on a moral level, but on a social level, as they try to have lives that others would admire. They also know how to succeed by manipulating The System and that also defines what they must do, but they have no heart in it. Hilariously, the most human scenes in this book occur when people are shopping, which from what I remember of 1985 America is pretty much spot-on accurate.

The book centers around a professor, Jack Gladney, who is the leading expert in Hitler Studies, a genre of academia he conjured up that has since become popular. As he struggles with the emptiness and sublimated fear of suburban existence, a chemical spill near his town forces its evacuation. This provides him with a backdrop for analysis of death and its relationship to the self-conscious society — that which critiques, analyzes and compares itself as itself instead of relative to some external goal, like natural law or reality at large — through the highly artificed characters of his wife and children. As in most postmodern novels, characters are “larger than life” or transparently symbolic in their attributes and roles, and his family provide most of this contrast within the book. Frequently these characters discuss death and meaning in life with the gravity of philosophers, using the consciousness of itself in the postmodern novel to allow characters to be both transparent and viable. Gladney illustrates the point of the novel in an accidental thesis statement:

When the showing ended, someone asked about the plot to kill Hitler. The discussion moved to plots in general. I found myself saying to the assembled heads, “All plots tend to move deathward. This is the nature of plots. Political plots, terrorist plots, lovers’ plots, narrative plots, plots that are part of children’s games. We edge nearer death every time we plot. It is like a contract that all must sign, the plotters as well as those who are the targets of the plot.”

Plots factor heavily into the narrative of the book because both shadowy government forces and individual characters constantly hide information from each other for manipulative purposes, or plots. They justify these events with “good” moral-sounding ideas but ultimately are scheming to control, and through control to have power over death by driving out any thoughts except that their lives and careers are excellent. As a result, no character speaks honestly except when in philosopher-mode, and then most of the comments are speculative as with the above. As the family evacuates from one location to another, trying to avoid the mysterious cloud of industrial waste that hovers above the city, they are left in a void of clarity created by the plots of government and corporations as well as their fellow citizens. In addition, they start to see how in their own lives they have plotted around meaning and actual connection to existence, and instead have become symbolic in what they do even if they find it meaningless. If the disaster reveals anything, it is that most of what people do is indeed unnecessary and can be suspended, but that they have no idea how to fill their own time. This outlook proved prescient over the next three decades. In addition, DeLillo observes — through his characters — some flavors of reality that readers of this blog might enjoy:

“How familiar this all seems, how close to ordinary. Crowds come, get worked up, touch and press — people eager to be transported. Isn’t this ordinary? We know all this. there must have been something different about those crowds. what was it? Let me whisper the terrible word, from the Old English, from the Old German, from the Old Norse. Death. Many of those crowds were assembled in the name of death. they were there to attend tributes to the dead…Crowds came to form a shield against their own dying. To become a crowd is to keep out death. To break off from the crowd is to risk death as an individual, to face dying alone. Crowds came for this reason above all others. They were there to be a crowd.” (73)

The crowd to which they belong has assembled itself on the basis of altruism, or the use of gift-giving from commerce to unify itself as a control mechanism (84). Gladney however cannot acclimate to this life because it is fundamentally a tool in search of a purpose, and unlike the crowds described, does not acknowledge death but attempts to hide it. He sees much of his own life revealed as pointless during the evacuation and subsequent events, and this puts him on a new quest which involves suppressing his fear of death. That in turn brings the book to a revelatory finish in which he uncovers the nature of plots, which is — in classic postmodern form, derived entirely from Nietzsche’s On Truth and Lies in a Non-moral Sense — that symbols have replaced reality and in turn, have replaced our ability to have honest intent with constant manipulation, neurosis and control:

The drug not only caused the user to confuse words with the things they referred to; it made him act in a somewhat stylized way…The precise nature of events. Things in their actual state. Eventually he worked himself out of the deep fold, rising nicely, sharply outlined against the busy air. White noise everywhere. (310)

Here is why I get off the Don DeLillo train and call the above out as nonsense: our problem is not symbol replacing reality, but appearance replacing reality because in our egotistic altruism of equality, we have made reality-study taboo and replaced it with what the Crowd thinks. Nietzsche described the mechanism of this happening, which is that the egalitarian surge of the enlightenment changed the definition of symbols and values, forcing their re-evaluation according to their purpose and not our moral consideration of them. Popular opinion translated that into blame of the symbols themselves, since we cannot blame ourselves and admit the failure of the People’s Revolution, so we blame our tools like every lazy and inept laborer since the inception of time. Seeing this sentiment at the core of an otherwise sensible book makes someone who still lives for the purpose of excellence want to throw the book out of the window for being so tragically flawed despite so much other quality writing, thought and analysis.

As the cliché goes, a greatest strength becomes a greatest weakness, and DeLillo goes astray because he is an excellent writer with a lot to say but lacks the consciousness above that to edit this stuff down. Too many long conversations make their points through extended repetition, and too much is figurative without need to be. These characters could act out many of their ideas and demonstrate more connection to them with everyday events, and do it quickly, in the style of the father of the postmodern novel, William S. Burroughs. In Naked Lunch, figurative transfer occurred through setting and narrative voice entirely, with characters taking on roles but retaining strong personality. In White Noise, like most postmodern novels of its era, personality is washed out and replaced by an almost robotic duty to act out role. That in turn forces much of the dialogue to have the pace of a New Republic article, painfully exploring the depths of some topic without ever really gaining a position of strategic view. Burroughs cuts to the chase; DeLillo talks around it; this book could lose the usual hundred pages with no loss of communicative power.

Books exist both as objects in themselves, where the writing convinces us to enjoy the story, and within context, where they form part of the wave of thought on an idea and serve to articulate it much like the conversations they so rigidly memorialize. White Noise showed the Western world that in its postwar state, switching from culture to consumerism and ideology, it had completely lost control of its own destiny. Its people are bored, lonely, purposeless and miserable about mortality because life has literally no meaning except commerce, pleasuring others socially, and obedience. Humanity, the clever animal, plotted itself out of tension but in doing so, released itself from purpose, and so everything that we do becomes a background hum to an ego unleashed to find a purpose for itself. Our victory is our defeat, our strength is our weakness, and in the meantime, people wander like the characters in this book, giant brains in search of something to use them on. White Noise remains shocking and vital to this day because conditions have not changed, and inspired whole generations to secede from the nonsense chain of obedience to the Crowd that is modern society. Despite its flaws, it still carries the fire of discontent and emptiness and channels it outside the individual toward a loss of direction on a cultural level, and creates from that a viable critique of the lost West.