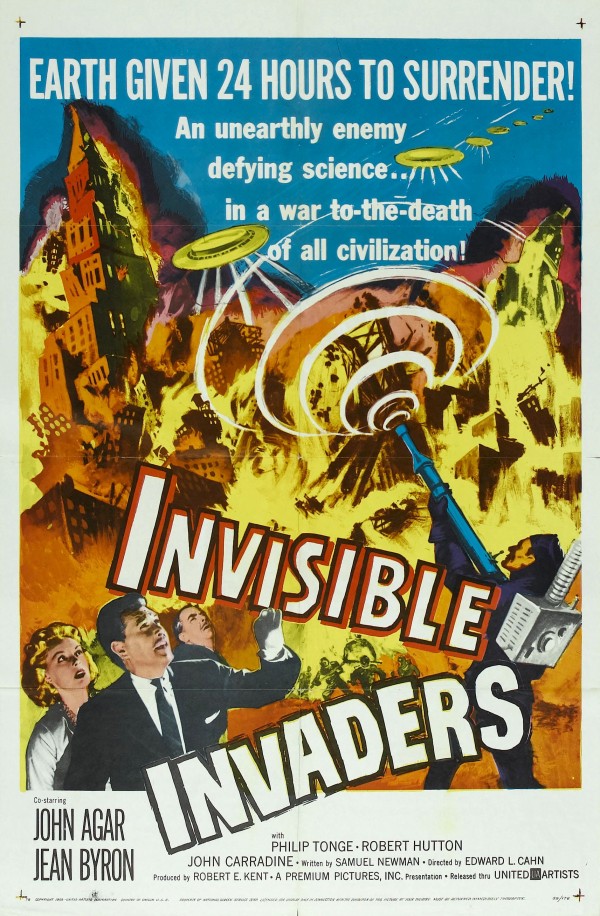 Movies like this clarify the “golden age” of movies: things were simpler, audiences less demanding and, thanks to common cultural guideposts, it was easy to write a script that fulfilled audience expectations without having to be unduly saccharine. At the same time, movies like Invisible Invaders feature boxy plots, vague mechanics and sometimes, gaping plot holes. For a low-budget sci-fi flick however it seems entertaining enough.

The reason this review pops up here on Amerika involves the setting of this movie. Earth is under attack by invisible invaders who wander around and re-animate the recently dead, using those as avatars through which they attack humanity. This trope appears in other films, as recently as Surrogates (2009) which explores how modern humans live through their avatars, but here it takes on a paranoid dimension. The invaders want earth to surrender so it can be ruled by a galactic dictatorship. Humans resist, but must overcome their own weakness in order to discover a scientific solution to the threat.

That combination of tropes — zombies plus unseen overlords — ranks this film high on the paranoid scale, and also suggests a primitive metaphorical consciousness. Crowdism seems to animate the bodies of the recently dead, or at least hopeless, and turn them into unstoppable weapons of human destruction. The rest of humanity fails at opposing it because it simply wants to give in, hand over some of its money in exchange for peace, and get back to television, beer, donuts and shopping. As in this simple little film, the answer is found in banishing doubt and tackling the problem head-on.

Perhaps this film was more influential than realized, and lived on in Star Wars or another movie using modern editing and detailed plot structure. Maybe it was forgotten except by hipsters who tromp in groups down to basements to watch this between PBR burps. Yet for someone at the height of the early Cold War, with a Communist fifth column at home and shadowy espionage abroad, it may have struck a note. The relentless sociopathy of leftists resembles the zombies in this film, and the invisible enemy — a seductive but illogical notion of equality and the method of prioritizing popularity over truth — wanting to take over the earth resembles the leftist agenda quite closely. Without adding a spoiler, perhaps the method of ultimately solving the problem is metaphorical as well as we struggle in a later time with the same dilemma in new camouflage.

The problem with gay marriage | White Noise, by Don DeLillo (1985)