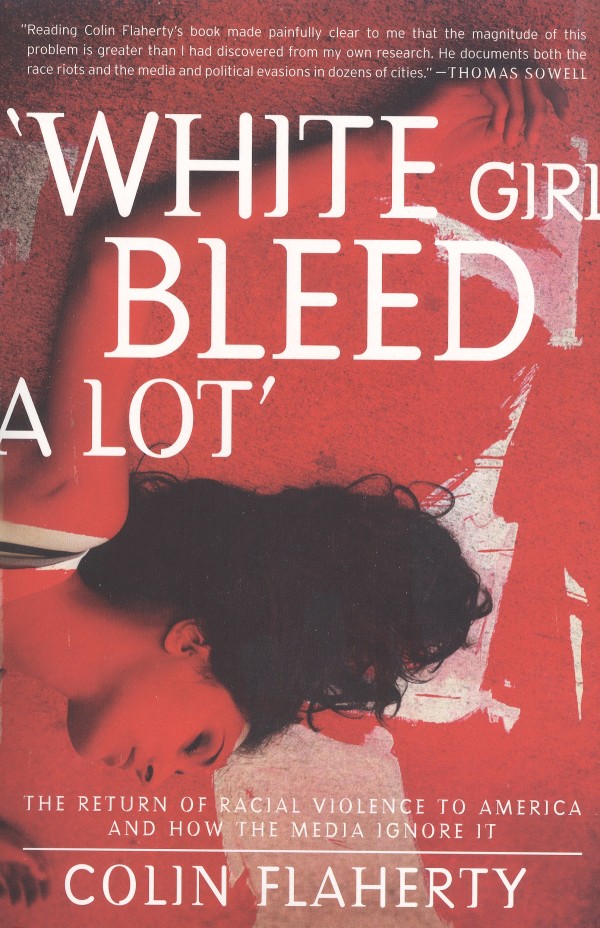 Since our last review of Colin Flaherty’s work with the previous edition of this book, following up on the original issue of this provocative work, White Girl Bleed A Lot: The Return of Racial Violence to America and How the Media Ignore It has grown and polished itself to the point where it is more professional than the media narrative it critiques.

While on the surface this is a book about race, underneath its nominal topic its nature as a critique of media emerges. An experienced journalist, Flaherty reserves his ire for and targets his book against the media for being in denial of the obvious. He walks a treacherous path: those who notice failures in the media narrative are usually branded racist, sexist and homophobic and run out of their jobs, homes and friendships. But Flaherty cannot be accused of any of these. He makes it clear that he is speaking of a subset of the African-American population who may have legitimate grievances, and that these grievances are as ignored by the leftist media as are the riots, violence and knockout games of an angry underclass.

American journalists have written about race since before the founding of the nation, as slavery was a controversial topic even at that time. Experience with media over the past decade has shown to me the appalling degree to which news sources, fiction writers and academics are willing to outright lie about their subject. Watching the New York Times promote a false rape accusation as true when they knew it was dubious, and then refuse to issue a correction and seeing a concerted and dishonest media campaign to hype Ferguson, MO into riots finally woke me up, but I had been seeing it for years. The eternal truth is that humans are monkeys and we respond to emotion, much like a tribe of Bonobos comes alive when two members fight. Our monkey-brains are wired for conflict in which there is a good guy and a bad guy and we participate so the good guy wins, which defeats symbolic evil and exiles it, leaving by our absurd simplistic system of morality only that which is good. Like the ancient Jewish ritual of the scapegoat, the burning of witch doctors in Africa, or the witch-hunts of colonial America, the monkey in us comes out and evolution is defeated. We follow the appearance of good versus evil like zombies, smashing down the “bad” so we may have the pretense of considering ourselves nothing but “good.” In reality, which few Americans encounter because they are not in leadership positions where paying attention to more than what people like to think is true is important, most things are not good or bad but a little of both, and the real question is how to balance them to find a positive outcome. That notion becomes important toward the conclusion of reading this book.

Flaherty counteracts the power of the media to lie by introducing facts contrary to the narrative. He starts with a single one, then builds a pattern around it, and then shows how that ritual repeats in every city across America. Soon it becomes clear: this is not just a media oversight, but a media coverup. Probably not a planned one, but a consistent one nonetheless. American media have benefitted from the fear of racial strife for over two centuries, and they know how to milk it for every Nielsen point that it is worth. Every movie must have a black president, going back to the 1980s; every news story about the inner city must feature uplifting angels who are impoverished only by the cruelty of history; certain facts like crime statistics, IQ data and hormone differences must be suppressed and claimed to be taboo using the following key terms: “pseudo-science,” “rambling,” “discredited.” The media narrative is so ubiquitous that we do not even notice it anymore. Flaherty makes us notice and uses the phenomenon of crypto-race riots to make his point. From the first decade after the Civil War through the 1990s, America never went more than a dozen years between violent race riots that left large portions of her cities burned and many dead. This came to a peak in the 1992 race riots in Los Angeles over the beating of a PCP-abusing Rodney King by several LAPD officers.

There, the narrative broke down. The media did its groundwork, portraying King as an angel of light whose feet never touched the earth. But then the 100 mph chase came to light, the past domestic violence charges, and a long rap sheet, in addition to the knowledge that the video shown by the media had been slowed down and edited to make it appear as a deliberate beating instead of the frantic subjugation of a violent criminal that it was. All of this could have been counter-acted except that the resulting riots did not take the form the media promised. They promised us 1960s style we-shall-overcome linked arms and protest, but instead what came out was 1990s style gangbangers smashing into stores to steal everything they could and then burning down the whole block. The most prominent images were no longer those of Rodney King, but of Korean store owners firing back against criminal mobs, and the beating of Reginald Denny into mental retardation for no sin other than being white in a truck on the day the whole thing blew up. Should have checked your news report, Reg.

It is without doubt that the media hyped the Rodney King situation into a riot. They gave permission to the rioters on repeated news broadcasts in which they stated that surely riots would come about, and repeated the lies about the “injustices” done to Rodney King, without asking his past wives about any injustices he might have done to them or the people through whose lawn he crashed at 80 mph on one of his drunken evasion attempts. I remember a news broadcast where a female journalist went out into one of the non-gentrified but also not dangerous neighborhoods where a fire had been spotted. In her view, this was the beginnings of the riot. The comedy compounded itself as she tried to find someone who spoke English to tell her what was going on. Finally, she snagged someone fleeing the scene, who explained in broken English that it was simply an attic fire. The news team packed up and drove to another location to see if that fire was the start of the riots. They did everything they could to encourage the riots, from mentioning the long history of African-American victimhood to showing pictures of the rows of expensive stores before flashing the camera back to shots of tenements. The message was: “A race riot now would be justified, and we are on your side. There will be no consequences.” We all know how that one one went down.

Flaherty’s assault on the narrative takes a far less obsessive form than the media itself. He simply reports facts and points out contradictions. He does not target any specific ethnic group, nor issue an opinion on whether these race riots are a legitimate response to grievances. He simply shows us, time and again, how racial violence breaks out and the media covers it up. He shows the facts, and populates the books with many links to YouTube videos — some of which are mysteriously deleted on a regular basis — showing the incidents in question. The races of perpetrator and victim are clear. White Girl Bleed A Lot: The Return of Racial Violence to America and How the Media Ignore It avoids seeking reasons why and a good guy and bad guy in these riots. It demands we simply look at the facts, stop acting out a narrative that may have never been true, and break through the media wall to discover what is true and ignored. Written in a tightly focused and conversational style, it makes for a fast read that will have repercussions in how the reader views the official history of this nation in years to come.

The zombie propaganda of a dying empire | Neoreactionary fragmentation