The Way of Men by Jack Donovan

The Way of Men
by Jack Donovan
62 pages, Dissonant Hum, $6 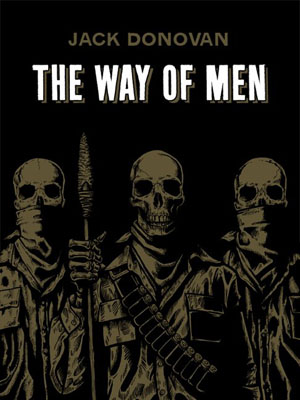 Very many academics have studied gender but very few have studied masculinity. As the presumed original privileged gender, masculinity does not interest those who are looking to re-make nature in the image of human preferential notions. But Donovan, along with only a handful of others at the top of the masculinist ecosystem, has undertaken a penetrating analysis of what it is to be a man.

His latest, The Way of Men, first gives us a working definition of masculinity as an expression of the ideals men must share to be effective in hard times. It then describes the inherent tension between masculinity and society, expressed as the contrasted ideals of “being a man” and “being a good man.” Donovan disentangles the two, showing that the masculine imperative of the former conflicts with the type of compromise-based society favored by committees, merchants and the politically-correct that the latter endorses. Finally, he gives us a roadmap for the time after such a degenerated society, and hints on how to get started before that downfall.

A man who is more concerned with being a good man than being good at being a man makes a very well-behaved slave. (32)

For an e-book that runs to 62 pages, that’s a lot of information in a compact form, much less an ambitious thesis. Donovan keeps the writing interesting throughout with eclectic examples and analogies. His verbiage doesn’t sparkle, or quirk, or do any of the other stuff that self-pitying literary magazines do. Instead it keeps a solid focus on its theme while yanking in related ideas to broaden our horizons. The result reads like it could be a keynote address and keep the interest of a large audience. This enables him to tackle controversial ideas from their gentlest sides, as if discussing rotor diameters for automatic transmissions.

What is most convincing about the prose however is that for writing that could appear in a mainstream magazine, The Way of Men is forceful and direct in a way that modern people would consider feral. It is not apologetic, or evasive. It is not indirect or passive. Like a boxer, it walks right to its objective and begins the pummeling. It is not a tantrum, or a rant, or any of the other artifacts of the democratization of language. It is Jack London-style writing, words applied with intent and unrelenting pressure, yet with an inner soul and attention to detail. Nothing is unnecessary. This alone lifts it from the cloud of frustrated impotence that is most writing about masculinity and manliness.

The central theme of The Way of Men is the definition of masculinity not as an individual trait but a social one. Masculinity according to Donovan is a sense of being able to uphold one’s role in a tribe by virtue of the four cardinal abilities of a man, which are Strength, Courage, Mastery, and Honor. In his architectural description of these abilities, Donovan relates them to the ability of men to rely on each other in pursuit of the objectives that have been the traditional domain of men: hunting, defense, conquest and exploration. These are things men will live for, or die for, and it’s the latter that gives them the significance to convey meaning to life through them.

Men respond to and admire the qualities that would make men useful and dependable in an emergency. Men have always had a role apart, and they still judge one another according to the demands of that role as a guardian in a gang struggling for survival against encroaching doom. Everything that is specifically about being a manâ€”not merely a personâ€”has to do with that role. (12)

The Nietzschean undertones to this book are not concealed, but are downplayed from the almost metaphysical ideals of the German philosopher and translated into an assessment of human experience and what makes existence worth surviving. This is an existential view, not a utilitarian one. Most of our social rules and regulations consist of utilitarian thinking, like “What quantity will materially benefit the majority of people?” and never concern themselves with the quality of existence. Donovan’s point, and Nietzsche’s, is that we should look at life as artists: what will make our experience here the most intense, the most vivid, and the most worth living?

By embarking along this line of thought, Donovan touches on where the right-wing and the masculinists combine. Both groups believe that morality and civilization, through their equalizing and leveling tendencies, both adulterate our population with incompetents and also reduce life experience from a natural, organic, inequal and exciting existence to a hum-drum and dull one in which we make few important choices and as a result, feel impotent in daily life. What do we really have control over? The TPS reports? We are manic consumers and individualists because we are seeking a meaning that no longer exists for us, Donovan argues, and so we have embarked on surrogate activities that much like the relationship between pornography and sex, replace an experience with a symbol.

Cosmopolitan journalists from elite schools like Betty Friedan filled womenâ€™s imaginations with fantasies of exciting big-city careers that only a few could ever hope to attain. For every woman living that fantasy today, there are a bunch of women scanning merchandise through a checkout line at some big-box retail store, or doing repetitive data-entry in some gray office…Many of those women would probably rather be spending more time actively engaged in the lives of their children, but they no longer have the choice to stay home.

The cost of civilization is a progressive trade-off of vital existence. Itâ€™s a trade of the real for the artificial, for the convincing con, made for the promise of security and a full belly. (45)

It’s best not to be fooled by the seemingly specialized title. This book is about men, and being a man, but it’s also about “being good at being a man” and not “being a good man” as defined by the selfish desires for control and equality of others, which become the voice of civilization. However, that is the doorway to its underlying topic, which is about civilization itself. We know we can regulate ourselves into a stupefactive state of no risk, but how much should we?

Between the primal state and the neutered over-socialized state, is there a stopping point? Civilization has for centuries been headed in one direction only. Conservatives put out a hand to halt progress, but Donovan snarls and turns on progress itself, suggesting that when we let our fears rule us, we eliminate the few things that make us feel actually alive. This underlying tension makes The Way of Men a challenging and provocative read.