The New Art Right: A New Reaction For 2018 by Rachel Haywire 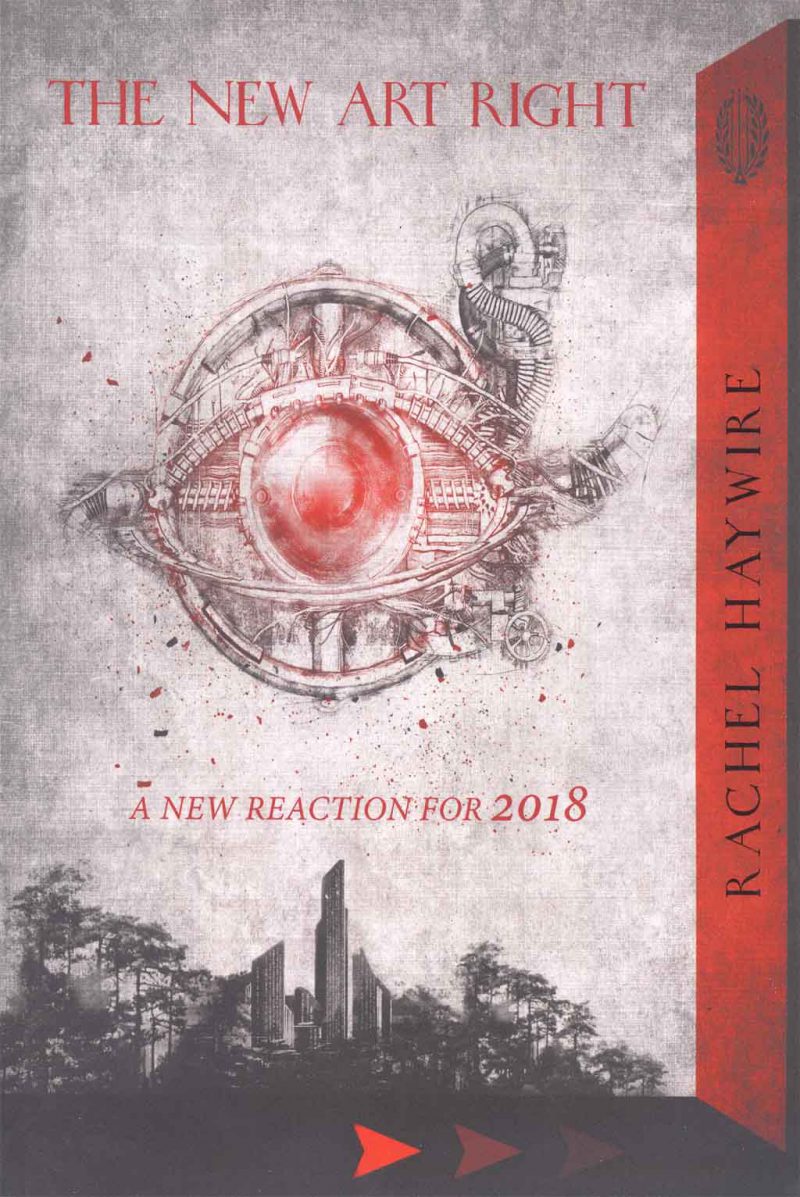 Writing in a kind of lyrical philosophy that aims to knit together widely-dispersed but related concepts more than arguing for a concrete plan, Rachel Haywire updates her The New Art Right to cover the changing cultural landscape in the years since the first edition.

Charming in its casual disregard for the sacred cows of our age, this book eschews linear prescription until its final chapter, allowing it to build up to a rewarding crash. Comprised of essays previously published and new material, the book aims to re-understand the Dissident Right.

As many may know, the art right rose in response to the commodification of the Alt Right into politics, and wanted to continue instead the sea change of cultural wave brought on by the metapolitics of the New Right and Alt Right.

Instead of trying to field a candidate, or even influence Trump, the Art Right argued, we needed to keep developing an aesthetic of adventure to the type of world we desire. Memes are not enough because they merely react to the insanity of clown world.

Haywire takes a more direct approach, which is to push aside the coulrocracy by recognizing its mundanity, and to aspire to a Nietzsche/Redbeard style spiritual elite of anti-humanist realism instead:

Leftism is rooted in new age philosophy. These people have decided that we are “manifesting negative energy” by expressing unpopular opinions. They don’t really care what our opinions are in the first place, as they are moral relativists who have no true beliefs. They are obsessed with a desire to keep everything around them negativity-free. (80)

In her view, we are not enslaved by the financial one percent, but by the cognitive 99% who are afraid of anything but a world of “kindness” and “safety.” They fear and distrust natural selection, including its human counterpart hierarchy, because it threatens them.

This group, which she identifies with prole/plebe behavior as well as the movie Idiocracy, successfully crushes the strong so that the weak may have power, and this dynamic represents the second half of a popularity struggle that Haywire describes as entropy.

In this cycle, whatever is popular loses its utility to those who follow it because it becomes commonplace, and people rush to the other extreme. She distinguishes this Hegelian view by pointing out that only the cognitive elite escape this predictable, linear behavior.

They must instead, she argues, work toward disruptive behavior while advancing toward a goal of elitism, since only then do they escape the panic-stampede cycle of the herd.

When did the atlas reverse? It is hard to come up with an exact point in time, but it is obvious that being selfish will no longer get you to the top.

Some of us feel conflicted. We are nice people who do not want to lose ourselves in the process of doing what we must to survive, but we are afraid that employers will not like us for who we truly are. We feel the need to put on an act in order to be accepted. We adapt to the will of the group in order to advance ourselves. It is not that we must step on other people to advance, but that we must be careful not to step on anyone.

This reversal of capitalism is simply a new extreme. Conforming to groupthink in order to survive in Corporate America has replaced selfishness. You may no longer need to hurt people around you to survive, but must it be necessary for you to act like a customer service representative around the clock? (31)

She calls for people to get acquainted with a natural anarchy, following the ideas of Max Stirner, in which we engage in self-directed behaviors instead of responding to the expectations of the crowd.

Stirner, much like Haywire herself, recognizes that social movements can have the same oppressive quality as governments in that both are based in groupthink, or avoiding known fears and impediments to compromise, arriving at the same lowest common denominator.

This process manifests ultimately in what she calls a Dark Bohemia, or a Nietzschean proto-ubermensch state in which people engage in brutal realism as a means of being able to see and explore possibilities of existence. That takes the book in an encouraging direction.

The New Art Right: A New Reaction For 2018 showcases the powerful writing that Haywire employs to make sense of the cultural changes which she, in the way of William Gibson, has absorbed like a sponge and re-arranged into a matrix of possibilities.

Drawing widely from theory, but not necessarily citing it as such, the book offers more possibilities than answers, returning to the fundamental theme of making sense of things and then giving them a twist to reveal the exciting options we can discover within them.

A quick read, The New Art Right: A New Reaction For 2018 makes a good point for abandoning the dutiful and political in favor of an anarchic push toward human improvement. We are trapped in a cycle of repetition, and only a cognitive elite can spring us from this prison.