The Black Swan: The Impact of the Highly Improbable by Nassim Nicholas Taleb

The Black Swan: The Impact of the Highly Improbable
by Nassim Nicholas Taleb
435 pages, Random House, $17 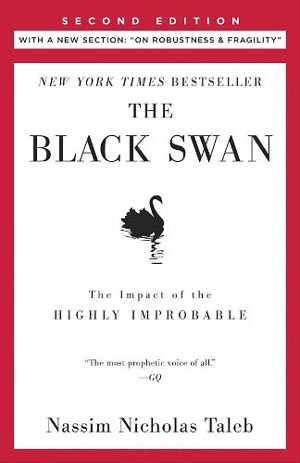 Uncertain times demand books explaining the simple overlooked principle that fixes our problems. In fact, such topics were popular in literature through the 1960s and 1970s, then during the 1980s filtered into self-help books. Two decades later, mathematically-savvy trader Nassim Nicholas Taleb wrote his ancient-philosophy-slash-modern-management manifesto, The Black Swan.

His thesis is simple: our normal mode of thought is based on our inductive observation of reality and follows mathematical distributions, while nature more fits an exponential distribution that conforms to a mathematical distribution only when observed with a certain state of mind. This, in Taleb’s view, explains our tendency to be overwhelmed by the “unpredictable” and “improbable” events that periodically crash our markets or change our history.

Taleb contrasts the “Platonicity” (although he does not refute Plato, and explicitly excepts his theory of forms) of our statistically-oriented thinking with the more postmodern, fractal-aware, power-law determined methods of those who want to anticipate “Black Swans,” or unexpected events. The poetic title comes from the historical footnote which says that until a black swan was observed in Australia, humans believed all swans were white.

Taleb also explains a meta-view of the Gaussian system:

The safety of my coffee cup illustrates how the randomness of the Gaussian is tamable by averaging. If my cup were one large particle, or acted as one, then its jumping would be a problem. But my cup is the sum of trillions of very small particles.

Casino operators understand this well, which is why they never (if they do things right) lose money. They simply do not let one gambler make a massive bet, instead preferring to have plenty of gamblers make series of bets of limited size. Gamblers may be a total of $20 million, but you needn’t worry about the casino’s health: the bets run, say, $20 on average; the casino caps the bets at a maximum that will allow the casino owners to sleep at night. So the variations in the casino’s returns are going to be ridiculously small, no matter the total gambling activity. You will not see anyone leaving the casino with $1 billion — in the lifetime of this universe.

There are many reasons to love this book. Whether you like philosophy or not, this book makes a vitally important point that no one should forget: our entire society is based on a form of knowing truth that relies on abstract models for which there is no guarantee of correlation to reality, especially as they are linear/contextless and involve objects removed from context and analyzed as the causes of themselves. This point cannot be underscored enough.

In addition to the proper irreverence for the dominant illusion of modern society, Taleb targets other illusions in fields as varied as investing, medicine, science, literature and economics. His point is consistently made that people create what he calls “Platonic” models, or logically clean but context-removed mental mockups of reality, and that these are not representative. He targets causation errors, such as the infamous “correlation does not equal causation” (and takes it further to point out that direction of causation is often confused) and belief in authorities themselves as absolute causes, and debunks them handily.

Furthermore, he is a fun writer to read. He is your favorite tweed-decked professor, opining with an extensive store of information that is equal part arcane philosophical reference, contemporary science and math, and personal anecdote (which, if used correctly to demonstrate a principle in action, can be quite effective). Unlike most of the intersection between self-help and investment advice which bounces across our eyes like an aerobics instructor, this book is human and moves at a varied pace, making its points through text that is comfortably on the edge of rambling without ever losing direction.

That being said, this book has two major flaws. The first is easy: the editor was too gracious and not harsh enough. If Maxwell Perkins had been handed this book, he would have handed it back a week later 200 pages shorter, and we would have missed nothing. Taleb’s information is good; his prose is fluid; however, it is inefficient and as a result, we can lose track of the point. If this book were re-created as a 175-page tome, it would be a rollercoaster of excitement. As it is, readers will skim.

The second point addresses Taleb’s thesis. We can accept that the Gaussian model is insufficient, and that fractal, power law and exponential models better fit the type of systems we are studying. But ultimately there must be a reason for this disconnect. Taleb alludes to, but does not articulate, the location of this error in the human tendency toward narcissism and thus, the linearization of measurement in the creation of abstract models. In this he seems to misplace blame on poor Plato. He also despite talking extensively about fractals does not analyze many other ideas from “chaos theory” in depth. For example, does a Gaussian measurement in an epicyclic pattern produce an exponential result? Are the Gaussian patterns inaccurate because they are applied to the wrong single factor, presumed to be causal, in a complex situation? The extra 200 pages could go a long way here.

We, members of the human variety of primates, have a hunger for rules because we need to reduce the dimension of matters so they can get into our heads. Or, rather, sadly, so we can squeeze them into our heads. The more random information is, the greater the dimensionality, and thus the more difficult to summarize. The more you summarize, the more order you put in, the less randomness. Hence the same condition that makes us simplify pushes us to think that the world is less random than it actually is. (69)

Nobody writes books like this anymore. To tackle a fundamental aspect of human being, abstract it to multiple levels of the individual and society, and then propose an alternate — this is a tactic of literature from millennia bygone. It is also the only kind of strategy that is valid anymore, since mucking about in the details means arguing over the minute boundaries of someone else’s definition. Taleb writes like an ancient writer, with similar reverence for the knowledge that has endured ages and specifically, the nearly forgotten twists of powerful ancient thinkers who never made it to mass popularity.

While much of this book will remain contentious, it is an important work because it slices past assumption and forces a re-analysis of our underlying beliefs about how reality is constructed. In a time when we seem to be swatting at heads of a Hydra, this is a sensible approach, and Taleb’s measured but enthusiastic exploration makes The Black Swan an enjoyable, albeit spacious, read.

Conservation and Conservatism | Change your life