The Alternative Of Real Ecology by Kveldulf Gunnar Larsson (2016) 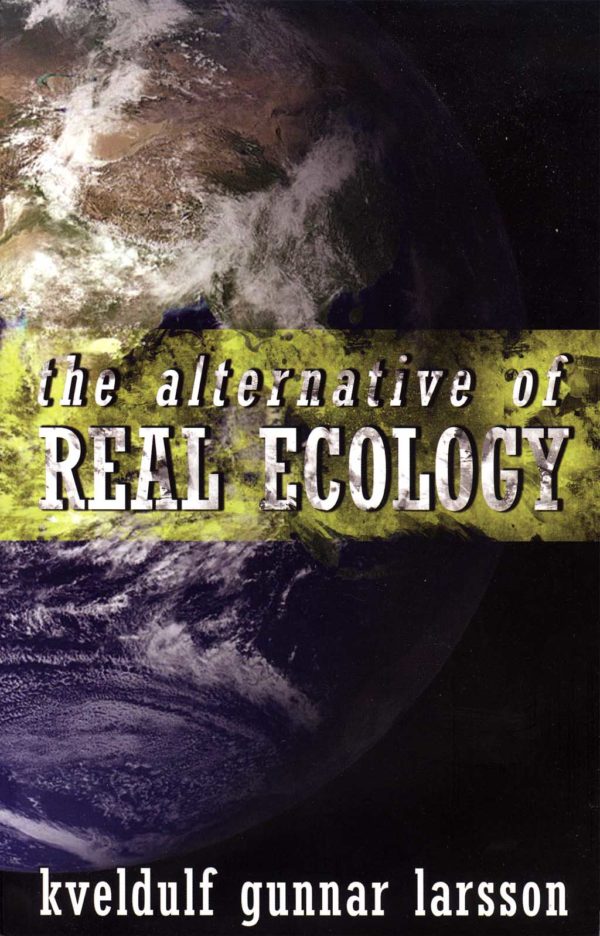 When contemplating the environmental crisis dawning over our world, the thinking individual faces a grim choice: to admit the truth is to call for the taboo, such as fewer people, but to fail to admit the truth is to dedicate oneself to endless compensatory behaviors that will never fix the problem. This is why nothing has been done despite most in the West wanting a solution for decades.

The Alternative of Real Ecology offers a solution in the form of descending into the fullness of admitting the truth about the collision between humanity and our environment. Human needs are in conflict with the needs of natural ecosystems, and this is a zero-sum game, which means that anything we give to humans, we take from nature. At this point the debate takes on a mature outlook: we must talk about the appropriate number of humans on the planet in order for enough of nature to thrive that our planetary ecosystem can function without losing species.

That recognition admits two types of response. Either we as a species change what we are doing, which is impossible under liberal democratic political systems, or individuals are left with the question of how to address the environmental crisis through individual choices, knowing that the vast majority of humans will not do the same. This book uses a discussion of the latter to explore the changes that would have to be made in the former scenario.

Uncontrolled human breeding demands more space for growing food, housing, and recreation; unless the population growth is controlled the loss of habitat will increase. “Humans have the right to breed and grow food.” Yes they do, and therefore the biodiversity will be exterminated. They can breed as much as they want and eat/throw away a much food as they want. In other words: “Humans can take away as much natural habitat as they see fit.” (231)

In noting this, this book follows up on the ideas of Pentti Linkola and Theodore Kacyznski, who noted that only non-democratic solutions are serious. If we want to preserve nature, we have to limit the amount of land used by humanity, probably to a quarter or third of the available land, and to do that, we need a political system that is not based on individual rights which cause a tragedy of the commons as each person exploits the maximum amount of resources (which increased land use) possible.

The style of The Alternative of Real Ecology might put people off at first, but win them over as the pages turn. Somewhere between a Socratic dialogue and a notebook of ideas, the text flows like a conversation between quotations representing either common arguments against environmentalism or statements by public figures, and the rebuttals of the author. A mood of negation of pervades the text as it points out hollow platitudes and nonsensical objections to the obvious.

At its core, this book suggests that normal (modern) human life and environmental survival are opposites, and so humans must become “inhuman” or conditioned to assign no additional weight to human preferences. In this mindset, we are able to separate what we need from what we want; at that point, the solutions to overpopulation, overconsumption and other human ills become obvious. The author sets a mindset of “no contribution” more as a thought experiment and baseline than recommendation, but comparison to it reveals how impoverished our “green” actions have been.

…The priority of Real Ecology is Nature and the duty to point out that it will be destroyed. Not how much the existence of humans will be miserable. It is not the duty of Real Ecology to stop the ecocide. That’s impossible. It’s there to stop destroying Nature by one person at a time: the inner change and non-contribution. (92)

By forcing the issue and pointing out that, without radical species-wide change, ecocide is inevitable, The Alternative of Real Ecology enacts a certain kind of inner change in the human being, which is the framing of the environmental issue in appropriately binary terms. Either the human species gets its act together in a large way and reduces its land use, or we watch the inevitable tragedy.

In this way, the book acts like any form of radical realism. It identifies causes, and looks to their effects, and illustrates for us the choices we have regarding the inevitability of those effects. Its “inhuman” outlook separates us from illusion, and opens the dialogue to a results-oriented conception of environmentalism. In turn, this pushes the human dialogue on the environment past the socially-acceptable to the realistic.

Of the two solutions it identifies — inner change and non-contribution — the former proves the most interesting in that it is a fulfillment of the deep ecology notion of re-designing human life to fit within our natural environment, instead of making the environment subject to human whims, to be shaped in order to serve what our herd think believes is what we need. Larsson makes the whole book an exercise in understanding the depth of this reorganization of our minds and desires, both in nuance of the big points and associated details, forming a list of often-forgotten important environmental concerns.

However, he remains suitably bleak, pointing out that the bottom line cannot be adulterated: we have too many humans and each of them, if they can, will live a high-resource industrialized lifestyle; implicated in this also is the notion that our social mobility causes us to compete through money and possessions, which further drives the consumerist mania that is consuming our environment.

Real Ecology doesn’t deal with solutions. No matter how unpopular or controversial, they are ‘solutions’ and their presentation is all it takes 1) non-realistic: the sudden disappearance/vanishing of the human species. That’s not possible to achieve, so only a theory, 2) partly realistic: suicide. To sacrifice yourself for Nature, and 3) realistic: not having children. The non-contribution. Rather than promoting (Real Ecology doesn’t promote them) these ‘solutions,’ it’s better to present the realistic ones: non-contribution and inner change. Real Ecology will not promote a fantasy, theoretical solution, non-realistic ideas. That’s what realism (real) is about. (111)

It remains unclear how literal this is, since the Darwinian effect of the environmentally-conscious not having children is that environmental consciousness as a trait disappears from the human species. The inner change, however, is wrought in this book through many clever mental puzzles of the variety above, in which a distinction is made between arbitrary but true propositions that are thus unproven or irrelevant, and ultimate solutions which are too extreme. By shifting the Overton window of ecology in this way, Larsson channels our own instinct to look for a moderate center point, which is a change in attitudes toward things previously considered to be universal goods, like the economy or human rights.

This book challenges the reader with surly, often malevolently defeatist thought-problems of this nature. Its largest point is that ecocide is not a forgivable sin, and that for as much as it rages about how no solution can be found, clearly the basis of a solution — fewer people, less consumption, more social order — informs our thinking not about environmental issues per se but general issues, with us naturally wanting to ask, “Will this improve or worsen the condition of our world?”

Printed on recycled paper, The Alternative of Real Ecology taunts and mocks us for our impotence on this issue and seeks to re-frame the environmental question as the question of what type of civilization we will choose for our future, knowing that ecocide not just terminates us, but rebukes the gift of life and will make us guilt-ridden and self-hating. A quick read, it is emotionally provocative and thought-provoking as a result of that, pleasantly separating it from the self-help nature of most “green” books.

Rejecting The Enlightenment™ | We Have Been Fighting The Wrong Enemy