Runes And The Origins Of Writing by Alain de Benoist (2018) 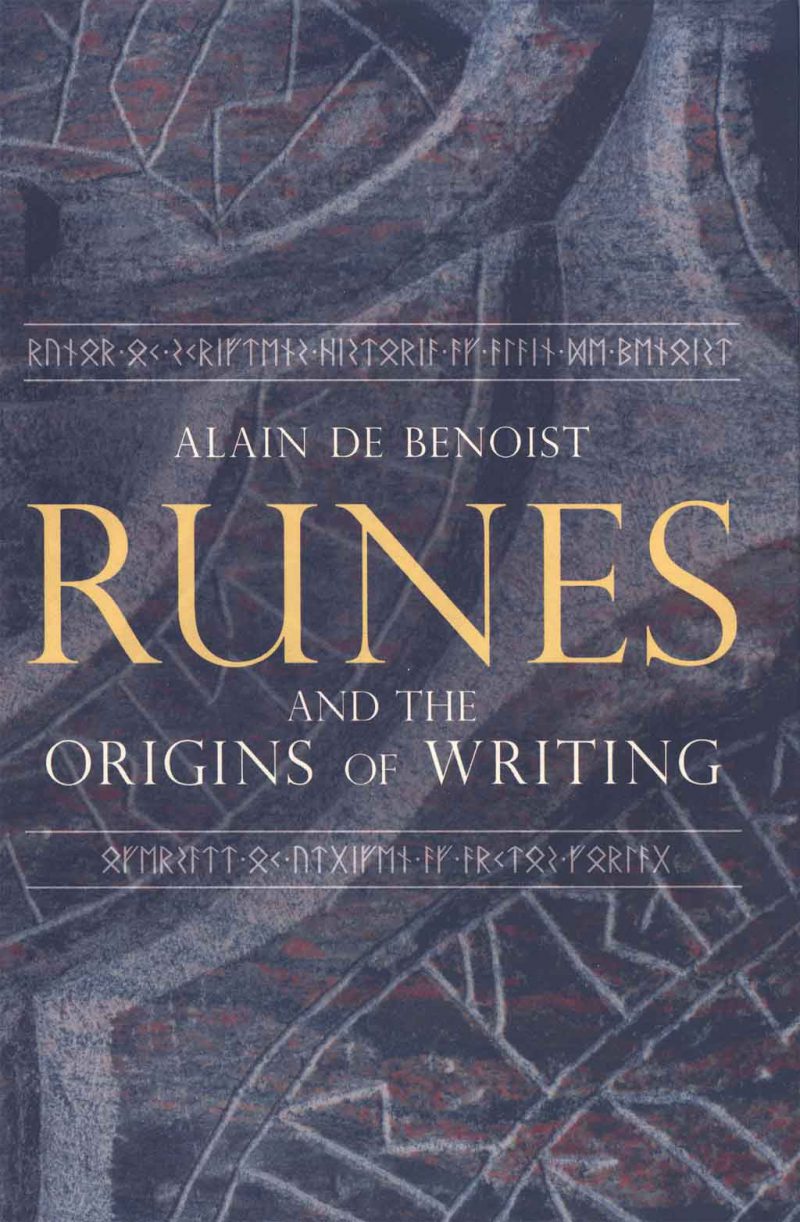 As always with anything from the core writers of the New Right such as Alain de Benoist, a new book brings great excitement because it offers the possibility of new directions in which to expand the rippling wave of cultural change which is transforming the West not into the past but a post-Leftist future.

Without a doubt, Runes And The Origins Of Writing fails to disappoint, and in fact opens up a new front for looking into the history of Europeans and the mystical links between practice and metaphysics that seem to be a hallmark of Indo-European philosophy and its pagan religions.

de Benoist writes in a fluid, easily-readable style that includes a high degree of rhetorical devices designed to open up areas for future thinking, making the book seem like a Socratic dialogue composed of questions based on the interpretation of fact more than an argument from selected facts. This opens up the topic and lets it breathe.

Herodotus didn’t write that the Phoenicians invented the alphabet, as it is often believed. He just wrote that they brought it to Greece: “When settling in the country, the Phoenicians who came with Cadmus brought to the Greeks a lot of knowledge, among others, the alphabet.” Tacitus also wrote that “the Egyptians call themselves the inventors of writing and claim that it spread from them to Greece with the help of Phoenicians, because they were the masters of the sea. They took credit for inventing something they were taught (Annals, XI, 14). Diodorus Siculus was just as cautious because he only mentioned two traditions, none citing the Phoenicians as the inventors of the alphabet. According to the first tradition, the Phoenicians learned the letters of the alphabet from “Syrians,” and then shared that knowledge after having tweaked the shapes of some of them. According to the second tradition, Orpheus discovered writing by being taught by the Muses, and then spread to Greece “from the North.” It should be noted that according to the Greeks, Orpheus also invented magic. (133-134)

With this book, de Benoist attempts to trace not just the invention of writing but its purpose, which he begins by explaining as overlapping with numerology and kenning, or the use of repeated themes. For example, a letter might indicate a sound, a number, an emotion, one of the gods, and any number of contexts or general outlooks such as a warlike disposition or a contemplative one. This enabled the ancients to write highly condensed texts with a few symbols because each symbol and its position relative to others told multiple dimensions of a tale, much like stages of a ritual. As the author argues, persuasively, symbolism then was not as one-dimensional as it is now, but based on a knowledge like the Tarot or birth signs of the inter-relatedness of things, and how a position conveyed context and role. All runic writing was thus a derivation of the fundamental myths and mysteries of a culture.

Sweeping surveys of highly specific threads in history introduce each chapter, but then de Benoist begins cannily dissecting those until we get to the hint of something more, which in the great tradition of occult and traditionalist literature is not clearly stated so much as given in vector form. We know where next to explore, at least with our thoughts as well as our readings, and this sets off a journey to find the meaning behind writing before it became the mechanical symbolization of terms as it is used today.

These mysterious forays fit with the subject matter. No one knows where the runes came from, despite there being commonalities with other writing systems, or whose culture they expressed. We know that they arose in several places and as de Benoist argues, probably filtered into Southern Europe from Northern Europe, much like the fair-haired and light-eyed people who made up the ancient Greeks and Romans until the needs of empire melded together different groups. We also get the sense, hinted in the text, that for the ancients reality itself was the singular truth, but that this truth was rooted in an understanding of the patterns of reality, suggesting a numinous cause to the effect that is the world. Through this, the elaborate use of ancient alphabets not merely as components of letters but as geometrical combinations of the myths, beliefs, and customs of their peoples comes to make sense.

Delving into this, de Benoist moves with authority, but also with the awareness that his audience must take baby steps to get from the modern conception toward an understanding of the ancient; his Traditionalist leanings shine through the clearest in this book out of all that he has written. Even more, he operates like a cultural sage, uncovering mystique and fascination with a basis in fact that, as he implies, may have been interpreted narrowly to serve our modern ends, and thus despite being true, conceals a larger truth.

“In Indo-European civilizations,” writes Francois-Xavier Dillman, “magic definitely cannot be disassociated from all of the beliefs, representations, religious rites […] on the contrary, it is one of the most prevalent components, one of those that resists the most against Christianization. The same author underlines that runic writing and Germanic magic are often “one and the same.” Patrick Moisson also emphasizes that there is a fine line between magic and religion, but he notes that whereas religion seeks to conciliate divinities with sacrifice and worship, magic “constrains divine powers with appropriate rites,” which assumes the existence of impersonal forces and “means to constrain the supernatural world.” (69)

For Traditionalists, ancient societies represented a type of integration: different specializations — philosophy, religion, leadership — were not competing and disunited, but separate doorways into the same understanding of an order, both physical and divine, that pervades all existence with its pattern language. This is different from the modern view, which is that all interpretations are equal, and instead addresses the fact that while interpretations are varied, they attempt to describe the same thing, and their conclusions repeatedly identify some timeless truths of existence which are more important to us than “new” ideas. This integration of ancient societies allowed writing to have a ritual significance, and it is in this thread of understanding that de Benoist explores the secret of the runes.

A lively chase follows, using the words of people from wildly disparate disciplines and from a wide range of places to look into the nature of ancient writing and how it has significance for us now as we try to navigate the chaotic world of modern expression. As often happens, these data points present a silhouette which enables us to better understand ourselves and a different view of metaphysics that exists in unison with nature and the wisdom of the ages regarding the order of man. On this quest, de Benoist completes a tour de force which will make good reading for any thoughtful person looking for philosophical pathways around the modern mental quagmire.

A Loss Of Faith | How The South Won The Civil War