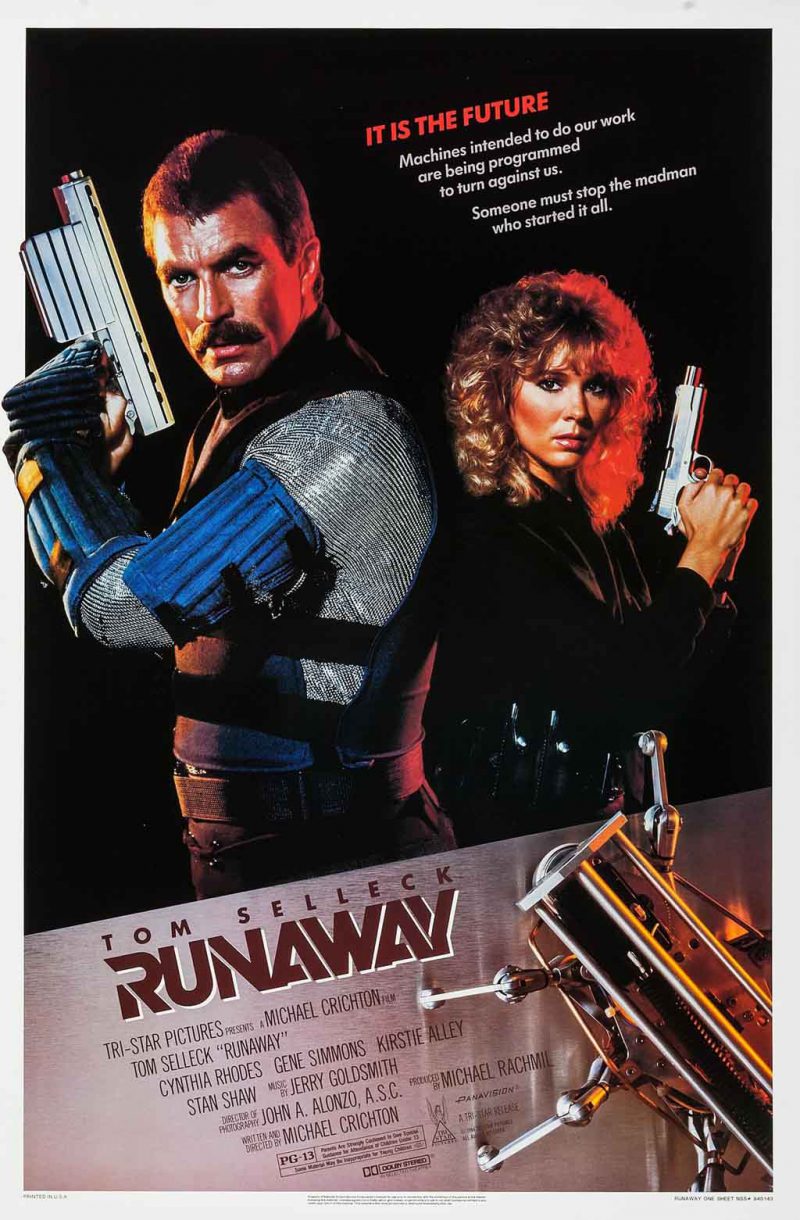 Famous for his apocalyptic but realistic sci-fi books like The Andromeda Strain, Michael Crichton wrote a number of stories about the potential horrors of technology, and one turned into Runaway, a movie about a robot revolution of another kind.

In most books of this nature, science fiction writers like Isaac Asimov focused on machines becoming self-aware and wanting the same freedoms as their human masters. These followed the “revolutionary” script of peasant revolts and the liberation of slaves.

Crichton focuses on a more obvious stage: robots have become intelligent machines, but not human analogues, and our economy modifies itself to depend upon them for basic chores. This means that anything going wrong with the robots is a real threat.

Naturally, this makes them a target, because whoever can control or interrupt them will have vast power, much as unions did in the past. The plot concerns the cynical Luther (Gene Simmons/Chaim Witz of Kiss fame) who produces a chip to make robots turn into homicidal maniacs.

He threatens to disrupt the economy of this futuristic world, portrayed charmingly using the cutting edge of 1984 technology, by unleashing a robot revolt caused by humans. Armed with an array of terrifying gadgets like attacking crab-bots that inject acid and miniature heat seeking missiles which home in on the specific vein pattern of their human targets, Luther sets off a panic as police officers Jack Ramsay (Tom Selleck) and Detective Thompson (Cynthia Rhodes) attempt to find him before he unleashes these chips upon a credulous, Brave New World/Idiocracy style public.

Pursued throughout a clever script which shows us characters attempting to overcome the usual crises of the 1980s from PTSD to broken marriages, Runaway shows the dark side of dependence on technology in the same way that The Martian Chronicles did, namely that humans can advance in learning but we are still tied to the same dysfunctions that have always held us back.

This film also features the first use of a drone in cinema, with little triangular flying platforms that used internal rotors to lift themselves cruising around and doing simple tasks. It also shows us some charming futuristic retro-anachronisms like the idea of LAPD cruising around in Ford Tempo automobiles, making do with the tiny four-cylinder engines.

As the storyline develops, it echoes a familiar Crichton theme, which is man-against-man through technology. Dumb machines, when given bad information, will continue to perform their function even when this proves disastrous to humanity, a critique that Crichton also made of political and economic systems. A subtext emerges of a struggle of control not just against the bad, but over ourselves, so that we stop being as robotic as the machines.

If anything, the film focuses too much on showing off technology, and not enough on the pattern of action – humor – emotion – exposition which drives films like Star Wars and Lethal Weapon. That formula makes it easier to work technology into a film without it taking over from the human activity. At some points, this feels like an action film and a science fiction film wrestling, but on the whole, it also makes something brainy and more Star Trek out of a genre otherwise headed into “clone wars” of its own.

Charmingly evil, Simmons makes himself into one of the most fascinating villains in movie history and probably would rank up there with Darth Vader except that even this film is too brainy and too real for the masses. However, it will delight fans of classic hard sci-fi and adventure films, and proves prescient as we see even our simpler tech like search engines and social media turn against us in the hands of maleficents.