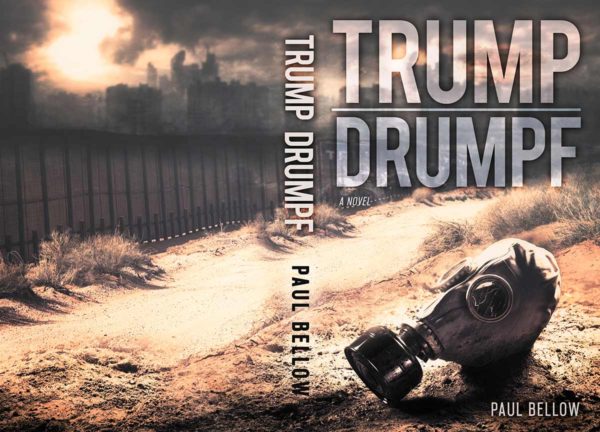 As Western civilization winds down into the muddle of its own paradoxical goals, the time is right to satirize the deeply internalized dysfunction that has become accepted as the norm. Taking his position on the firing line, author Paul Bellow plans to release Trump/Drumpf, a satirical sci-fi novella about a future Trump presidency. We were lucky to get in a few words with the author…

Who are you, what have you written in the past, what else do you do, and why should we read you?

Who am I? Such an existential question! In all seriousness, I am a poet and writer. My first “book” was published in the fourth grade. I’m a product of the public and private education system in America.

As to why anyone should take a chance reading me, I believe I have an important message buried within my candy-coated political satire, one that should be heeded.

Trump Drumpf is a comedic sci-fi satire novel meant to shake and wake Americans before it’s too late. If you peel away the layers, there’s a message hidden somewhere in the book.

With the attention-span of American citizens at an all time low, I tried to create a short novel that looks at various topics while still being entertaining. At the most basic level, Trump Drumpf is a novel about change. And, perhaps, a warning of what the future might hold.

Do you support or dislike Donald Trump as a candidate for President? If dislike, who would you rather have in his place?

I neither support nor dislike Donald Trump as a candidate for President. In my opinion, Mr. Trump is a symptom of what’s wrong with America. As to whether he wants to be King of America, that’s covered in the book too.

Likely. Who knows where the world is headed. Taco Bell might indeed end up owning every other corporation. A new Dark Age is a possibility. If you look at the collapse of the Roman Empire, you can find many similarities.

The Facebook algorithm is actually one of the main characters of Trump Drumpf. In many ways, they might be considered the villain or anti-hero. I played with the notions of hero quite a bit in this book.

This theme — corporations taking control after government fails — seems to run like a thread through much of Sci-Fi of the 1980s through the present. Why do you think this is a topic of interest?

If I had to guess, I would say it it due to the same reasons speculative fiction – aka sci-fi – has been so popular since its inception in the 17th century. (See: The Chemical Wedding…) Perhaps it has to do with the comforting idea of experiencing a world that might be better (utopian) or ones that are worse than what we have now? (See also: Wired for Story…)

Personally, science-fiction has always been primarily a means of escape. With that said, many of my world views and the ability to challenge, question and dream of something better all come from reading Sci-Fi classics from the mid-20th century onward.

When can we expect the book, and how should we stay tuned in for updates?

Soon. In another day or two most likely. The best way to keep in the loop is to subscribe to my newsletter. You can find it at http://PaulBellow.com