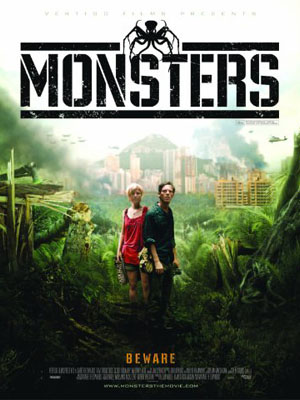 Millennials are in a bubble of their own creation. Others watch them, but don’t communicate, because we know the bubble is there and are aware we will be attacking with anger for puncturing it. We can tell that they are the products of decades of leftist indoctrination, broken homes, commercial “culture,” and the legitimization of selfishness in politics.

As if on cue, they make a movie that demonstrates the millennial mindset: a group of people who have grown up with only one mode of discourse, which is social. Millennials understand the world as a process by which they express emotions, and this convinces other people to do things for them. They have no frame of reference outside of a society based on facilitating the feelings, judgments and desires of its population.

Monsters starts with an interesting premise. In this world, NASA sends a probe to Europa to gather samples. On its return, the probe breaks up over Mexico. At this point, a wide band of northern Mexico is infected with the spores of these aliens, which grow parasitically on trees and then mature as demonic-looking, Chthulhu-inspired half-crab half-octopus creatures fifteen stories tall.

It would be hard to go wrong with such a formula. Alas, Monsters does. First, the filmmakers fundamentally misgauge the story. It involves a photographer trying to escort his boss’ daughter out of the danger zone and into safety in boring, humdrum, meaningless suburban America, where she is set to marry someone she speaks of very little. In theory, this would be a story where the characters do the following:

For all of this great screen-time potential, the directors and writer raise a white flag. None of those topics get touched, except in passing as a dialogue gloss. We never see any of them happen. In fact, the movie ends with the same lack of direction it began with, having taken us through an hour and a half of lack of direction. Its characters literally float in stasis, imprisoned by their lack of affect to anything meaningful in life.

Of course, like the modern society that produced them, the millennial characters are full of emotion. They spend most of the movie having emotional reactions, taking dramatic pauses, creating drama — “emotional gestures which have no resolution, because their goal is to make the individual feel important” — and acting out their own lack of ability to think on the people around them. But this is surface emotion, on the level of self-pity or self-promotion, and doesn’t reveal anything of their souls, if they have them.

As said above, millennials act through one single focus: socialization. They expect to have emotions, and to use those emotions as a justification for “need,” and to have society meet those needs because, hey, it’s the social thing to do. Naturally, it would be fascinating to see a story of someone growing out of that state because they had to get their act together to evade or defeat marauding aliens, but the directors missed that one.

Probably the best thing about this movie is its extensive use of CGI for things other than the aliens. We expect the aliens and military vehicles to be CGI; however, the directors fake wrecked vehicles, destroyed buildings, ruined landscapes and even street signs with their CGI software. This means less of a mess was made, and with luck all movies will do this in the future, because it’s “close enough” as in only 2% removed from the real thing.

The creeping hand of power | The origin of conservatism