Metaphysics of War: Battle Victory and Death in the World of Tradition by Julius Evola

Metaphysics of War: Battle Victory and Death in the World of Tradition
by Julius Evola
150 pages, Arktos, $19 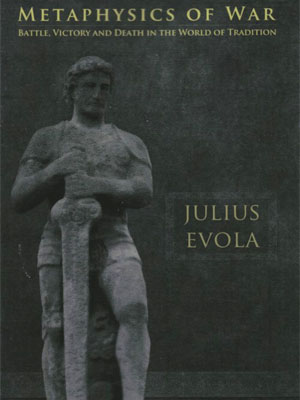 The more radically different that a philosophy is from the dominant paradigm of its age, the more difficult it is to find an entry point. Long detailed explanations lose the reader, and short summaries facilitate assimilation as readers confuse simplicity with being a variant of existing ideas.

For this and other reasons, Metaphysics of War: Battle Victory and Death in the World of Tradition serves as an excellent introduction to the world of Traditionalist philosophy. Comprised of short essays written before and during the second world war, this book limits its topic area and thus is able to extract the essence of traditionalism by comparing modern and traditional approaches to the same topic. As a result, it is an introduction with depth that does not get buried in a breadth of detail.

For those who are unacquainted with traditionalism, it is a philosophy that emerged from the Nietzschean revolution against the modern idea of deriving truth from material and social means in the wake of the French Revolution. Where a modernist looks toward physical reality as the guiding order of events, a traditionalist sees in physicality reality a manifestation of a larger order that is “esoteric” or revealing of itself with study, time and ability. Traditionalism is inherently anti-egalitarian but even more importantly, it rejects the ideas of universality and materialism, positing instead a worldview where the order of mentation and the order of material are united through a similar pattern originating in the divinity of existence itself.

As a philosophical strategy, traditionalism seeks to avoid “negating a negation” (83) that took place when liberalism, in a desire to enforce the equality of all people, negated qualitative and subjective experience in favor of one that can be shared among a vast crowd. The negation of liberalism reduces life from an experience of meaning through interaction in the physical world, to an attempt to find meaning arising from the physicality of the world. The result is an order devoid of mystery and reverence, in which events appear random and meaningless as their own goals are changes in materiality. In Evola’s concept, life and battle alike are fundamentally experiences, with the physical component seen as being contingent upon the convergence of metaphysical and physical order.

In this conception every victory had a mystical side in the most objective sense of the term: in the victor, the chief, the imperator, applauded on the battlefield, was sensed the momentary manifestation of a divine force, which transfigured and trans-humanised him. (127)

Battle and combat turn out to be appropriate metaphors for the complex world of esoteric thought that Evola unleashed upon us. Much as in the modern movie Apocalypse Now, war is the setting in which the drama of the human heart plays, and he differentiates between the pacifistic, negative and materialistic modern spirit, which prizes nothing more than safety and hedonism, and the ancient spirit which sees victory itself as a spiritual and emotional goal worth attaining. Contrary to what many people may think of the title, Evola does not glorify war for war’s sake; he glorifies the struggle for mental clarity and self-discipline as it appears in war. (He might as well have used guitar playing as his metaphor, or mountain climbing as in other Evola works.)

Central to understanding this idea is the division between “greater jihad” and “lesser jihad.” Evola sees tradition as a body of esoteric knowledge derived from observation of the universe itself, and thus appearing in the individual traditions of many cultures. He draws from the post-Persian Islamic tradition with the question of jihad, or religiously-sanctioned war. In this tradition, the “greater” jihad is the struggle for self-composure, discipline, clarity and awareness; the lesser jihad is the battle itself (80). Where a modern would see the mental state as the means to the battle, traditionalists see the battle as the means of refining the mental state, and the mental state and its metaphysical implications as being the ultimate goal.

While Evola is a fluid and expressive writer, like many people of great knowledge he tends to wander, and so having him constrained by (a) shorter essays and (b) the topic of war and warriors has kept this book very clear in its definitions. What it is not is an exoteric paint-by-numbers understanding of traditionalism so that any person who lays hands on this book can begin adopting traditionalism in order to impregnate it with their own ideals, and thus assimilate it in reverse and change it to be yet another modern philosophy. His most useful topic in these essays is perhaps not conflict but the difference between traditional thinking which unites matter and (Platonic) form, and modern thinking, which sees the two as one and the same as defined by matter.

According to the traditional view, man as such is not reducible to purely biological, instinctive, hereditary, naturalistic determinisms; if all this has its part, which is wrongly neglected by a spiritualism of dubious value, the fact still remains that man distinguishes himself from the animal insofar as he participates also in a super-natural, super-biological element, solely in accordance with which he can be free and be himself.

Generally, these two aspects of the human being are not necessarily in contradiction with one another. Although it obeys its own laws, which must be respected, that which in man is ‘nature’ allows itself to be the organ and instrument of expression and action of that in him which is more than ‘nature.’ (66)

Evola sees a contrast between a spirit which attaches itself to a purely individual and earthly human life (133) and the traditional view, in which “fulfillment” through risking the loss of life is the only meaning, in contrast to a long and safe life under the guaranteed easy living of a modern consumerist liberal democracy (138). His point is that by focusing on the tangible, and not meaning, we have become perpetual surface-dwellers who are afraid to explore any of the things that might give our lives meaning.

This book is an excellent introduction to not only Evola, but traditionalism, and through it, the basis of any alternative to modernity. We either pick meaning or materiality, and work backward from the one we picked to the other; if we use meaning as our goal, we perform a traditional conservative ends-over-means analysis that results in reverence for nature, spirit and beauty over individualism. That gets us around the problem of modern society, which is that individualism leads to narcissism and selfishness, causing internal division and corruption of all meaning, which makes people miserable and hostile. This clarity of message makes Metaphysics of War: Battle Victory and Death in the World of Tradition another powerful resource from Arktos. True to form for that publisher, the editing on this book is impeccable, the footnotes detailed, the layout brilliant and the introduction edifying without being a “Traditionalism for Dummies” or another crass modern device.

What is interesting about this book is the wide applicability of it as a form of esoteric knowledge in itself. Its wisdom clearly applies to battle, but just as easily toward the daily moral questions which no matter how small present themselves to us, and define our character to our watching egos, which in turn programs us to behave more like what we see in ourselves as a result. Even secularists can appreciate this book because at its core, its metaphysical aspects are as much metaphor as literality, and reference our need for a larger order to life than the immediate demands of any given task.

Even as our time appears to be heading toward a great abyss in preparation for shedding its old skin in rebirth, the words of Julius Evola bring hope for courage to those who might despair of modernity. His point is a golden one: above all else, the order of disciplined thinking and the experience of acting in a morally higher order, present to us a meaningful life. While modernity can destroy all that it can reach, it cannot touch this, and with this book the heroic spirit lives on to re-conquer and re-make a ruined world.