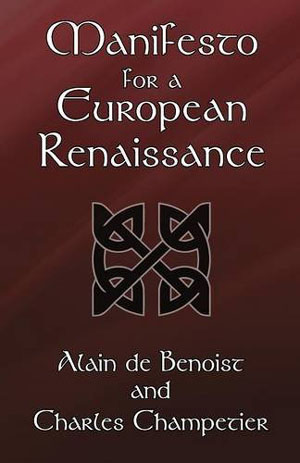 The problem with ideas is that we recognize what we know, but the unknown takes a long time to understand. Believing that quantity over quality will help us, we often demand “facts” and “examples” as a knee-jerk response to hide our confusion.

With the New Right, little is known. The name is not even “official,” having been bestowed on the group — a ragtag band of fiercely independent, mostly French, writers — by journalists. They are not a political movement, but a cultural one. And so they are rarely understood.

Even more baffling is that a fairly large degree of confusion exists within the people who make up the New Right, and their fans, to the extent that an outsider might be correctly puzzled. To clarify much of this, Alain de Benoist and Charles Champetier unleash a pure manifesto.

Like all good manifestos, this is not an attempt to “prove” something to you by linear logic. It is an explanation of a thought-system in which all the parts relate to one another, so there’s no point doing anything but reading it all and seeing if it seems like a reasonable solution even if in a fuzzy, hazy and poetic way.

The answer is that it does, but nothing in life is perfect (including perfection: a dead ideal) and so there are some glitches in the reasoning, perhaps. Perhaps. What is clear is that there are no glitches in the writing, which features not only the erudite pens of the authors but the steely-eyed detail-conscious and systematic editing of John Morgan and the windswept minimalistic layout art of Daniel Friberg.

de Benoist and Champetier make a good case for this belief because they’ve purged the extremism from the right, incorporated a lot of familiar leftist rhetoric, and explained it all in a goal-oriented non-reactionary manner.

Where they go too far is incorporating the leftist attitudes too clearly. These are attitudes that are standards of behavior, but can easily distract from the actual goal, which must also exist. They have admirably avoided the usual pitfalls and rage of the right, describing instead of what they don’t like, what they do like.

Their essential theory is that the modern West is heading for oblivion because it has replaced culture with commerce, and thanks to the consumer nature of modern democracy, few are speaking out because it’s unprofitable and they could end up social rejects. The solution, the authors claim, is something called “metapolitics,” which is basically a cultural wave achieving Nietzsche’s re-evaluation of all values, and thus indirectly influencing politics.

In their view, our tendency to rely on “ideological” constructs instead of naturalistic knowledge and culture has led us away from reality and into a world composed of human symbols and desires.

The destruction of the life-world for the benefit of instrumental reason, (economic) growth, and material development have resulted in an unprecedented impoverishment of the spirit, and the generalization of anxiety related to living in an always uncertain present, in a world deprived both of the past and the future. Thus, modernity has given birth to the most empty civilization mankind has ever known: the language of advertising has become the paradigm of all social discourse; the primacy of money has imposed the omnipresence of commodities; man has been transformed into an object of exchange in a context of mean hedonism; technology has ensnared the life-world in a network of rationalism — a world replete with delinquency, violence, and incivility, in which man is at war with himself and against all, i.e., an unreal world of drugs, virtual reality and media-hyped sports, in which the countryside is abandoned for unlivable suburbs and monstrous megalopolises, and where the solitary individual merges into an anonymous and hostile crowd, while traditional social, political, cultural or religious mediations become increasingly uncertain and undifferentiated. (13)

To my mind, this lengthy paragraph encompasses the essential message of the New Right: the modern world is hell, and we made it so by relying on the tools that justified good-sounding options like “freedom” and “equality,” but like all good intentions, these have opened a pathway to the abyss.

Their point is well-taken that it’s impossible to oppose any of this if you take each point separately. You have to connect the dots, and then oppose the whole thing. As they point out elsewhere, the 20th century is a graveyard of ideologies who tried to be anti-modern but were too infested with its assumptions, and thus dragged themselves into the same oblivion as that which they were fighting against.

Some of those assumptions live on in this text, particularly its adoption of social subsidies and open discourse as goals in themselves. There’s also a hint of the idea of a unified Europe including Eurasia which makes historians queasy, much in the same way Ron Paul’s idealistic isolationism hit many people’s unreasonableness filter. These are small glitches, things that will in the future be worked out as more of these situations unravel to reveal their core.

What makes this book compelling is that it targets the whole of modernity as a single thing, and shows us the beginnings of a new language for discussing politics, in which values like culture, nature and existential experience have a voice. That in itself is a profound change, a re-ordering of civilization itself on par with the deep ecology movement’s manifesto in that it asks us first and foremost to re-order our values, and lets the inevitable unfold from that.

Industrial capitalism has been gradually overtaken by a financial capitalism whose goal is to realize maximum returns in the short run, all to the detriment of the condition of national economies and of the long-term interest of the people…The ubiquity of capital allows the financial markets to control politics. (42)

If a revolt against the modern world needs a mission statement, this short book provides an excellent starting point. Detractors will mention the lack of figures, charts and details, but the advantage of this format is that the whole idea can be understood at once.

We have binary choices every day in life. We can stick with inertia, or make a choice for something different. With Manifesto for a European Renaissance, de Benoist and Champetier make a good cause for a choice not just of lesser evils, but to throw out the concept that choosing any form of evil is legitimate at all.

Converting reality into a static medium | We have nothing in common