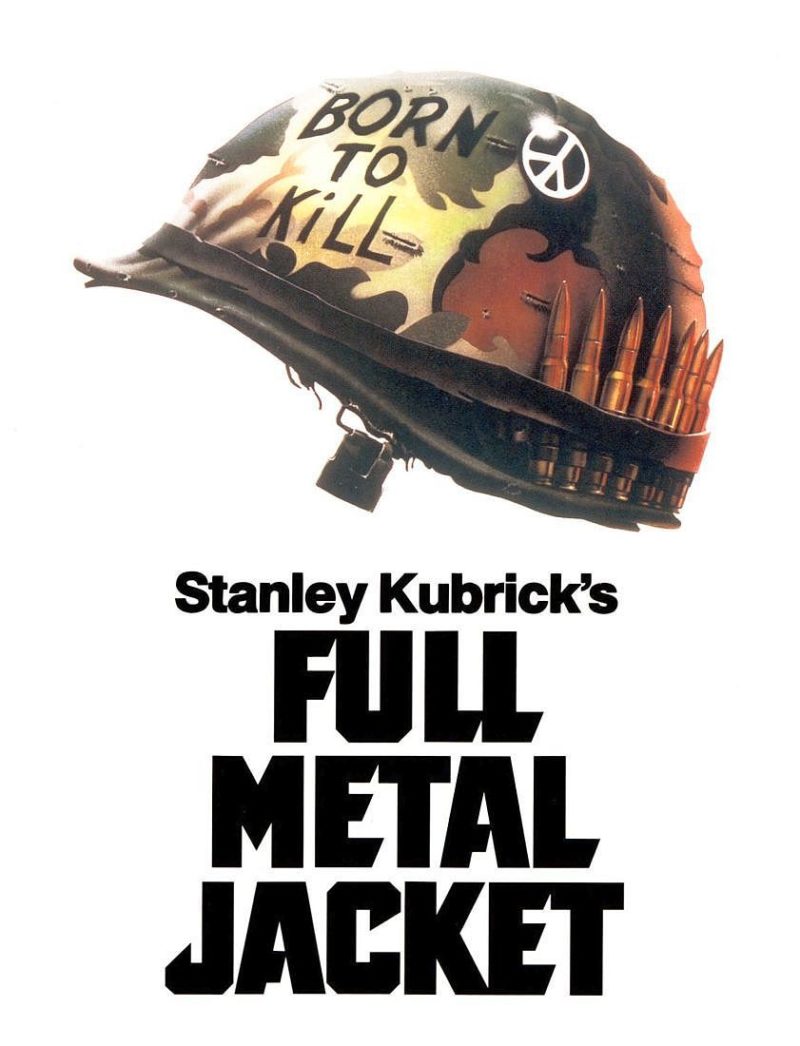 Adulthood is a great time to catch up on all the stuff you missed from childhood. When we were kids, this movie was an object of awe. When revisited as an adult, it seems transparent, disjointed, and above all else, mostly tedious. Whether this is an increase of wisdom or simply a willingness to buck herd opinion remains to be seen.

Full Metal Jacket opens with a group of young men getting their heads shaved by a military barber. This introduces Act I of the movie, all of which takes place at Parris Island, NC where the United States Marine Corps trains its new recruits.

Featuring the talents of R. Lee Ermey as a drill instructor, this early narrative provides a surface character study of “Joker” (Matthew Modine) and “Gomer” (Vincent D’Onofrio) as they struggle through boot camp. Gomer represents the downtrodden, where Joker is the independent minded studious kid who is driven to succeed.

The only thing approximating a pivotal moment occurs when Joker, who has been assigned to instruct Gomer and has done so compassionately, joins the others in a sadistic group punishment after the sadistic drill instructor implements collective punishment for the constant screwing up by Gomer. Joker confronts his inner darkness.

Naturally, everything ends somewhat badly there, so we discard all but two of those characters and move on to Act II, which follows Joker in Da Nang and Hue. As a military journalist, he is required to print lies about the war, and then must confront the reality during the Tet Offensive.

After this, he heads into the field to catch more of the “real action.” At this point the movie reveals its theme: Joker has a peace sign button on his flak jacket and “Born To Kill” written on his helmet. When prompted by a superior officer, he mouths something sophomoric about the Jungian duality of man.

In my reading, this is as deep as the movie gets: the goody two shoes kids who want to do everything right are defined by having no actual idea of what they believe. Joker is an atheist and clearly cynical about the war, but at the same time, he wants to get his kill on and is drawn to the primal side of humanity.

After this, we participate in the real focal point of the movie which is an extended combat scene in which a squad of Marines come under attack by what they believe is a substantial force of Vietcong. The only interesting character here is Cowboy (Arliss Howard), a Texan kid who wants to believe he can hack it but has no idea how to lead.

Eventually, the small tribe of Marines takes losses and confronts the enemy, who turns out to be less scary than previously imagined. Humiliated by his inability to react under fire, Joker finally gets his kill on, and then just like the movie itself, the Marines march onward in absurdity and smug comedic cynicism.

This grand combat adventure could have been interesting as an action scene, a character study, or both. Characters were given unique surface attributes, like “Animal” or “Cowboy,” but never show us the underlying motivation for how they have constructed themselves. Instead they are paper cutout men, marching on to make a plot point before disappearing.

Particularly annoying was the tendency for the characters to not follow their training and natural instinct so that the plot might drive itself onward like a locomotive trying to drag race on a dirt road. Giant plot holes result in a script that either makes no sense or wants to suggest that everyone is hollowly stupid, to great tedium for all.

Supposedly Kubrick is a legendary director, but this movie feels more like a television show. The writing has no profundity despite posturing to be so. Its only gratifying aspect is lots of interesting profanity, including gratuitous ethnic and sexual slurs, which seems to reveal more about the director than the subject.

Superb acting is wasted on this high school appropriate, mile wide and inch deep script. A movie that could have looked into the darkness and light in our souls instead becomes a hipster throwaway line at a party, much like Joker’s mumblemouthed musings on Jungian duality.