Fascism Viewed From the Right by Julius Evola

Fascism Viewed From the Right
by Julius Evola
121 pages, Arktos, $18 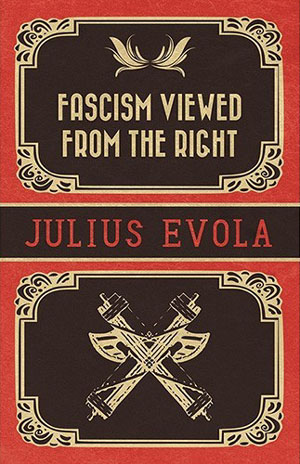 Baron Julius Evola is most known for advancing the concept of Traditionalism, or a shared belief in a cosmic order which is perceived in all ancient-style societies, building on the work of Plato, Huxley and Nietzsche. However, this viewpoint inevitably becomes political, because traditional societies are constructed outside the liberal notions of egalitarianism, and through it progress, and through that, pluralism. Traditional societies are created from unison in belief, culture, values, spirit and ideals. That overlaps to a greater degree with heritage than anything else, and this sets off the liberal air-raid siren about the inegalitarian implications of that notion.

Naturally, this squalling is reaching an end, because the 225-year experiment in liberalism is running out of money, has created total social chaos, and is becoming increasing pathological in denial of the failure of its own ideas. The once-Young Turks are now the sickened old men of the world, holding on with liver-spotted hands to the dogma they hope will control future generations in order to sentence them to the same fate the ideologues suffered. At this point, the breath of fresh air is in those who, using Traditionalism as their guide, are designing the society of the next millennium which will merge ancient tradition with ultra-modern design. Evola helped launch all of this.

Before that time, however, he spent some years as an occult writer and philosopher with an affinity for right-wing movements, and in doing so, he as an Italian in the 1930s and 1940s experienced Mussolini’s fascism, and wrote about it. The results included a small volume which is presented here for the first time in English translation with notes by translator E. Christian Kopff and the famously meticulous editing and germaine footnoting of editor John B. Morgan IV.

Fascism Viewed From the Right presents itself to an audience that its writer knew would be hostile to the topic and would have certain preconceptions about fascism dating to the propaganda of the war, which fit in the American Revolutionary paradigm of “us individualists versus the conformist totalitarians.” Much as the colonists saw themselves as rebelling against unjust taxation and rule by a distant sovereign, the Allies of WWII saw themselves as socially independent actors striking out against those who did not permit individualism to express itself fully through ideas like pluralism, internationalism, egalitarianism, social subsidy, freedom and the like.

As a result, this book is a careful analysis that resembles descent into a library of topics that grow more central as the book goes on. Evola carefully defines each aspect of the topic he writes about, and herein is the genius of the book: like an encyclopedia of political terms, it drills down to the core mechanism of each of the viewpoints it analyzes and shows how they clash with each other not just ideologically, but functionally. At the core of this book is the idea that fascism and liberal democracy aim for totally different end goals, and therefore, trying to analyze one from the perspective of another is like trying to make one rule for the sardine and the elephant.

About the principle of representation and the concept of a parliament, today we have grown accustomed to associating them exclusively with the system of absolute democracy, based on universal suffrage and the principle of one man, one vote. This basis is absurd and indicates more than anything else the individualism that, combined with the pure criterion of quantity and number, defines modern democracy. We say individualism in the bad sense, because here we are dealing with the individual as an abstract, atomistic and statistical unity, not as a ‘person,’ because the quality of a person — that is, a being that has specific dignity, a unique quality and differentiated traits — is obviously negated and offended in a system in which one vote is the equal of any other, in which the vote of a great thinker, a prince of the Church, an eminent jurist or sociologist, the commander of an army, and so on has the same weight, measured by counting votes, as the vote of an illiterate butcher’s boy, a halfwit, or the ordinary man in the street who allows himself to be influenced in public meetings, or who votes for whoever pays him. (71)

Throughout the book, Evola consistently re-frames political questions as social ones in this manner. Politics and ideology forms a vocabulary and set of notions that do not necessarily mesh with real-world consequences. For example, how many times do we say “everyone is equal” without realizing that this places the insane, homeless, sociopathic, etc. on par with our best thinkers? Equality is a political notion, but the weight of power given to each person is a practical one. Intelligently, Evola uses Fascism Viewed From the Right to re-contextualize abstract political questions as functional and practical ones.

He tackles the big points of contention, like racism and anti-Semitism, by using a similar technique which is to distill these questions down from binaries (“Are you a racist?”) to inspections of actual doctrine (“What did Mussolini mean by ‘Italians’?”). Not only does he dispel the common myth, which is that the fascist government sought to eliminate such people, but he points out what it wanted instead: the ability to integrate itself as a population, reduce social chaos and from that, forge a new type of human being to create the basis for a future society. This recontextualizes these ventures from being elimination raids to be reorganizational procedures designed to help the majority. In addition, he points out the lack of abuses in this area, especially the lack of fanatical desire to relocate or harm Jews, at least until the pact with Hitler who had more concerns in this area.

One of Evola’s more interesting assertions is that while modern liberal governments are motivated by hedonistic compulsions, the fascist society was motivated by eudemonistic ones, meaning that the goal of its individuals was to do well for the society as a whole and thus to receive reward, not simply to “earn” reward by pursuing self-interest. All of us who have watched citizens pass crimes in progress, toss litter on streets, ignore their children or other commit “little sins” might find this vision appealing. Evola ties this to the reason for fascism’s fascination with order and power by pointing out that if a mission is shared by all citizens, these things are no longer threatening but efficient.

This leads to Evola’s concept of the difference in leadership between fascist and modern states:

The state of the type that we call traditional recognised the representative principle, but in an organic context. It was a question not of representation or of individuals, but of ‘bodies,’ where individuals were significant only insofar as they were part of a differentiated unity, and each individual had a different weight and quality. As a representation of bodies, the parliament, or another analogous institution, had an undoubted value, because it embraced the interests of the nation in all their richness and diversity. Thus, along with the representative principle, the hierarchical principle was affirmed, because the merely numerical force of the groups, bodies or partial unities that had their own representatives in parliament was not taken in account, but instead their function and dignity. (73)

With turns like this, Evola is able to both thoroughly criticize the fascist society but by explaining it, reveal why it exists and where it succeeds that democracy cannot. It is rare to find such an insightful view of the function of a political idea. What we see here is more like a master mechanic explaining the blueprints of a rocket engine than the political writing that explains, in polarized terms, the dogmas and ideologies and what their “essential” traits are in contrast. Instead, we get a vision of how this society worked, and where ours by lacking the same implements is clueless to appreciate it.

All of this fits into a short book with immaculate editing from the Arktos team and a wealth of small observations on the nature of people, government and the values that compel us to act to rise above the lower standards of our time. As a critique of fascism, it is unflinching but also not apologetic; it looks to the reasons for things, not a moral judgment of them. As an investigation of modern liberal democracy, it reveals mainly the gaping holes in what the contemporary state can offer, and gives us hints to the eternal values in all of conservatism that provide a better answer.

Between Fantasy and Reality | They’re using you