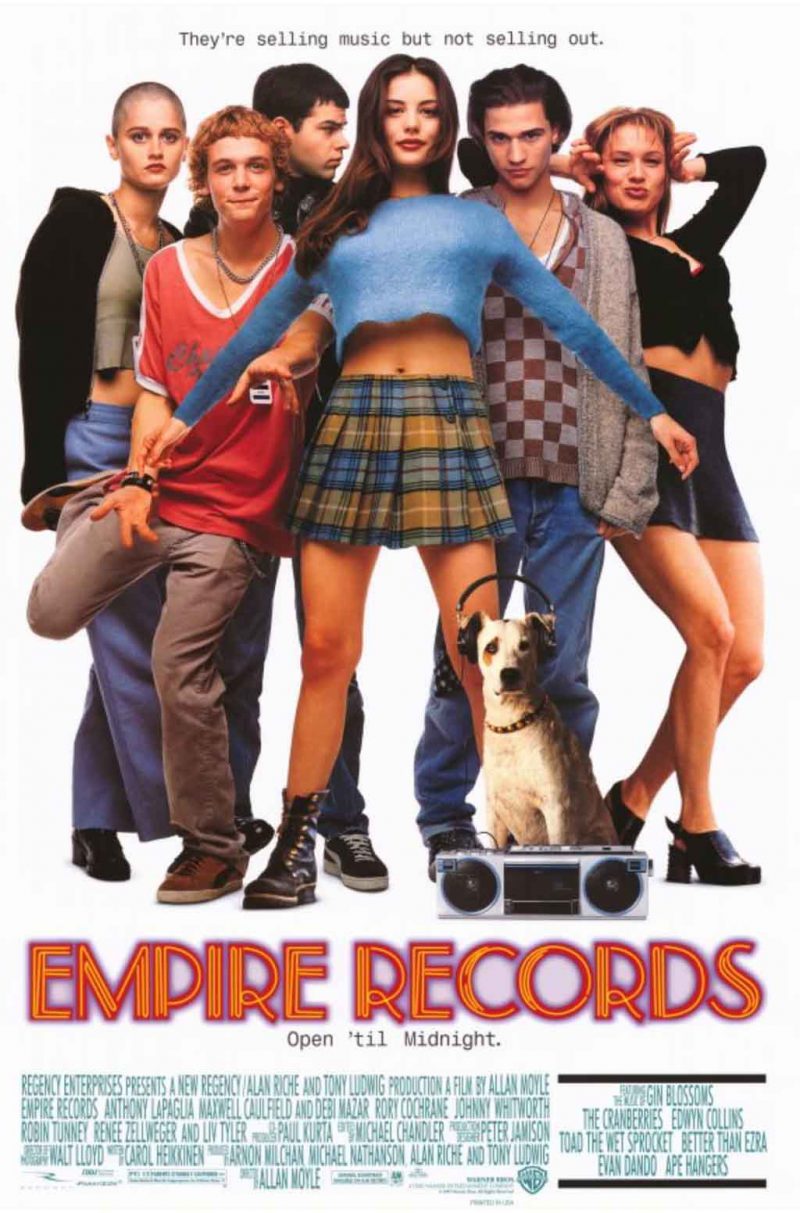 Looking back at past decades resembles looking back into earlier ages of one’s own life. While 1980s nostalgia rides high as industry tries to sell more junk to aging Generation Xers, a peek into the 1990s shows exactly the time period this generation might like to forget.

On its surface, Empire Records demonstrates every trope of the annoying hipster infection that was post-Slacker Generation X culture, but underneath, this movie serves as an elegy for an America that was already dead but still carried forward by its own momentum, a phantom attacker eyeless and heavy.

After all, America in the 1990s was under the sway of the Clintons, who had two major contributions to American culture: first, demand-side economics which emphasized marketing and novelty, and second, a habit of doing whatever was popular in order to keep the crowd pleased. These trickled down into a vapid consumer quirk culture.

In that era, it became most important to be unique, “different,” special, distinctive, and “deep.” Empire Records shows us a motley group of personalities formed almost entirely from quirks and “deep” personal tragedy and insecurities. Like a nation given to navel-gazing, the characters here live in wells of themselves and their own neuroses.

Each person must have some story behind their existence that they constantly manifest in behavior. Many actually talented actors find themselves wasted on characters that, by constantly acting out their quirks like characters in a 1980s kiddie movie, prove one-dimensional and annoying. They are enumerations of defects, not whole people.

The thin plot covers a basic crisis: the independent hipster record store which makes a ton of money but, because it hires seven quirky people instead of three reliable ones, will soon be absorbed by a large commercial chain. Its unstated premise concerns how people go to record stores for the interesting personalities, and to act out their own drama by showing how unique they are in their choice of records.

In this way, the record shop forms an analogy to America: we know the ship is sinking, so there’s nothing to do but express yourself, and by doing that, hope to find a place in the decaying mass where you can live out your life in comfort. Characters struggle with their futures but the nagging implicit question is how they will find careers and people to accept them, which reveals how suburban and mundane the “struggle” in this movie really is.

As if to underscore the ideological nature of the 1990s, the film makes a great deal of the tension between being authentic and selling out. Losing quirkiness to be a corporate record store would be the worst thing ever! Yet the authenticity of these characters casts itself into doubt by being skin-deep, if even that penetrating.

Most of the stuff people do in this movie would get them punched out, fired, committed to an asylum, or just run out of town on a rail in real life. They constantly place their personal mental debacles before any kind of practical activity, even treating customers like stupid rodents who insult them by being in their way.

As if to make everything like a movie for children from the previous decade, the film resolves all conflicts by socializing. People just get empathy for each other, see past their quirks, and then decide that if they are all united, everything will be well and turn out fine.

It was excruciating to watch this moronic revelation of how far American culture had fallen. If the Soviets had held on for another four years, mandatory viewings of this film would have driven their citizens straight into the arms of Stalinism while demanding that executions accelerate.

In the final calculus, characters in this film do not overcome their deficits, only come to accept them and beat down their personalities so that they can become useful tax cows for a dying regime, all while viewing nothing larger than their own personal drama. It should be reclassified as a horror film.