Can Conservatives Survive In Popular Culture And The Arts? 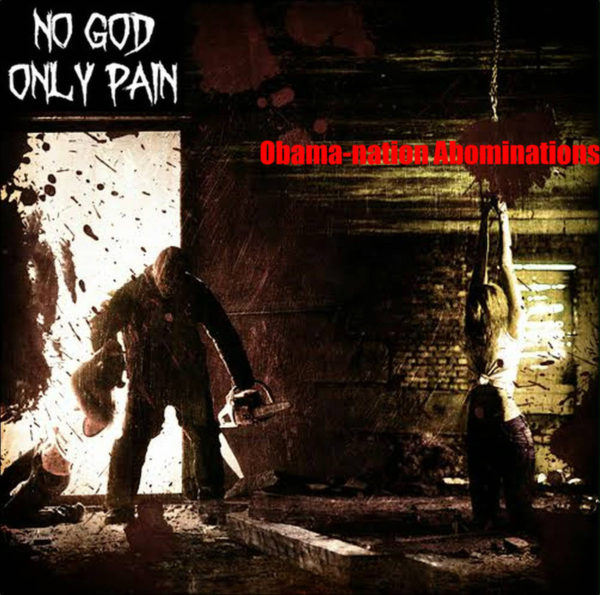 Many of you have, like myself, basically written off mass culture because not only does the vast majority of it exclude viewpoints relevant to my own, but it is actively hostile toward them in the childish way that tells ten lies in the time it takes to debunk one. Conservatives have basically retreated from the arts with a few exceptions.

Today I got a chance to interview a musician who has made a name for himself in the fields of hard-driving rock, heavy metal and punk with his “roadhouse dark metal” band No God Only Pain (NGOP). NGOP — unrelated to the GOP — just released a new single named “Obama-nation Abominations.” Normally, it would be career suicide to do this, but as he explains below, he’s looking for new territory not well-traveled paths.

Have you been penalized by the arts community for being not-Leftist?

Not overtly. What happens is you just don’t vibe well at auditions and in bands where Leftists are present. This group excludes you with their assumptions and behavior more than deliberate acts, and you just “don’t fit” with their vision. They are an odd group. They spend thousands on gear and then barely jam music or practice and are unmotivated except to get their Google paycheck.

Take this situation for example: you are a conservative alpha male (Trump-style) in a band called “Priest-Grinder” and you go to audition for female vocal led band named “LoveChild.” No matter how great you play or how great you dress at the audition, if Lovechild finds out you are in Priest-Grinder then LoveChild is just not going to let you into their shitty little liberal band. It is a lifestyle and goal incompatibility among other issues.

In the modeling industry, the casting agents were usually homosexuals with defensive attitudes. They don’t like straight people. There is some bias in that industry to push men and women to engage in typical Leftist behaviors.

To the arts community, do you think there’s a distinction between not-Leftist and Conservative?

They’re narcissists. They assume everyone is Left and then when they find out you are not they are shocked and hate you. It is like you are a rejection of their assumptions, on which they have built their personalities, and this makes them react so strongly.

Leftists have this whole notion they are so generous and giving. When it comes down to it, they borrow your guitar pedal / strap / etc and never return any of it. You give them birthday and Xmas gifts and they never give you one back. Any kind of enthusiasm you have for your band they will passive-aggressively refer to as you being “egotistical.” That is the kind of lame behavior you get from leftist musicians on a regular basis. People who believe crazy things tend to make themselves crazy.

WTF does “conservative” mean? How is it different than “libertarian”?

Conservative means you are hated in general because you like tradition and wish to preserve tradition to some extent, rather than being a know-it-all Leftist and saying let’s just start over (like when Ken Kesey went to Stonehenge and tried to start civilization all over again).

The hippies sought nothing less than to sweep aside all codes and restraints of the past and start out from zero. At one point the novelist Ken Kesey, leader of a commune called the Merry Pranksters, organized a pilgrimage to Stonehenge with the idea of returning to Anglo-Saxon civilization’s point zero, which he figured was Stonehenge, and heading out all over again to do it better. Among the codes and restraints that people in communes swept aside — quite purposely — were those that said you shouldn’t use other people’s toothbrushes or sleep on other people’s mattresses without changing the sheets or, as was more likely, without using any sheets at all, or that you and five other people shouldn’t drink from the same bottle of Shasta or take tokes from the same cigarette. And now, in 1968, they were relearning… the laws of hygiene… by getting the mange, the grunge, the itch, the twitch, the thrush, the scroff, and the rot.

This process, namely the relearning — following a Promethean and unprecedented start from zero — seems to me the leitmotif of the twenty-first century in America. – Tom Wolfe, Hooking Up, Macmillan, 2010, p. 149

Considering yourself a conservative means you are worried about what other Republicans think about you. Libertarian means you just want freedom for all, and use a gun to preserve your dang rights, instead of sitting on the couch while they flush your vote down the toilet.

Do you need to be Christian or WASP to be conservative?

No. Christ himself was not a Christian; he was a Jew and he was very conservative. There are a lot of reformed Latino gangbangers deep in the Christian evangelical movement as missionaries too these days. Their values are very conservative, though they may not always vote that way.

Does society discriminate against conservatives/non-liberals?

In the workplace, society weeds out conservatives and targets them with being “insensitive” and “raising their voice.” Males who have balls and aren’t wusses have trouble getting along in a modern sit com style office job these days, since they don’t fit in at the water cooler or the company picnic.

How has this affected your efforts to get NGOP/Rotten Copper out to the audience?

I have been able to get word out there for my band most art despite my obnoxious right wing views. But being a conservative and person with a Trump-style realist attitude causes interpersonal issues with Leftists and Leftist-brainwashed people in the scene. Also the women at my band’s shows have been lame undercover feminists a lot of them (it is not permissible to speak with them after performing) but they tend to be ugly anyways.

I think my band is somewhat different than other bands because we overtly express right wing views. But it’s a somewhat new thing for us to sing about right-wing issues. So time will ultimately tell whether or not it is a viable thing to do in a metal band or not. It is an experiment, to some extent.

I might add that my tilting the band’s lyrics to the night was somewhat instigated by my former bassist’s passive-aggressively expressed Left-wing views. He would grunt and come into practice angry, knock things over, and call the pope a knuckle dragger — I dislike the whole papacy but the current pope is a Leftist quack so calling him a regressive is dumb. Sometimes the bassist would insult Donald Trump: “How about we have a song called ‘Fuck Trump’?” (so intellectual!).

Keith, being a Leftist, did make his singing more inspired emotionally though, and there are definitely times where creative/personality conflicts result in creative tension which can sometimes enhance music (especially vocals).

I told that bassist You’re fired! and I shifted the band straight to the right. You can only take so much Leftist insanity before the time comes to strike back!

“Obama-nation Abominations” shows the basics of NGOP’s style: driving Motorhead-style rhythms, riffs with a melodic underpinning, and sometimes unorthodox song structures. “Obama-nation Abominations” also shows off a style of spidery lead-picked riffs derived from underground metal, and the type of thematic song structure that one might expect from a progressive rock band. We wish NGOP luck as they try to penetrate the mostly lockstep-Leftist world of popular culture!