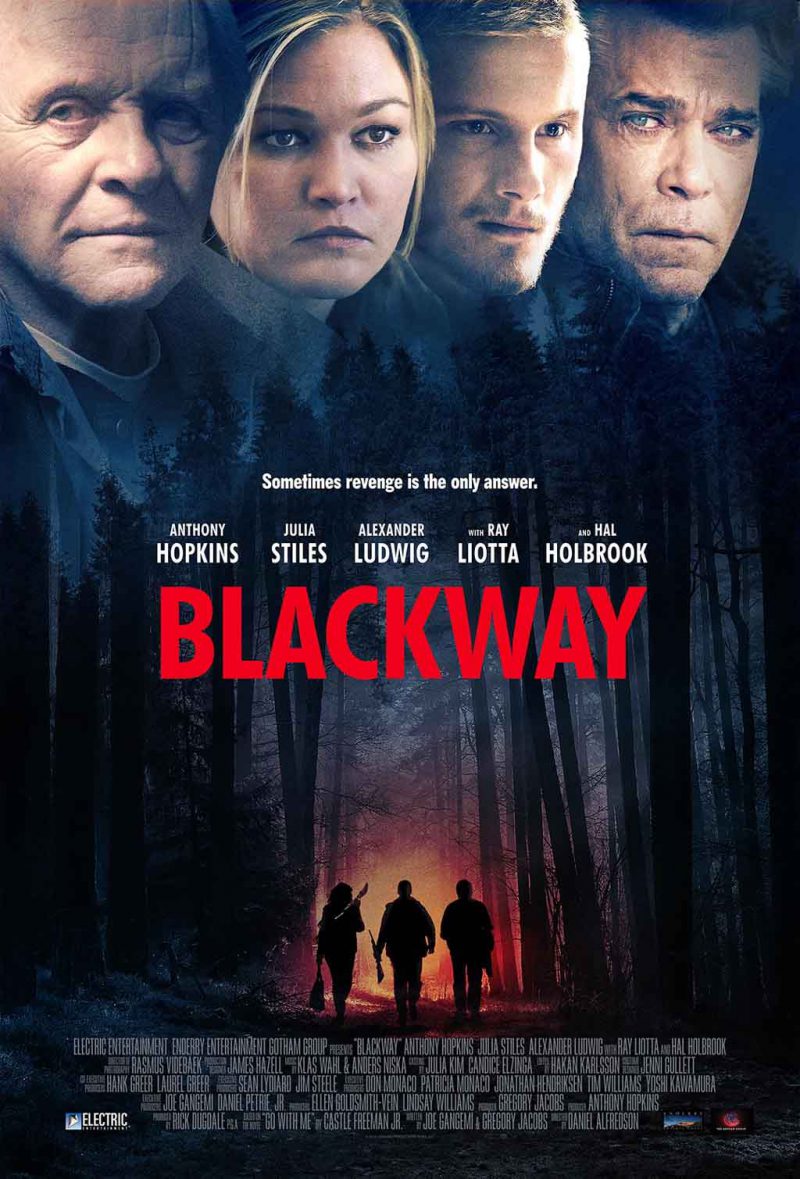 The tagline says, “sometimes revenge is the only answer,” but that misses the point of this film, which sets a classic Western plot in the northeast US forests. A man, connected to moneyed interests, menaces a small town, and a group of three misfits sets out to remove him.

Allowing its central question to emerge organically, Blackway borrows from High Noon with a pacifist female and a morally lazy town as the bookends to the driving force of Lester (Anthony Hopkins) who believes that some people are simply born bad and must be removed, just as one would kill pests or fight disease.

Richard Blackway, portrayed in terrifying self-centeredness by Ray Liotta, gives the movie its title with his ability to bend sheriff, industry, and citizens to his will by simply being more violent and more unreasonable than anyone else.

Entrenched in a world of illegal logging, meth-dealing, prostitution, and violence, Blackway turns the small town into a cowering mass of jellied humans who acknowledge his negative influence but will not raise a hand.

Enter Lester, a man with tragedies of his own, who seemingly on a whim decides to finally confront the evil and deliver his town from the grip of fear. He is joined by Lillian (Julia Stiles) and the mentally-challenged Nate (Alexander Ludwig), who pursue the villain.

At first, this effort is portrayed as an attempt to talk the bad guy out of being bad, but as more of his misdeeds are revealed, the characters acclimate to the idea that they are not on a diplomatic mission, but an extermination raid.

This quest results in them confronting their own inner moral sloth that has led to past missteps, and to resolve to finally do good, which requires being uncompromising. Stiles excels as the distracted and aimless teacher and part-time cocktail waitress who realizes, slowly, that discourse will not do the deed.

Instead of going full “atmospheric,” as most movies do, this film blends atmosphere with action through inspired editing. Scenes of hard conversation follow combat, with long shots of the wilderness and rotting town to situate us in its visual mindset.

Blackway probably sailed over the heads of the critics with a classic hard Calvinist morality tale that involves characters fighting themselves over the divide between what is convenient and what is real. It bears witnessing for a tight, careful script and epic clash of wills.