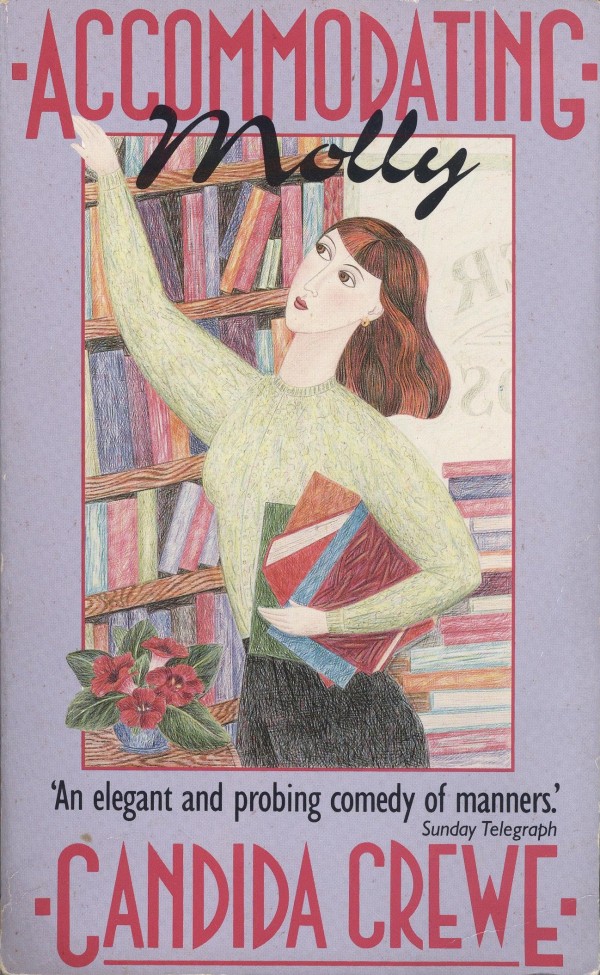 Under the guise of a novel about manners, Candida Crewe assaults one aspect of the fundamental problem causing the “death of the West.” In this case, she focuses on the misery created by the replacement of courtship with sexual liberation and its method of “dating,” in which men and women escape mutual obligation and make themselves miserable through an inability to commit, dooming themselves to loneliness and existential misery.

Accommodating Molly takes place through the eyes of a young woman working as an assistant in a bookstore, her boyfriend Dominic De’Ath, her employer Nick Winter and her parents. During her interactions with the publishing industry, Molly contacts the different circles in which these people move and sees the past and resulting present situation of each. Without giving too much away, Accommodating Molly follows very much in the tradition of Hardy, Celine and Houellebecq in showing us a kind of nocturnal landscape of despair united by a single commonality: the loneliness of people expressed through their inability to maintain stable relationships.

Somehow Ms. Crewe managed to sneak this one by the critics, who refer to it as “a comedy of manners” and other euphemisms, but at its core lies an attack on one of the great assumptions of modern time, which is that liberation of the individual to make arbitrary choices has positive results. Instead, Crewe shows us that as manifested in sexual liberation, this modern behavior results in isolation and self-hatred.

But I’m not going to admit that I, too, want to be a wife. You don’t admit things like that. Not ever. The rule is that you don’t let on. Not ever. Women in the latter part of the twentieth century have feminist ideals. They don’t think about marriage, unless it slaps them in the face. They certainly don’t tell people that marriage is the thing they aspire to more than anything else….Play the game. The game is that you’re fine as you are. Take it or leave it, frankly. (210)

As in the fiction of the 1930s, Crewe bypasses politics and issues to show that the fundamental root of modernity is loneliness through self-sufficiency. People rely on accomplishments, wealth and power, but have no connection to each other because they are armies of one. Each person is a self-interested agent who cannot admit any weakness, including a desire for more than themselves. The Enlightenment freed us to place the human form above all else, not realizing (apparently) that the human individual becomes a prison of itself.

Molly proves a likeable character because she is ordinary but well-intentioned, thoughtful and intelligent. She does not stumble through life so much as try what others are doing, and when it goes wrong, accommodate what others thing is the right thing to do even though it results in her own misery. Men in particular are portrayed as faithless creatures who refuse to commit for fear of limiting their freedom, and thus move on from one woman to the next, only learning too late that they too desire companionship and loyalty.

One compelling inclusion is the narrative of Molly’s parents’ marriage and its own betrayals, frictions and eventual failures prompted by the self-absorption of her mother. Through this device, Crewe shows how the best of intentions lead to the worst possible results. Like other characters in the book, her mother keeps up a constant flood of actions for self-interest, personal drama and theatrics to maintain her independence. Ultimately she reveals an emptiness so profound that it absorbs and destroys everything around her, much like the unnamed character in the book, which is our basic philosophy of life in the modern era in which the individual is king for a day hoping for his fifteen minutes and then retreat to solitary self-sufficiency.

‘Modern feminist ideals mean well, I’m sure,’ Helen said, sceptical, ‘but they conflict, you see, with that fundamental feminine instinct. We all bleat about independence, but we all want to be loved by men deep down. Our bodies, our minds, crave freedom, apparently. But they also ultimately crave security, husbands, children. Modern life is a sore test.’ (104)

Accommodating Molly cannot provide a happy reading experience. Its humor is of the sort that provokes a smile and grudging acknowledgment more than laugh out loud absurdity, but as these characters collide and dissipate, the only conclusion is that we are watching a tragic play in which absurdist laughter is the solitary possible response. Like the best of our literature, it peels back the fog of everyday events and denial that we use to conceal our actual motivations, and shows us the bigger picture in an amusing and provocative way, forcing our minds to admit that many of the crutches we rely upon are instead gravestones for our happiness.

Caucasian Students Get Bullied Most, But African-Americans Are Bullied More By Other Minorities | Danse Macabre