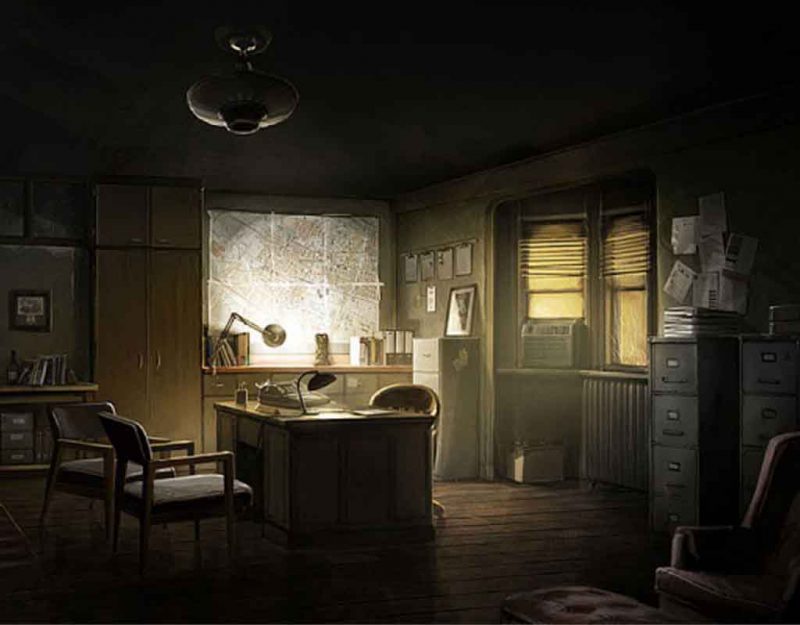 We are fortunate at Amerika to be able to present the second installation of the exciting dystopia saga, Crosses & Double-Crosses by Clayton Barnett. You can find your copy on the Jungle River store, but first, read this week’s segment of the story, “Those Lost.”

Nods to the two armed men at the door who recognized her had her in and right:  to the bathrooms first.  I almost always seem to be at my worst when he wants to see me!

With females still a rarity in ExComm she had the Women’s Room to herself.  Unlike her first visit, it seemed someone had managed to clean in the last few days.  And the near-freezing weather kept any smells from festering.  Sylvia put her suit coat over a radiator while she did what she could to her face and hair.  Afterward, she grabbed her coat and tried to shake the wrinkles out as if it were a matador’s cape.

At least it’s warm.  A few of the offices rated space heaters; the Director wasted no money on central heat.  “Work harder,” had been his reply to all such requests.  She walked down the hall to the last door on her right.  The single guard indicated with a toss of his head for her to go in.

Sylvia didn’t recognize the man behind the desk.  Barrett liked to change his secretaries every six months or so.  That was such a blow to institutional memory that she had already asked him about it.  “I don’t want any one person to know that much about what I’m doing here,” had been his odd reply.

And just what are you doing here?

“I’ll let the Director know you are here, Miss Fernandez,” the young man said, picking up a landline receiver.

She remained standing.  There were no chairs.  Sudden.  He set the phone down.

“Thank you,” she replied, her words making a small cloud before her.

His office was typically dark.  She did hear the hum of a heater under the desk.  Next to the half-empty whiskey bottle and highball glass were two pieces of paper and one thick file on his desk, but his attention just then was on what appeared to be a small photograph.  Barrett set it face down on the left side of his desk and beckoned her to sit in one of the two chairs.

“Reporting, Director,” she said formally before taking the chair.

“What you did with up north with Binger was exactly what I wanted,” he began, taking another glass from a drawer.

He already knows?!  And just how much does he know?!

He slid one of the two papers across to her before pouring some alcohol into the new glass then adding some to his.  To distract herself from her near-panic she picked it up to read it.

“Your decisive action to maintain the rule of law in our northern province was enough for me to overcome our critics here and in the legislature,” Barrett said, also pushing the glass across.  He raised his.  “Congratulations, Deputy Director Fernandez!”

She was much more surprised by his “our critics” than her promotion being made official.  She picked up her glass and drank with him.  “Thank you, sir.  I shall do my best!”

“Oh,” he paused and set his glass down, “I’ll need a lot more than that, I’m afraid.  Once we’re finished here you can head over to the south wing and start reorganizing things to your satisfaction.  It might be about a month before you are to head out again.”

“Will it?” she quietly reflected.

“The next order of business is just an FYI,” he said, finishing what was in his glass while moving the next paper to her side.  “This is the official announcement that DD Stephens and a few others have chosen to leave our organization and return to the Ranger Division.”

She quickly scanned the officious sounding lines – very much noticing the name of Alan Rupert – and looked back up.

“That implies there is an unofficial version?”

“Of course,” Barrett agreed, pouring more for himself.  A look to her made her shake her head.  “He and the rest were… less than pleased at having to raze Wichita.  Pleading women and children and all that.”

“In fact, Stephens took it upon himself to arrange for the legitimate refugees to be moved south into former Oklahoma.  I’ve already tasked your man Binger with getting them resettled by spring,” he said around another mouthful.

“I’m surprised that such near-insubordination is tolerated,” she tried gently.

“I reward initiative whether it is to my advantage or not, Sylvia!” He took another long drink.  “You think I like this job?  The evacuations are bad enough; breaking men’s souls to do it is likely worse…”

His drinking and this conversation are headed somewhere dangerous; him calling me by my name…

“I’m sure you noticed at least one more name on the list,” he continued after another drink and refill.  “I’ve asked my cousin to assign Rupert to be chief-of-station for College Station and its surrounds.”

“No matter what else happens, your sister will be protected.” She saw his fingers tighten about the glass.  “Nothing more important than family.”

Moments passed before Sylvia spoke again to ask about Stephens.

“So who is to replace him?  Who will be my opposite in that Chief Directorate?” she asked, trying to get his mind back onto a business track.

“Baker,” he said with a nod.  But pouring more whiskey.

“Really?” That surprised her.  “I would have thought Randolf from First – ”

“No.” His rejection was complete.  She was also pleased to see him put the cork onto the top of the bottle.  “No one gets promoted out of the First Chief Directorate.  After what I’ve ordered them to do they are no longer fit for legal society.”

“For human society,” he sighed, sagging a bit into his chair.

Sylvia understood.  Men who would put families onto boxcars to be dumped out at the border with no food or water; men who would nail over seventy thousand people to crosses… it was never war.  It was something much worse…

“Was there anything else, sir?” she asked, staring at the folder in case he had forgotten about it.

“Yes.  What I said is your next road trip,” he said while moving the thick folder across the desk.  His actions were such that the small photograph on the corner was dislodged.  The convection currents from the space heater drifted it to the floor on Sylvia’s side of his desk.  She reached down to retrieve the photo.  Now face-up and turned to her, she could not help but regard it.

A grinning Oriental girl in her late teens.  She wore a lifeguard’s bikini and was holding some kind of Chihuahua mix.  Her eyes were hidden behind sunglasses and her long black hair in a single braid.

“Sorry, sir,” she said, returning to picture to him.  Without a word he took it and slid it into his jacket pocket.

“The Mexicans,” he began as if nothing happened, indicating the folder, “have occupied San Diego.  They are moving a brigade toward Tucson as we are talking.”

“Certainly not against us,” he said shaking his head.  “More like just moving into the power vacuum, justified in their eyes by their long-standing claims to the Southwest US.”

“And this?” she asked, putting her right hand onto the folder.  It was pointless to try to read it all now.

“Their next move will be against former New Mexico.  I want all the legal work done in two weeks for us to occupy everything east of the Rio Grande,” he finished his alcohol.  “That is, after all, traditional Texas land going back to our First Republic.  Oh, we’ll also need cover for some pockets across the river, as well.”

“If I may ask, why, sir?  It’s by and large not productive land like Oklahoma.  Why add this burden to our nascent state?”

“It’s not the land we need,” he replied with a nod, “it is the minds in Sandia Laboratories in Albuquerque and National Lab at Los Alamos.  Some of the best special weapons designers in the world.”

“I see.” Sylvia didn’t entirely but understood that she had better review the file under her hand before morning.  The only thing left on his side was the corked bottle.  “Was that all, Director?”

She stood and moved toward the door.

“She was my eldest daughter.  Callie.  Lost in the Breakup,” she heard him say softly.  “I lost her.”

Sylvia let herself out.