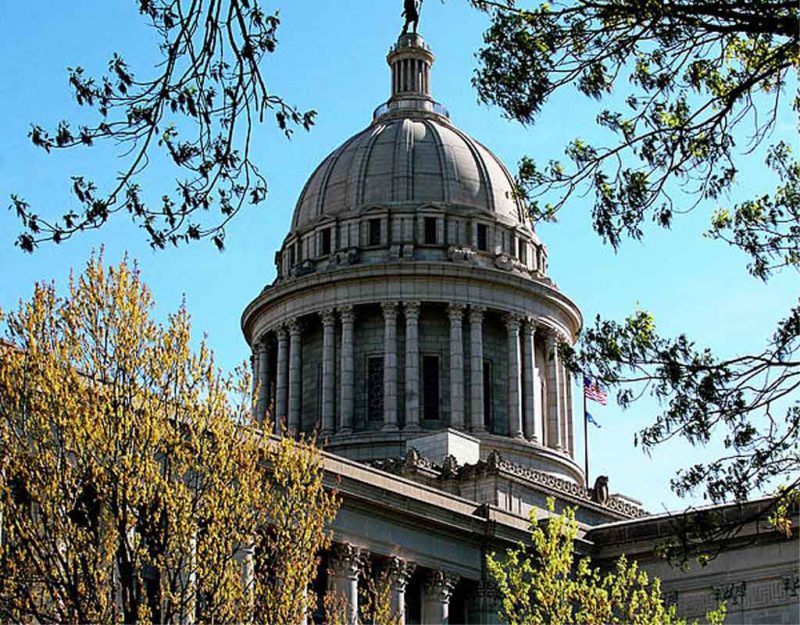 We are fortunate at Amerika to be able to present the second installation of the exciting dystopia saga, Crosses & Double-Crosses by Clayton Barnett. You can find your copy on the Jungle River store, but first, read this week’s segment of the story, “Treason.”

Sylvia walked slowly next to the older man in a dark brown suit with a yellow tie.  She stared through the leafless trees of winter on the southwest side of the Oklahoma Capitol Building at the city’s downtown, about two to three miles away.  There were only a few lines of smoke in the sky.  When the economy collapsed anyone with a relative – no matter how distant or previously ignored – in the surrounding farmlands found a reason to abruptly leave.  Those without relatives, or survival skills, rioted then starved.  However, since it was attached to the main US electrical grid, when the power failed the State went dark.  That was the beginning of their decision to look south instead of east for help.

“Not a senator anymore, am I, Miss Fernandez?” he quickly shot back.  “Not since you and yours closed down the government!”

His words were angry but he managed to keep his face calm.  Sylvia noted his very sharp features, dark hair, and tanned skin, even in winter.  She wondered about his ethnicity.

“As I said to your Assembly,” she tried again, “this is a temporary measure.  Self-government will return on a regional basis as we get your grid switched to ours.  Would you rather stay in the dark?”

Before she had made her speech almost two hours ago an aide had whispered to her the names of the top two oligarchs in the State Government.  Using less than a minute to check their files, she decided to find Binger immediately afterward.

“We certainly welcome your technical help,” he replied after a pause.  “We simply did not anticipate that Texas had… territorial ambitions.”

“The passing United States were made first by how quickly a man could ride a horse, then pilot a barge down a canal, and finally send messages and men by rail.  In this new world, information moves electronically.” She turned to face him.  “All that matters are grids and population centers, both of which, in these uncertain times, must be tightly controlled.”

Sylvia turned away and took a step. Binger followed next to her.

“Before its death, the US had already made generational policy decisions that pointed to its end,” she continued, surprised he didn’t interrupt.  Most people were still in denial about America.  “The Extraordinary Commission has only months, perhaps a few years, to not only eradicate those policies but end their effects.”

“Thus tens of thousands of crucified on your southern and southeastern borders?” Binger asked grimly.  “I guess I should commend your truthfulness when you said ‘eradicate.’”

“The Director has taught us that words mean things and are thus very important,” she returned.  “History will judge us by what we did, not by what we said.”

The former senator stopped.  She did too.

“You may be the only invading White Devil that’s ever told one of us the truth!” he exclaimed.

“White Devil?” she asked, raising her right hand to her cheek.  “I might be born in New York City, but my family is mostly Filipino and – ”

“Even with that and a name like Fernandez, I’m rather sure you family is all upper-crust Spanish, right?” When she dropped her hand and her eyes he smiled and continued.  “My mother was full-blood Cherokee.  You White Devils from the east drove us off our land, across the Trail of Tears, to this place.  Now another army comes, this time from the south, to once again take away what we’ve built.”

He waved her reply away.

“While you might have told me the truth, the rumors I’ve heard from your new country is that it will make apartheid South Africa look like an enlightened liberal democracy!  How long before a mixed-race like me is nailed to one of your Director’s crosses!”

He was loud enough that the few stragglers still leaving the building paused before seeing who it was and quickly moving along.

At least now I know his genetics, she thought.  But how to answer him?

“I have the authority, based upon what you just said, to nail you to a tree this afternoon,” she said raising her eyes and arm to point past him.  “Perhaps on that grassy Mall just north?  But don’t worry, you won’t be alone.  If you are a traitor then all of your staff must be as well.  I can order their crucifixions as well!”

She was not kidding.  And she knew he knew it.  He didn’t beg or run.  In fact, his expression changed little at all.

“I notice you are not,” he said casually.

Clever and brave!  A perfect man for me here!

“No,” she said while seeming to toss her head, looking all about.  “Come walk with me a bit more.  It will look to others that a powerful man is trying to shore up his position under the new regime.”

“But that’s not what’s happening here, is it?” he said softly next to her as they walked.

“No.  If I don’t break ExComm in the next twelve months we will never be rid of them; they will become the KGB of Texas,” she said in perfect truth.  “A coup in Austin is impossible.  Only in our new provinces, here, western Louisiana, and soon New Mexico, will the resistance have to form and organize.”

“And where do I come in?  I read once that being nailed up is a horrible way to die.  I do have a family, you know.”

“Get any idea of Oklahoma ever being a State again out of your head,” she replied at a huge tangent.  “But if we don’t end ExComm, a pogrom will come for you and yours, sooner or later.  You asked first where you come in?  If you’re a politician you have to be a lawyer, right?”

Sylvia stopped and faced him, extending her right hand.

“Andrew Binger?  You are now working for me.  I’m making you Governor-General Pro Tem of this province.”

He paused before taking her hand, but he did.

“Austin will have their own man to send but things are in flux here.  You have a window of opportunity to build up an organization from scratch and move it into the shadows once you are replaced,” she carefully spoke her treason.  “Even so, now that you are ExComm, I think I might be able to keep you on as your replacements right-hand man, ready to move when the moment is right.”

They dropped their hands.

He watched her do another check of their surrounds.

“I have someone who is an expert in communication.  As you are my employee now it will be expected that I frequently contact you.  If something happens to me, he will, instead.”

“And who is this ‘he?’” Binger asked, just beginning to grasp what this powerful woman was offering him.

“His name is Thaad.”