Conservatism Inc.: The Battle for the American Right by James Kirkpatrick 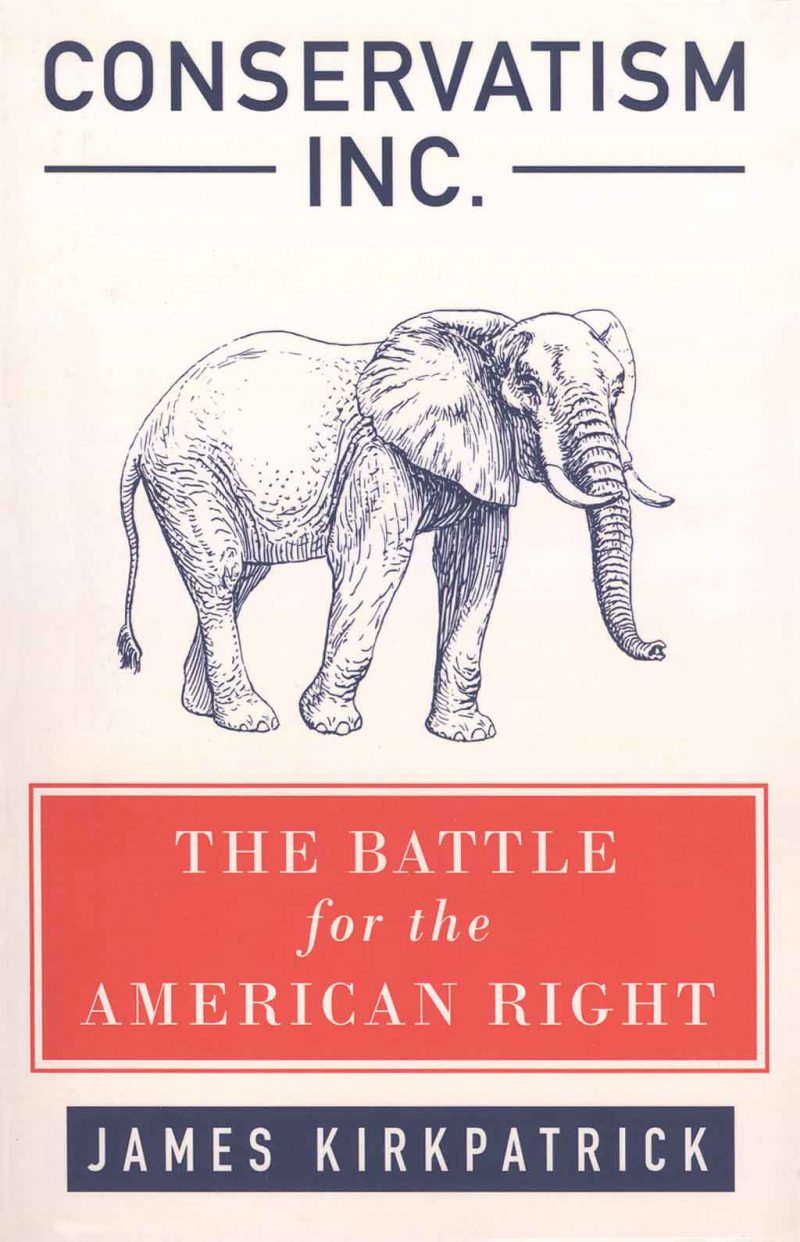 Conservatism in the postwar period experienced a great retreat, since it was afraid of appearing to be too close to anything that the Third Reich would have endorsed, and in doing so, realized that it had been retreating for far longer.

At its core, conservatism has little hope; it recognizes that societies undergo a process of entropy by which people forget the original ways that worked, and separated by wealth from consequences, go further into navel-gazing neurosis and a vicious cycle of social status signaling for symbolic but unrealistic ends.

Conservatism Inc.: The Battle for the American Right tackles a twenty-first century conservatism which has forgotten what it has always been in an effort to avoid offending the increasingly powerful Left over the past couple centuries of democracy.

Written as a series of essays, the book covers political events and theory alike, trying to phrase in plain terms the root concepts of conservatism in an effort to get around the taboo on the National Question.

Despite being almost unrepresented in major Beltway Right institutions, immigration restrictionism proved to be the singular issue that allow a political leader to establish credibility with the Republican base. From John McCain to Marco Rubio, one prospective GOP “leader” after another founded on the rocks of “comprehensive immigration reform,” as the Republican base made it clear again and again that it was unwilling to follow its self-appointed spokesman. (219)

This question manifests not just in immigration, but wider issues of race, civil rights, and equality. Conservatives oppose these like any illusion because unrealistic notions lead to civilization decay when people act on them as if they were true, a dangerous assumption that benefits the Left only.

Kirkpatrick follows how American mainstream conservatives dance around this topic and do their best to avoid it, only to have reality whap them in the face like a forgotten rake in an overgrown lawn with the problems created by diversity, including economic, social, and cultural disruption.

He follows the breakdown of American society in Ferguson and the failures of diversity worldwide, as well as the sacrifice of many political careers to political correctness or a refusal to violate it. For the most part, the book reads as a political analysis based in the idea of reversing denial.

Divided into three parts, this compilation addresses the general issue, the past leading up to the present era, and the Trump era, in each looking into how mainstream conservatism — the “Conservatism Inc.” of the title — has hamstrung itself trying to look good to Leftists and “moderates.”

In the analysis that Kirkpatrick offers, the mainstream Right gave up on being able to change anything structural as America marches to the Left, and has become entirely captive to its donors, both the little guy and big industry:

Yet this presupposes that Paul Ryan’s job was to achieve political victories. It wasn’t. It’s like saying “political consultants” Rick Wilson or Ana Navarro have the job of winning elections. In fact, their job is to get money from the gullible and denounce the Republican base on Left-dominated Main Stream Media. They are good at their job — once you understand what it is. Similarly, Pauly Ryan is good at his job. He delivered for his donors with the tax cut and he is now moving on to his reward. (214)

These lively little essays move along smoothly thanks to Kirkpatrick being willing to overlook the unofficial rules of mainstream journalism and focus on spitting out a blunt analysis of the topic in practical terms.

Each piece tends to build toward a thesis in the middle, then interpret that through a present-day context, ending up on a contrast which mirrors whatever hook it used in the first paragraph to bring in its readers. This makes for energetic reading and a clear, biting communication.

Kirpatrick writes with a real zeal, or even joy, for describing the workings of a political system and its clash with common sense and observed reality. He appears like a voice-over, showing us the stumbles of democracy — which either buys votes, or allows them to be bought — as it confronts the clash between special interests of minorities, industries, and egalitarian fanatics and the needs for human adaptation to provide a stable, functional civilization.

Conservatism Inc.: The Battle for the American Right seems less like a polemic and more like a postmortem report on a good idea that, like anything in the hands of the crowd, became twisted into its own opposite. Mainstream public conservatism became destructive once it accepted a role as controlled opposition.

The key assumption of American conservatism is that defeat is not possible. As a corollary, conservatives believe that they are somehow still in control of America and that the United States remains a “center-right” nation, even while the Cultural Marxist left dominates almost every media and cultural institution.

Our principles, conservatives seem to be telling us, prevent us from fighting for our interests. The assumption of victory is key to how the movement functions. “Fighting,” after all, presupposes both the possibility of defeat and the existence of an enemy. In contrast, the conservative movement’s assumption of victory means that there really is no enemy, at least not on the Left. Thus, politicians like Mitt Romney and Marco Rubio are tolerate of antifa, but sound the alarm about the racial insensitivity of President Trump. (10-11)

Rare for modern writers, Kirkpatrick describes where we went wrong clearly and succinctly:

In a triumphalist narrative familiar to every conservative, William F. Buckley assembled a cast of intellectuals at National Review, loosely unified them around Frank Meyer’s “fusionism” of social conservatives and free market supporters, and “purged” the unrespectable elements of the movement. (8)

Kirkpatrick uses the “assumption of victory” to key us into what this pathology really is, namely an assumption of defeat, and points out the many ways that denialism of the Leftist takeover of America and its demographic transformation has guaranteed no future conservative victories.

In essence, Buckley created taboos, and taboos have a habit of converting a group from being truth-averse, or merely afraid to mention a problem, to being truth-denying, or committing to affirmatively denying that the problem exists. Inversions follow this pattern as offense becomes speech codes.

That in turn creates a schism in the Right where the public face of the movement is defined by its denialism, while the underground finds itself identified by its refusal to engage in that denialism, warning the misled masses that anything short of the whole story results in disaster.

As others have observed, partial truths are the worst type of lie.

To be on the “far right” when young is to doom yourself to being a Cassandra. You know, and you accept, that your prophecies will go unheeded. It’s for that reason that so many fall into extremist ideologies or wildly excessive critiques; you aren’t going to win anyway, so why even consider political realities? I think for many of us, that was one of the reasons we supported him from the beginning: to paraphrase Tertullian, precisely because his victory was so unlikely, it was necessary to support Donald J. Trump. And then, somehow, we slowly began to realize that we could actually win this thing. (151)

In fact, the death knell for movement conservatism seems to be that the people whose views were excluded realized that we could actually win this thing on a broader level than even the Trump presidency, as liberal democracy declined once its postwar policies, set into place, revealed their inner contractions and inevitable failure.

Reading Conservatism Inc.: The Battle for the American Right helps solidify our knowledge of the future. It transforms certainty of defeat into a commitment to victory, realizing that attempting a Buckleyite removal of that which offends others will not work, and that we have to steam straight ahead into battle knowing that it will polarize, divide, and perhaps shatter the United States.

Like the moment a fever lifts after days of illness, this book presents a hopeful dawn for those who are tired of avoiding taboos in order to placate the masses and push along a few partial truths as we try to stop “progress” from annihilating what is left of Western Civilization.

A pleasant read, owing in part to its division into smaller pieces, it presents us with the type of certainty that comes from knowing what does not work, and why it was doomed, which allows us in turn to look toward the future as a place where actual conservatism can exist.