We have giant brains. Our tendency is to fall into them.

We know the world through our mental objects. We can mistake those mental tokens for reality itself.

This leads to a state alternately called fatalism, narcissism, and solipsism: finding the world bad because it is not our own minds. 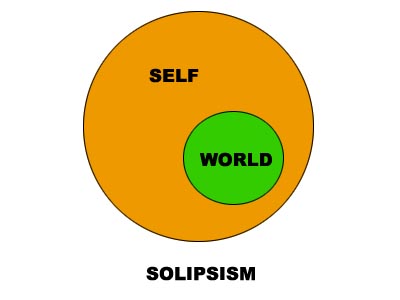 To a nihilist, this is the fundamental human fallacy, parallel to the “sympathetic fallacy” mentioned above (note: sympathetic fallacy was once taught in most literature classes; with the decline of literature, it is no no longer taught and replaced with the “affective fallacy,” which is the notion that emotion in a story is important; we wonder why such a neutering occurred).

People want the world to be part of their own minds. They want their thought-objects to replace reality. The thought objects are under their CONTROL, while reality is not.

Most people who become dissidents, activists, etc. in our modern time take another path. They believe that belief itself is a problem, so they limit themselves to a anthrocentric perception fo the world, where humans are in control and entirely unrelated to nature. 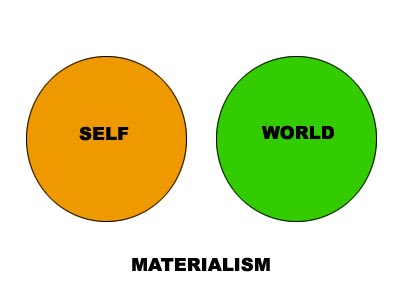 Materialism denies any patterning in common between humans and the world. It seems to deny solipsism, but provides a handy shortcut back to solipsism by making the world’s patterns of organization entirely foreign to our minds.

Luckily, idealism rectified this situation to some degree by pointing out the harmony between thought-process and the natural laws of the world.

However, that in turn is abused by populists, who know what their audience wants to hear: “The world is anything you imagine it to be.”

This reality-optional view — called relativism, pluralism and equality — is very popular with those who have trouble with the world. It is not what they wanted, so they wish to revert to solipsism, so they create it out of idealism. 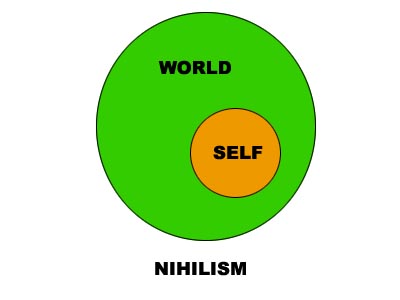 If you want the boneyard bottom line of philosophy, it’s nihilism. Nihilism is like philosophizing with a sawed-off shotgun.

In nihilism, we are entirely subject to the world, including from inside.

This means that the world is not inscrutable, but our thoughts about it are often confused.

Further, the two are not separate. Events occur in the world, and we react to them like animals aware of their own mortality and risk at play.

So we must adopt the principle of nihilism, and develop it to its logical extreme. 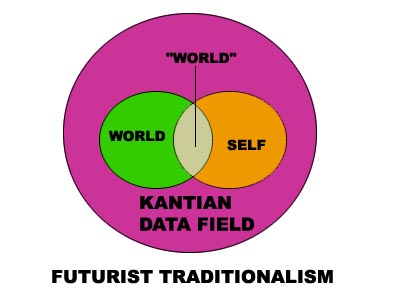 This is a worldview that is more complex, and most people who try to approach it in a linear fashion will fuck it up. In addition, 4/5 of even our brightest populations will fuck it up by lacking the circuits to comprehend it (doubly screwed up by the Dunning-Kruger/Downing effect, whereby the stupid are confident and the smart, underconfident).

Futurist traditionalism adopts the Kantian idea that we move through a vast field of data, and through our relative interaction with its parts (and their interaction with each other), create a spaciotemporal dimension. Time and space are “relatively” consistent owing to the interaction of parts that are not us; however, our experience of them is intensely internal and we must be skeptical of it. Even more, this shows us that by the nature of relativity, time and space have a precursor. For objects or forces to be defined in a relative space, they must have an opposite to create their boundaries. This means time and space are not defined by each other, but are each effects of another state.

This Kantian data field corresponds to Plato’s world of forms, Myattian acausal space, and illustrates the importance of Schopenhauer’s principle of sufficient reason: that which is informationally different is unique, and thus outside of placement in the spaciotemporal, has a secondary role which may be more or less importance than its position in context.

The populists will fuck all of this up of course, and turn it into absurd fantasies about heaven and a moral balance where the meek inherit the earth. If you’re an idiot, by all means endorse such ideas.

For those who are looking for more interesting fodder, this opens up possibilities, and yet remains coherent with the nihilism that keeps us from confusing our thoughts with reality and thus drifting into crowd-pleasing, ego-flattering and drama-inducing solipsism.

Information overload | Diversity is failing for everyone