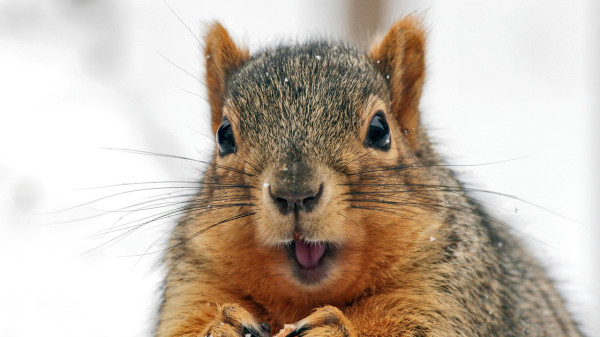 At night I would try to sleep. But they were out there, plotting against me, scratching against the roof and taunting me with their incoherent calls. In the morning, bleary eyed, I would find my hubcaps missing.

During the day they would sit lazily in trees, munching fermented nuts. Sometimes, they would come to the house and tear at it, making passages into the attic. If I caught them there I would flail at them, but sometimes they bit me. They would attack my wife when she went to put bird seed in the garden, and they stole any shiny object they could find and took it back to their garish nests which reeked of feces. Worst of all, they had come into the attic through a rusted gutter, and now had holes everywhere. There was no inducing them to leave.

I could not remove them from the attic for fear of shooting a weapon in the house and what my wife would do to me if she found me murdering squirrels. In fact, these were the worst years for my relationship. Everytime we talked, we would argue. She had one way, I had another. During the early years, we each worked to find the right answer, but now, we just wanted it our way. So we almost always ended up doing things each our own way, and then meeting for dinner in silence.

My kids did not understand either. They wanted their own space, not to have me telling them what to do. My daughter even made a pet of a baby squirrel, and would be seen carrying it around carefully, petting its head and lowering her lips to kiss its soft, strange skin covered in fine hairs. When I talked to my kids in those days, it would end with screaming and the slamming of doors. I could not show them that their interests and mine had a common path.

The night it happened… my wife and I did not have dinner together, because we could not agree. My son came home late, drunk, and told me he was not going to college because he did not want a career. I told him he was a welfare bum and not much better than the squirrels, and he agreed. “Better to be a useless rodent than to live in your corrupt, money grubbing higher culture,” he said. My daughter was in her room with her squirrel. My wife told me to clean the dishes, and I dropped one, and she told me I was never paying attention to what I needed to be doing. I told her that after a long day of work I wanted to no longer be thinking about primitive stupid machines, or what other people wanted; I had done enough for nine hours, and then an hour of commuting each way.

So there I was lying in bed, thinking about it all, unable to sleep. And down the hall I heard my son making noise, and next to me my wife was muttering curses, and somewhere my daughter was pacing, murmuring perhaps to her squirrel, and this went on for hours and I could barely sleep and my head got thicker with rage. Finally, I got sick of it — I admit I had a tantrum — and I murdered every one of the little fuckers. I went to the attic with my crossbow and slaughtered every single one, reloading and shooting like a dance between lovers. The small bodies piled up, a pathetic site, but my heart was cold and the rage felt good. I was doing a good thing.

When I was done, I threw away the bodies and went back to bed. Silence reigned. Everything was good. In the morning, I got up and had a full breakfast, and no guilt like the preacher suggested I might. In fact, I have never dreamed of that mass murder, nor felt a twinge of regret. When I thought of it at first, with all of those grey bodies in a pathetic heap, I had a surge of energy in my veins like desire for a woman, but now when I think of it, I am empty of emotion. The attic stinks of urine less however.

Some time after that I caught my son drunk outside in the snow for the last time, and told him to ship up or he was going to military school. He left and the strain wore down on us all. My daughter came in crying because she had slapped her baby squirrel for disturbing her sleep, and he had run away, looking for a young squirrel of his own to love. My wife blamed me for sending my son away, but I told her what else could I do, as he would not carry on my line or help us when we are old. “Fool,” she hissed. “We have money and we have machines, what do we need to worry about death for?”

It was a few years after that when she took the car in and the mechanic told her that the engine was faulty. Rather than call me, she spent the money. I went out to look at the car and saw that he had taken our new engine, because the car was only two years old at the time, and put in an old engine. “Well, I don’t care, it runs better,” said my wife, looking at the television. I told her she should have waited for me, but she said she was tired of having me make these decisions. We ended up having a massive fight and when it was over, she would not look at me but she had no tears either. I went to a bar and drank like my son, then drove home somehow; I don’t know what I was doing. When I got there, she and her clothes were gone.

My daughter and I live alone now. The fucking squirrels are gone forever and have never returned, but my house is not in order either. In fact, it is miserable. However, I do not blame my extermination of the squirrels. That did not cause this. What caused it was here before then, and in fact, before the squirrels came here. All of that energy we had years ago to make things right, to understand one another, had been drained away… into my job, into her television, into his alcohol, into her pets. We were empty when we came to confront each other, and we let everything slide, which was why the gutters were not repaired and the squirrels came into the house in the first place. I am glad I killed them, and I do not think it caused me loss, but I am also sure it did not fix anything.