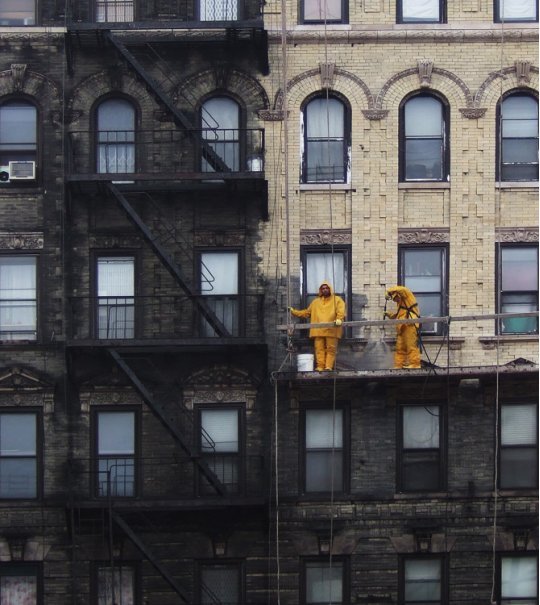 Once this pleasant, sunny courtyard rang with the cries of children at play. That was the week before disaster struck, and began a process that we know only too well.

As the first tendrils of disaster touched this happy community, residents rallied together, and declared their intention to fight disaster with the bonds of a community — love, sharing, forgiveness and a helping hand.

(Audio: “I know this is gonna be hard, but I’m here for the long haul,” gruff voice of local longshoreman, or maybe a painter. Someone who is not a radio-employed intellectual from New York, please. We have empathy for the other half living.)

But as the disaster deepened, those strong voices dropped out one by one. First the busy bus depot flooded in warm blood. Then people began to abandon these homes they worked for over long years of struggle. Finally, the children disappeared.

(Audio: sad music, preferably a minor key modulating to a lower key still in the minor, with a two-note pattern of bright incidentals for contrast.)

Now this once-happy community is all but abandoned. Buildings rust next to burnt out cars. The government promises aid, but it comes slowly. We all know the rest. And even though we give, we cannot stave off this aftermath of disaster.

We can see radio programs as a pattern, much like patterns exist from which we cut clothing, design furniture, or write computer code. The pattern of this radio program is repeated not only on government-funded public radio, but also on privately-owned big media channels, and even more alarming, on the indie stations. Monkey see, monkey do, and this successful product format can be emulated to share in the success.

Looking behind the visual and political cues, and the putative content of the program, we see the emotional content of this pattern. It both memorializes tragedy, and seems to affirm its inevitability, while offering token methods of resistance. This in turn creates a psychological pattern: the sense of living with constant small tragedy and being impotent to change it, and finding solace not in fighting that impotence, but in accepting it and sharing emotions with others.

This pattern can be found other places. The best spot to locate it is a drug and alcohol rehabilitation center. People stand up, say they’ve screwed up their lives and cannot manage their own lives, and so they need someone to tell them what to do. God, the law, morality and economics all get mentioned as part of the same process (revelatory). What is the psychological pattern? Submission to negativity through acceptance of the negative but endurable.

“I get raped nightly,” said one slave to another. “But there’s always food afterwards, and it’s not as bad as the guys in the field have.” The other shrugged. “Share some of that food with someone too ugly to be raped, whyncha?”

When we look at the logic of submission, we see a convergence of human psychological factors. The “Stockholm Syndrome,” where captives bond with captors, is part of the same psychological pattern that has beaten wives clinging to their abusers, or anally violated children defending their parents. Yes, the situation is bad; however, we can’t face what we have to do to fix it; therefore, we endure and find some way to make our sadness into proudness. Although our lives are meaningless, and we fail daily, we are the greatest martyrs of all time.

This psychological pattern is a subset of all cognitive dissonance patterns. In these, reality is painful, so people invent justifications and use them to supplant measurement of reality. We could use the old cliche of an ostrich hiding its head in the sand, but only if there’s a television down there, dramatizing the sadness. It is an inversion of art: instead of singing the beautiful, we find praises for the ugly and disguise it as beauty, because we have lost belief in beauty.

As good nihilists, we note that this loss of belief in beauty is vested more in belief than beauty. We have made beauty contingent upon so many moral justifications that it is socially taboo to note beauty without somehow tying it to the plight of the disadvantaged (morality for dummies: when we fear for ourselves, we want to find someone in a worse position than ourselves and demand they be protected, like a human shield; this unites individuals into crowds determined to destroy anyone who might not need the protection of the crowd, like a populist Mafia). What a beautiful vista — we can build public housing here.

Through this process, what was once adaptation becomes a perverse addiction to failure and ugliness, so long as we find some hip new way of presenting them on the radio or television. You can see it in the irony of the hipster, who if his band sucks, will tell you all about how using a tuba to blast jazz riffs over indie rock guitar makes them unique and different and worthy of your attention. The question of “Is it good?” has been replaced by the question of “Do we do ugly, boring and failing well?” It’s like a yard sale of used colostomy bags.

Cognitive dissonance, by the nature of denying reality, puts us into dangerous territory. It is spread easily through social expressions because if our good buddy Joe30AF0B18 comes up to us and tells us that his job failed, he has AIDS and his children are mentally retarded, we want to say something nice to him to make him feel better. So we tell him that Jesus loves him, or he’s unique, or that we’ve never heard such a moving story and he should call public radio. In doing so, we take some of the need to justify misery into ourselves.

What is enduringly positive about nihilism is that we cut ourselves free from this nightmare of justification and socialized praise of death, and instead, look toward the actual design of reality. People with no goal in life want to turn nihilism into fatalism, so they have an excuse to sit on their fat asses pleasing themselves but yet can justify it with competing moral logic. “All is lost,” they wail. “Oh well, might as well tuck into this pizza that just arrived… and there’s Madden on the PS3, soooo…”

Nihilism can be more coherently expressed as the scientific method with a desire to remove the scientist. We look at reality, its repeated patterns, and note them in a mathematical sense. We then remove the bias of the scientist not by erasing it, but by putting it into context, as in “you are a person within a world” and not “the world is the expression of yourself.” We look at structure because it is consistent and in a sense is more real than tangible, physical factors. We can make a chair out of feces, wood or egg whites, but the only way we can recognize it is by its form serving a function made obvious by the needs of those who would sit, so even if it is without any conventional “this is a chair” cues we can recognize it.

As good nihilists, we look askance at this world of weepy public service announcements because it is not real. We see that reality exists in parallel everywhere at once, and so inevitably there is tragedy somewhere. What does it matter to us? We cannot change it, and might not be advised to do so, especially if the tragedy was a community built on a floodplain or supported by a degenerate industry. We can do what we must do, and the only ultimate measurement of that is what we create in the physical world. Our thoughts die with us, as do our emotions. We lose out when those emotions are repeated mass media indoctrinations.

What is real is the knowledge that, as one old empire (the global economy and moral world government) begins to find out that its design is inferior, a new empire rises for those who want to grab it. If 99% of the people on earth are incompetent morons and/or are delusional and weepy, that means those of us who cut ourselves free from the old and dying emotional pattern are able to create and enjoy ourselves — and succeed while doing it, meaning that we inherit the future.

The people who uphold the dying empire, even by criticizing it and creating endless radio shows that fit this maudlin pattern, show themselves to be not only obsolete but unable to see beyond appearance. They cling to the feelings they can derive from the pattern of praising dysfunction by mourning its consequences but not looking deeply into its structure, and in so doing, approve of their doom. Laughing at them lessens any guilt you might catch from them like a pesky cold in a crowded office.

Most people you meet in life who claim to be outsiders to the dying regime are physically outside of it, but mentally and morally inside of it. This includes the “nihilists” who want an excuse to do nothing and sound smart for having figured out the futility of it all. This also includes the smart, shapely, young, attractive, compassionate and blonde radio hosts who want to get all weepy over whatever vestigial limb of the human amoeba just got its ass handed to it by nature, economics or logic. These people are caught up in the emotional pattern that is opposite to nihilism.

They, like most people who are addicted to these negative emotions, are hoping to share their misery with us and neutralize us, and drag us down with them. Misery loves company, as the cliche says, but even more, miserable people are threatened by anyone who emotionally or physically might escape their debacle. They don’t want to save themselves because it’s easier to weep than take action. But they do not want to see anyone who might not have their disease, because that competition will best them, and they hate that.

Honest nihilism liberates us from that dying cycle. Nihilism eradicates morality as it is practiced, and gives us space to re-invent a civilization that is not based on pacifying the masses with morality, but on working together to build something beautiful. Our goal is not to praise the darkness, declare all is lost, and go home to our pizza sofa video game klatches. Our goal is to transcend this mess, and then put our ideas into action so they persist in physical reality.

The first step we must take is rejection of the weepy mentality. We do not need depression for there is no reason to be depressed. Yes, humanity is destroying its world, but that is already written in stone and cannot be changed until our numbers are reduced. Yes, most people are stupid, but they will be unable to resist that reduction. Let the dying face the fate it has chosen, especially since it considers itself so clever; we don’t need its addictive, negative emotions dressed up as some hip radio program.

Look toward the future with a smile. Underneath that smile, make sure there’s a grin of determination and playfulness. What collapses around you has been fated to die for centuries if not longer, because its design is adapted to human emotional neediness and not reality. As it falls away, spaces open for us to create something new and better.