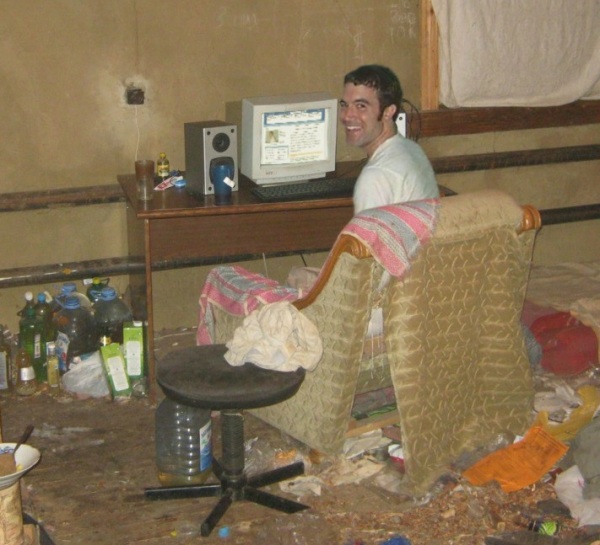 Poor humankind! Stranded in a problem of its own creation and, since nothing has been done to fix it, now in the vortex of a whirlpool to inconsequence. Some say it’s impossible that this could go away – this seemingly eternal network of stores, homes, roads, wires – but others point out how it’s a house of cards that could easily sag and fall if any one of its foundations went away. And sad, sad humanity: many of its foundations are merely concepts.

In our busy and “important” modern world, everything is done for a reason. Therein is the problem. Our reasons must be material, tangible: it makes profit, people like it, it achieves a result, it changes a number on a spreadsheet somewhere. There is no room for experience that justifies itself, such as falling in love, walking on a starry night, the thrill and horror of battle, the fresh scent of springtime in the forest. All must produce measurable results, as in a museum, and must justify itself according to the overall goals of (a) money or (b) popularity. Consequently, we learn from an early age to lie and claim almost anything will produce those goals.

We have forgotten how to enjoy life, and where we could be kings of our world, instead we are renters. That which does not have a justification is entirely off our radar, and invisible, and therefore those who choose to pursue it are seen by us as insane, or simply hobbyists. We wish they’d just get jobs and compete like the rest. There must be something wrong with them, because they don’t do what the herd acknowledges – we all agree, right? – is the smart path for an individual to take. And anyone thinking outside of the individual? A nutcase, really.

The best part about our experienceless modern system is that we apply it to ourselves. It does not have a single leader or center of authority which can fall; instead, by all of us working for our own material interests, it is upheld. Whether we work as janitors or CEOs, we apply the same dogma onto everyone else. And it’s good we do that – it keeps the system running, and without it, we’d be living in caves or something. I think. If you don’t work for your own interests, someone else will come along and take them from you, 100% legally, of course. This is a type of evolution that’s better than evolution; we call it Social Darwinism.

Experience, you see, has no function. It doesn’t produce anything. Where is the product rolling off the assembly line, the dollar signs, or the ad on TV? If you pursue things like experience, it’s like being a drug addict, and you impoverish yourself with nothing to show for it, because the rest of us aren’t that deluded. We’re going to get while the going’s good, because you never know how long this whole gig will last. Do you?

We are unwilling to assess difference in the value of people publically. It is offensive; it violates that idea that we are each a world-in-himself, or something that, regardless of raw material, could rise to be an Emperor or simply be a Janitor. Regardless, even if we hate Janitors and think they’re scummy, we pretend in public that all of us are important, even though many of us can be replaced by other workers, cheaper workers from the third world, or still-cheaper robots. This cannot be mentioned out loud. Publically, we do not acknowledge there is any difference in worth between individuals.

Because we cannot compare individuals, we accept anyone (can you imagine a CPU that could not compare numbers? it would be an ineffective computer). Because we must accept anyone, we keep up the fiction that all of us are equal, in public, of course. But because our power is affirmed in public places, it’s now part of our politics: you are all equal, and all important, and all can be anything from a Janitor to an Emperor – there were no born Emperors, nor born Janitors. All are free. Et cetera. Because we cannot point out one person as more important than another, we are dominated by idiots.

Think about it: if you cannot reject any ideas, you must find a compromise that accepts all ideas except the blatantly insane (I must murder my six children for Satan). The only compromise you will find is an ideology that suggests acceptance of all ideas. A big loop? You got it; and the compromise becomes the lowest common denominator, so everything is dumbed down and soon even the smart people start behaving like idiots. Ah, equality – akin to mediocrity, and fed by our egos, and our need to be recognized, and to deny – deny! deny! – our own bodies contain our minds, because if that were true, not only would death be significant, but we would also each be marked as Janitor, Emperor or in-between since before birth. Not fair – it reeks of death – send it away.

There will always be more idiots than smart people. If you give them equal power, soon they drag everything down to their level. Then mediocrity invades. Mediocrity constrains growth of better things, but encourages growth of population and economy. Our technology grows, but it is applied in mediocre ways; people seem to have empty eye sockets and numb cerebral cavities. Are they zombies? One thing is for sure: they have made us all slaves to their lowest common function.

We are truly slaves to the mediocre. There is nothing to be done, but take away their power, or kill them – really, who will care which in 500 years, if humanity is to survive? When someone dies, they fall out of our memory, and it is alright, since more people are born. We have no shortage of people. But most of the new ones are idiots, and the percentage is rising, since to be a non-idiot in this society is to go insane. They will make us all slaves to mediocrity. Forget class war, forget race war, it’s time for eugenic war – if all the idiots died, it would become legal to think again.

What I Desire | Abstraction or Reality?