Winter Is Coming Part I: What is an SHTF Event 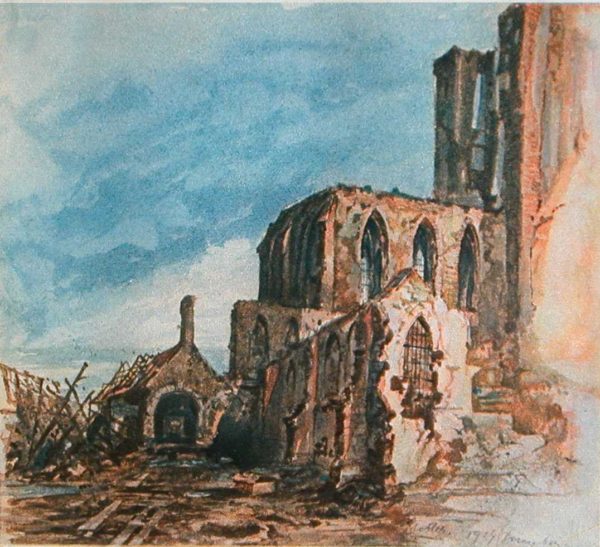 Iâ€™ve borrowed a motif from a large, obnoxious Leftist slob. Not the one from Flint MI, but rather George R. R. Martin instead. It is his motto for House Stark from his Song of Fire and Ice novels.

As society in America declines and grows worse, this meme of coming troubles fits our time too well for me to quibble over Martinâ€™s Maoist political beliefs. The meme fits what is happening regardless of whether he ever finishes his septology of novels or not.

Since winter seems to be coming, getting ready may seem like a logical consequentialist strategy. Therefore I hope to embark on what will be a logical intelligent discussion of disaster preparation before the early frost kills our herbaceous borders. Today I offer part I, “What is a SHTF Event?”

When people think of prepping or planning for SHTF, there is a stupid, popular tendency to just assume these are morons who have spent too many hours playing Fallout on their PC and are just LARPING their (((end of days))) fantasies. This is inaccurate. SHTF events occur every year in several places around the globe. They also occur in scales of calamity. Prepping on at least some level is a wise and beneficial decision I would commend to all of you.

As America morphs into Amerika, SHTF events will continue at the same rate they occurred before the decline set in. There will be no more SHTF events and no fewer. The difference between these events occurring in America; as opposed to Amerika, is the extent to which you will be on your own as society continues its selfish degeneration into solipsistic crowdism. Hurricane Katrina, The Alabama Tornado Spree of 2011 and the Eruption of Mt. Saint Helens were all three SHTF events of varying magnitude that would have befallen people in the contiguous 48 states regardless of how well or poorly our society functioned.

The impacts on society differed. Hurricane Katrina was the worst of the three for two reasons. It struck a dense population. That populationâ€™s leadership and government on every level performed execrably. The Mayor delayed ordering evacuation until 24 hours before the storm hit. If youâ€™ve ever been on the I-10 Bridge heading west the morning after a big party, you know that was the wrong call. So a city so shot through with corruption that a good chunk of its police force couldnâ€™t be bothered to show up for duty and even looted a Walmart during the storm, left an awful lot of its people to quite literally sink or swim.

The Alabama Tornado Outbreak was also tragic, but less a disaster. The local governments responding were hampered by a lack of resources and pre-planning. Many public officials throughout Alabama could be justifiably criticized in that regard.

However, they didnâ€™t loot any Walmarts and nobody on the Tuscaloosa police force deserted in the aftermath of the F5 that ripped through the downtown. There were one to two week aftermaths in places all over Alabama where the power was out and roads were blocked for miles. One advantage Alabama had over New Orleans was that volunteers came in waves to saw the roads clear and clean up the debris.

The point being, that places where order breaks down and the community is disinterested in mutual assistance will suffer a far worse fate from a SHTF event than places where people are being turned away as volunteers because there isnâ€™t enough food to feed them or equipment to put them all to work in a gainful fashion. So as society degenerates, it is less and less unintelligent to prep for at least some form of SHTF event.

The worse our culture becomes, the more you will be on your own to look after yourself, your family and the people you care about. Letâ€™s first address what you prepare for. SHTF events can be measure on the Bi-dimensional Feke Scale* from F1 to F5 depending upon length and severity. The scale is shown below. 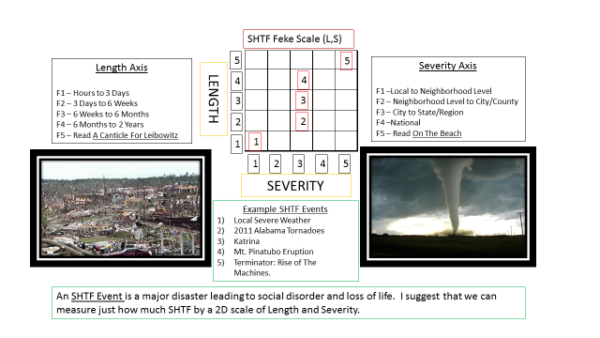 The Length Scale addresses the length of time normal society is disrupted by the event. F1 events are acute, non-recurring events that hit and then move on. F2 and F3 events occur for progressively longer time scales and require greater preparation or outside help to survive. F4 events probably cannot be survived without prior preparation and will significantly impact the culture and history of an area from the time length of social disruption alone. F5 SHTF events are historical milestones that are burned into cultural memory. Think WWI, WWII and the Great Depression. For much of Europe, the time span from 1936 to 1950 could be viewed as a F5 Length SHTF Event.

The Severity Scale attempts to categorize how wide spread the fertilizer becomes once it blows off the oscillating rotary device. F1 events impact the vicinity around you. F2 events take out/ take down entire local regions. F3 events reduce us to maybe 48 or 49 states instead of 50 for a while. F4 events hammer an entire nation or continent while F5 events impact the entire globe.

An F(1,1) would be a major storm or tornado that damages houses and threatens lives but then blows away. The Alabama Tornado Outbreak of 2011 would be about an F(2,3). It killed 300 people and knocked the power grid out, but was over in 3 weeks and never posed an existential threat to life and limb once the storms subsided. Katrina could go up to F(3,3). The Yellowstone Caldera blowing up would rate F(4,4) or F(5,4). The thermonuclear Shoah-Jobs portrayed in A Canticle For Leibowitz or On The Beach would score F(5,5).

Thus, an SHTF event involves some form of major natural or manmade disaster that causes destruction, loss of life and a breakdown of social order. These can classified using a standard risk cube scaled from 1 to 5. The two axis of SHTF can be Length and Severity. The length axis measures for how long social order is disrupted, the severity axis measures how wide of an area will be torn up or non-functional. In the next piece Iâ€™ll discuss some of the types of SHTF events that may occur in â€œWinter Is Coming Part II â€“ Classifying SHTF Events By Type.â€

Prince Is Felled By The Hollywood Dichotomy | Batman vs. Superman, Social Justice and Anti-Semitism