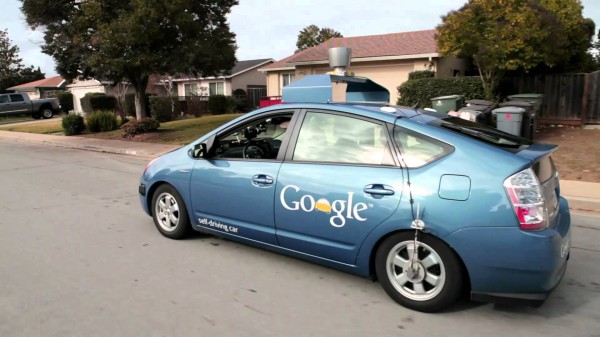 The rise of the machines continues. Right now we have a self-driving car in the works that is apparently safe enough to be street legal. It scans the world around it using 64 lasers to produce a constant topographical map through which it navigates using GPS and road data.

People get nervous when this happens. Who really trusts the machines? Not just the type of scary scenario as found in 1984’s Runaway, perhaps Gene Simmons’ best appearance on film, but the everyday ability of machines to screw up, get hacked, misjudge or just go haywire.

Even more, the self-driving car presents a view into the division of human thought. There is knowledge of what is, and knowing what to do about it. The self-driving car for example is very good at driving, and can even find the route there, but how does it know where to go? We can set up the computers to do anything, but in all aspects, that is a question of knowledge of what is. We still don’t know what to do about it, or in human terms, what goals and values we should have. That belongs to a discipline still far removed from the digital machines of the self-driving car.

The question of goals and values is one feared by most people. It is tied intimately with death and with the question of whether our lives were worthwhile. When we can’t tackle that, we focus on self-driving cars and try to make them stand in for us as a type of direction. For the past two centuries, we have chased industry (technology) and administration in the hope that our method can stand-in for our goals (which we no longer have). With equality as our focus thanks to the French Revolution in 1789, we can no longer have goals unless the majority of our citizens share them. Since majorities do not form around anything but threats or benefits, this translates to no actual goal, only a reshuffling of the deck chairs on the Titanic so that everyone gets a piece of the pie.

Ultimately the question of politics distills to this question of a goal, which is tied to values, and then the question of method which comes with it. When we choose to have a goal, leadership becomes important. The crux of politics is to be found in this question: how do we achieve good leadership? Our hope with democracy and capitalism has been to produce a self-driving car, e.g. a system that “automagically” selects the best leader based on who is popular. However, popularity is a lowest common denominator based on what flatters the self-opinion of others, and thus popularity becomes a quest to evade reality not confront it.

In this light, the debate over totalitarianism, democracy, monarchism, et al. takes second place to the primal question of leadership, which is How do we get good people in positions of power? Agnosticism toward political systems makes sense here in that those are secondary as they are designed to be means to the end of good leadership, not leadership in itself. The healthiest political sentiment might voice itself as a will to brush those concerns aside and focus only on who are the natural leaders among us, and how to promote them to power. In first world nations, good leaders are far-sighted; in third world nations, they are warlords and capos.

The debate over political systems is an artifact of progressive ideology which emerged from the Enlightenment. In this view, humanity changes as the year numbers do, and we emerge from the requirements of the past — life as nasty, brutish and short — into a time when we are all enlightened beings. But that mode of thought has died, as Richard Fernandez points out:

It was consistent with the view that mankind had entered a kind of post-historical phase, where no one, not even Vladimir Putin, could possibly revert to the 19th century mode any more. In this brave new world, the only problems left to fix were Global Warming and establishing Universal Health Care. In line with that enlightened view Europe not only neglected its defense, it acted as if none was necessary…

A Western elite that was no longer interested in war found that war was still interested in it. It discovered that mankind believed to have been transformed by the turning of the calendar was the same old grasping, greedy and violent collection of individuals described in the Bhagavad-gita or the Bible. It has not yet come to terms with this turn of events.

A conservative viewing our time might see the late 20th century shuffle over political systems to be a distraction. The question is leadership, not mechanisms. Our efforts to find a self-driving car for politics have failed as the past century of world wars and corruption — and our own consistently declining fortunes as our nations are less unified and more kleptocratic — should show us. We cannot substitute method for goal. We cannot substitute political system for good leadership. We need to cut out the middle man, and simply select our best and follow them to whatever end.

Why the Dark Enlightenment and Orthosphere have faded | In Memorial of H.P. Lovecraft, the Philosopher of Terror