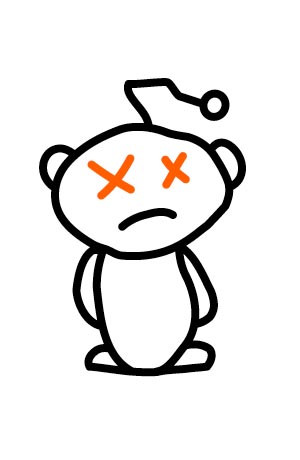 You’ll never find as good a metaphor for the modern time as social news aggregators (SNAs) like Digg, Reddit and Fark.

On these, news items are posted, and users vote on them — with the pretend-I’m-a-Roman-Emperor thumb up or down — and the most popular ones rise to the top of the homepage.

When first founded, these services at first attract people who want actual news and informative reading. They know that big media news panders to the dummy audience that wants bread and circuses. Instead, they want to be ahead of the curve.

If you’re starting a business, or just trying to stay interested in life, finding good news is important and a social news aggregator can do it for you — if the audience is game. But over time, as word spreads, entropy strikes.

What happens is familiar to anyone who knows our modern cycle of trend-product-decline-conform:

What happened at Reddit was the flip side of this: while the process was the same, it wasn’t done for dollars — in fact, it’s amazing Reddit is solvent. Instead, it was done for popularity, because there’s no use to having an SNA if your links aren’t popular.

Popular links means high Google rank, which means that indirectly, you influence the market by determining what comes up when Joe Consumer goes to a browser and types in keywords.

At some point, the Crowd found Reddit — and by the Crowd, I mean that large group of people who have no point in life but to please themselves. Smart people have a purpose, whether selfless or otherwise, but it generally involves achievement: inventing technologies, making music, painting art, climbing mountains, running non-profits, you name it.

The Crowd has nothing but their day jobs, a pattern of acting for their own pleasure only, and to compensate for how low that makes them feel, an axe to grind against society. They’re drones who like to find some reason to “be important,” which since they do nothing, is unrelated to what they produce. Instead, it’s related to the opinions they have, the memes they know, how clever they are and so on.

An artificial appropriation of different styles from different eras, the hipster represents the end of Western civilization — a culture lost in the superficiality of its past and unable to create any new meaning. Not only is it unsustainable, it is suicidal. While previous youth movements have challenged the dysfunction and decadence of their elders, today we have the “hipster” — a youth subculture that mirrors the doomed shallowness of mainstream society. – Adbusters

In pursuit of popularity, Reddit went from being a community of leaders and smart people to a playground for the Crowd. The Crowd don’t want cutting-edge news; they want ideas that make them comfortable being themselves. A partial list:

More specifically, the Crowd likes anything that is both inclusive and selective, meaning that you need to know the password to enter. Want to be cool in indie rock circles? Talk about Deerhoof. Want to be accepted on the far left? Talk about Alinsky. Want to have the guys like you at the local sports bar? Talk about how Roethlisberger is innocent.

In other words, the Crowd is like other in-groups in that it is a social group with implications beyond socialization between individuals. For example, people base their political, economic and personal lifestyle decisions on social influences, and these in turn have influences in the society at large.

Kuran begins with a simple, even mundane point: social pressures can make people say that they want and believe something that they really don’t want or believe. In a Communist regime, for example, almost everyone may talk about the enormous wisdom and virtue of the leaders of the Party, even though almost everyone thinks that the leaders are scoundrels and fools. In a small town in America, nearly everyone may attend and pray in church, even if many people are unsure whether they believe in God. The result of social pressures is to produce what Kuran calls “preference falsification,” a phenomenon that occurs when you make an inaccurate public statement about your actual preferences (or beliefs). Falsified preferences might be described more simply, of course, as lies; but they are a distinctive, and distinctly interesting, kind of lies, with particular social implications. – TNR

I don’t think this process is unique to Reddit. I think it’s human entropy, which is a subset of entropy, which is that over time organization is lost. Things decay and break down. In the case of human systems, we forget what our symbols mean, and start acting to gain symbolic power instead of achieve things in reality.

To demonstrate this, one Redditor did a did a little experiment.

He or she compared the replies to the exact same article with a four-year gap between submissions. The 2006 version of the thread could be compared side-by-side with the 2010 version. The result? The 2006 thread had insightful mathematics, historical comparisons and analysis; the 2010 version, a competition to repeat as many clever memes and familiar jokes as possible.

On Reddit, when people stopped caring about being an informative news source, the 4chan-style memes, lolcats, stupid preaching to the choir articles, and other chaff floated in, destroying what made Reddit a great resource.

Now what’s left is a Crowd of people who want to see things that confirm what they already believe. I call it the Reddit Hivemind Groupthink (RHG) because it has attributes of all of these buzzwords. It’s an in-group based not on who you know, but what opinions and likes/dislikes you have, geared toward the manchild or other dependent of the entertainment economy.

It’s sad because it eliminates a news source, but inevitable because once anything gets popular, it becomes a trend and then people get onboard who have no idea what made it originally valuable. They then make it into what is convenient for them, which since they lack direction and live in denial, is whatever doesn’t offend their lifestyles.

While today’s Redditors want you to think they’re enlightened savants bringing us the truth against the wishes of an oppressive right-wing government, the truth is that they have declined much like “Anonymous” did at 4chan. They lost their impetus because they became inward looking. On the internet, they’re superstars. In reality they’re boring people with boring jobs, selfish hobbies, inflated self image and an unquenchable anger toward anyone who has more than they do.

This isn’t the first time I’ve seen a community sink this way. In fact, it’s how all communities sink, barring getting outright confiscated by the FBI (as happened to several of the communities I frequented in the 1980s). They get crushed under their own weight, lose sight of what made them valuable, and become like every other played-out trend, more detritus of a society moving too fast for its own good.