Satan hides in our own eyes 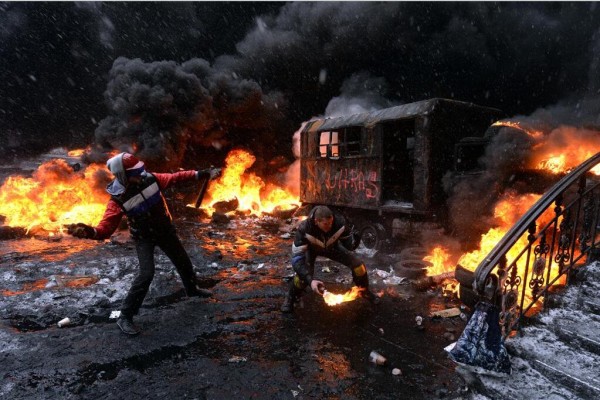 Wherever I wander, there is always Satan, lurking in doorways and the shadows of obese people.

I am told by people who have degrees than I have toes that he is everywhere, in varied forms. Global warming. Inequality. Racism. Terrorism. Intolerance. The 1%. Haters.

No matter how far I wander, he is there. In a desolate and lonely field miles from civilization, the Coca-Cola can. The dumped 55 gallon barrel of who-knows-what. A skull, empty and sightless through the third eye opened in its forehead by a bullet hole.

Even those who are highly scientific know Satan and proclaim his works daily. We would be enlightened, except for the Koch brothers anti-climate change agenda. People deny the obvious cost benefit of a broad pool of payers, which reduces costs to the mean. People are just ignorant, and motivated by hate.

I have also run into those who claim inspiration by a literal Satan. Almost all of these have a simple message: society is lies designed to chain the strong for the benefit of the weak; deny these lies, which requires being a total pariah and stepping outside the bounds of normalcy.

And I, useless to the bone, ponder. Measure twice, cut once. But when the measurement is so abstract and yet so earthy at once, twice is an eternity. I continue to think as the stars coat the sky in glittering light.

On reflection, it seems to me that Satan is dead and always has been. He may have been a rebel angel, once, but now he’s a shut-in lurking in the depths of Hell, probably eating TV dinners and cursing at re-runs on a tiny television screen.

However, evil is with us. But the first illusion of evil is that it exists. That is to say: almost no one — barring a few mental cases — intends to do evil. Evil is a byproduct of them doing what is convenient for themselves by ignoring what is necessary for the whole.

For example, I sure would like five grand without taxes. I am fairly certain that if I go to the right (wrong) parts of town, nose around a bit, and meet the right people, I can get five thousand dollars a night for dumping toxic waste out in the country. They’ll give me a truck, half the cash up front, a warning and send me off. I could retire in a couple years doing this, and there’s almost no chance of getting caught.

If I were to ignore the fact that dumping toxic waste results in a great evil, which is a toxicity of earth and a blaspheming of the gift of nature and life itself, then I could partake of this easy cash. This is a black-and-white line, which it itself a Satanic opinion according to many people: you either ignore the whole for personal convenience, or you don’t.

It reminds me of the old joke. A man sees a pretty woman and asks her out, but she turns him down. Fortified with liquid courage, he returns and asks her if she’ll sleep with him for a hundred dollars. Indignantly, she says no. He then sheepishly admits that he’s very wealthy and wants to take her to the Seychelles for a vacation, fine food, wine and luxury, but he can only do it if she goes as his girlfriend. She agrees. He then says, “Well, now we know you’re a whore… and we’re just negotiating on price.”

It’s the same way with humanity. We are either whores to our own convenience, or not. The results of being a whore to our own convenience is like the result of whoredom in general, which is social breakdown and long-term effects that will destroy the health, hope and happiness of our descendants. We can blame Satan for it, sure. And most people will. But Satan is deaf, dumb and blind to these things.

Our great evil — the Satan that follows us like a nagging doubt — is our own illusion and the bad choices we make. It is not Satan who marks up our cities with graffiti. It is not wealth that makes people greedy and horrible. It is people acting for their own convenience at the expense of long-term consequences, which can only be expressed as ideas and are thus intangible.

Tell me, what is the value of children playing in innocence on a broad summer day in a beautiful and healthy world, where they can expect a social order that rewards the good and smites the bad? Contrast this to children playing in the filth of the third world, in a dysfunctional social order, where their future is blighted by toxic diseases and corruption. Those are your two choices. You either act for the bigger idea, or you give in to your personal Satan and condemn your society to third-world squalor.