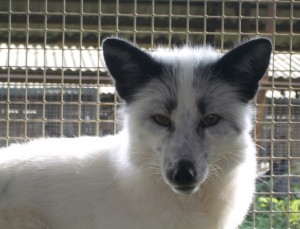 Of all the crazy scientific experments performed by the Soviets, one of the more interesting is their exploration of evolution using foxes, performed despite the ideological opposition to evolutionary theory.

Led by a biologist named Dmitry Belyaev, researchers at the nearby Institute of Cytology and Genetics gathered up 130 foxes from fur farms. They then began breeding them with the goal of re-creating the evolution of wolves into dogs, a transformation that began more than 15,000 years ago. â€“Â National Geographic

Explained simply, one half of evolution is the creation of new genetic material, which builds and directs new forms and mehaviours. The other half is the determination of what genetic material will be replicatedâ€”which forms and behaviours will be present in future generations. This experiment operated on that second half by artificially selecting a desired trait.

With each generation of fox kits, Belyaev and his colleagues tested their reactions to human contact, selecting those most approachable to breed for the next generation. By the mid-1960s the experiment was working beyond what he could’ve imagined. They were producing foxes like Mavrik, not just unafraid of humans but actively seeking to bond with them.

The populations of the later generations had DNA that produced domestic foxes. Where did these domestic genes come from? The length of the experiment is too short for mutation to occur (by a long shot), so all the DNA in the resulting domestic foxes must have been present in the initial population, already existing and available to be selected.

But the initial foxes were not domestic. Not in general, and also not any single one of the initial foxes was domestic. The process is not simply a matter of finding a tiny, rarely noticed minority of the population that is domestic and replicating them as a new domestic population. There must have been different degrees of domestication within the initial population, in order for some to be selected, but no wild fox is so domestic as to “actively seek to bond” with humans.

This points to an insight into evolution and heredity. The set of all alleles present in a population is an important determinant of the characteristics of a population, but just as important is the organization of the alleles within the population. The specific configuration present in an individual mattersâ€”a population is not just an undifferentiated mix of DNA.

In this case, domestic trait expression requires specific sequences of DNA to be present at several locations in the genome. Â Cut up that genome, take those same sequences and mix them around in a population so that only one is present in each individual and the domestic phenotype is lost, even though no DNA has been lost. We can see, from this, the self-deception possible when viewing populations through a microscope and noting the similarities at an undiscriminating molecular level.

In a paper in press in Behavior Genetics, the group reports finding two regions that are widely divergent in the two behavioral types and might thus harbor key domestication genes. Increasingly, it appears that domestication is driven not by a single gene but a suite of genetic changes. “Domestication,” the paper concludes, “appears to be a very complex phenotype.”

There’s another lesson to be learned:

Domesticated animals are known to share a common set of characteristics, a fact documented by Darwin in The Variation of Animals and Plants Under Domestication. They tend to be smaller, with floppier ears and curlier tails than their untamed progenitors. Such traits tend to make animals appear appealingly juvenile to humans. Their coats are sometimes spottedâ€”piebald, in scientific terminologyâ€”while their wild ancestors’ coats are solid.

In addition to the reminder that consequences other than those intended will always result, we can see that seemingly irrelevant traits can be indications of more fundamental differences.

Postmodernism | The ship of state