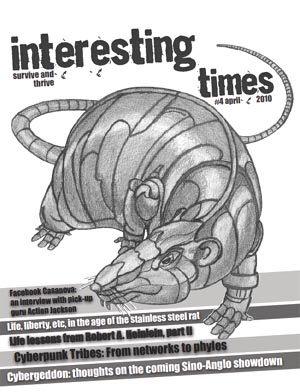 Not to geek out too much, but I’m published in the new Interesting Times magazine.

This PDF-based free magazine has a full magazine-style layout, but keeps the spirit of 1980s text files: exploratory like science fiction, irreverent like insurrection, and curious like a child.

The article I submitted, “Counter-Insurgency Lessons For the Modern First-World Citizen,” can be found in Issue Four provided courtesy of the Internet Archive, since the magazine appears to have dissolved sometime in the 2014-2017 era.

Economic karma | There’s a real world out there